Mayberry did very well during the night for her first night away from her mom. There were no spilled water buckets, no broken buckets and it was obvious that both of the fillies had laid down to sleep. They were glad to see me, very glad for their grain and were given a couple fresh buckets of water and a wheelbarrow load of hay before leaving on the walk this morning. Can you guess what we are doing in the picture below about half way into our walk? : 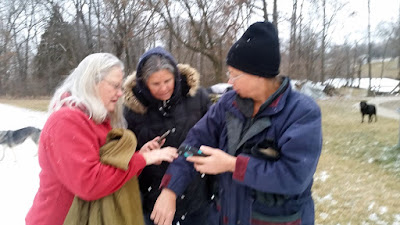 We were marveling at the beauty of each individual snow flake. The snow was coming down with such a beautiful variety of snowflakes each one more beautiful than the last. 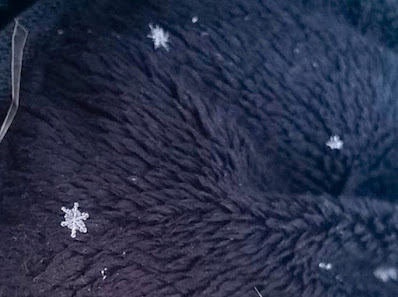 After the walk I needed to head up to the barn to clean the stall Irish's filly and Mayberry, Sheena's filly, were in. Not thinking about the date I drove all the way to the Peoria post office on State street to pick up the Berean mail. When I pulled in I was surprised to see only 1 car in the parking lot. The last few Monday's that place has been packed. Well the reason for 1 car in the parking lot was because it was closed for Marten Luther holiday.  That was almost a wasted drive except on the way home I stopped at Dollar Tree and bought 10 mugs then Kroger to pick out a nice coffee cake for the Berean treat.  When I got home Mike was up at the barn and with his help both of the fillies were moved out of the stall into a paddockwith the other weanlings. I'm very impressed with how quickly Mayberry is adjusting to weaning. Diane sent the forms for our new wills which needed to be looked over before our 1:00 pm meeting at the law office to sign them. We now both have up to date wills. Mark's 2:00 pm appointment cancelled so he came home and went to work on the poor silver Maple tree. This tree has been losing limbs and the ice storm really did a number on it. The tree is so huge that when the first big limb fell down this summer we filled the wood box. 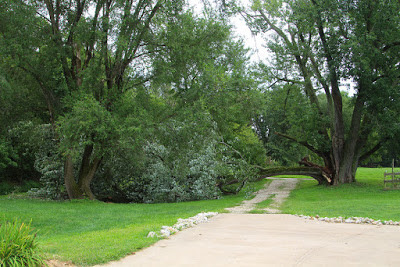 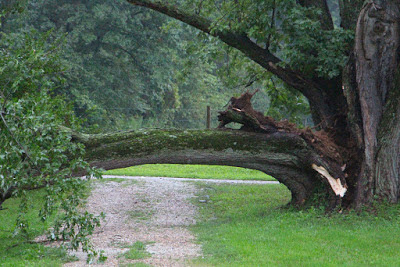 Then came the ice storm when another huge limb fell across the drive smashing down the fence into the stallion pasture. 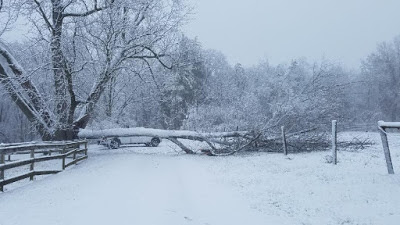 Mark waited a few days until some of the ice melted before cutting it up and hauling it to the wood shed. 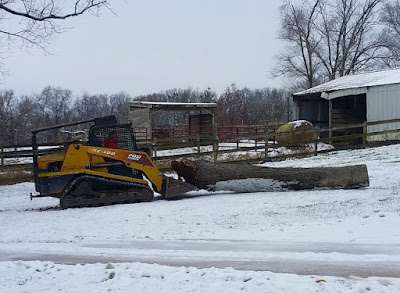 Well this afternoon he got to work on the next big branch that had been damaged in the ice storm and took down 2 more big limbs. There really isn't much left of the tree after today. 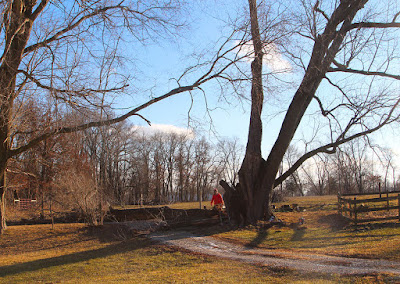 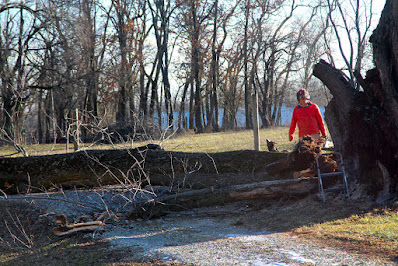 The driveway will stay closed probably until the weekend when Mark will use his trusty chain saw and handy skid steer to cut it up in pieces small enough to haul away. This is not the best firewood but we will still use it and it will still put out heat when burned. This evening Diane and I worked on the 2020 Horsemeister books. Russ Rumbold is coming tomorrow to do the taxes and this must be done before he gets here.
Posted by Judy Sceggel at 7:44 PM