It was lightly snowing again this morning. Only a little is accumulating each day and each day most of the snow melts off. We left for church around 9:15 am. David had the message. If you would like to hear the message you can listen to it below.

After church Mike and Matt went to Middle Grove to pick up Mayberry, Sheena's filly by Valiant. It was past time for her to be weaned. The horses were all down by the red gate and they came running up so Mike and Matt loaded Mayberry first then Mike to Matt over to show him how to move bales in while they are in Middle Grove. Diane, Ruth and I played games until 2:00 pm then I headed home to prepare a stall for Mayberry then moved Irish's filly into that stall to keep her company. Mike and Matt arrived at the same time as Ben who came to pick up the fridge, Karin who came for a trail ride and Isaiah who also came for the trailer ride. Matt and Isaiah helped Ben load the fridge. Karin took Mayberry out of the stall then led her into the barn. Irish's filly was very glad to see her and both settled right in. They are on the monitor and both are quiet and relaxed. This has been the easiest weaning yet. Mayberry wasn't nursing much at all and Irish's filly is so very sweet. Taegan happened to come out to the barn to watch and Karin mentioned they have an extra horse if she would like to go on the trail ride. We walked into the barn just as they were saddling up the horses. Left to right is Magda getting ready to mount Irish, Isaiah saddling up Mika, Taegan saddling Oksana and Karin was getting a bridle for Ripper. 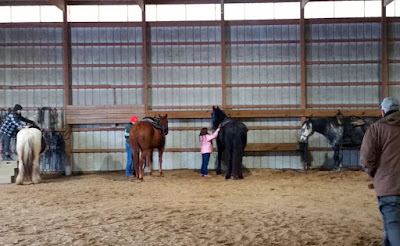 Below Magda was telling me about Irish's trail ride yesterday and how she cantered and galloped and was practically perfect! 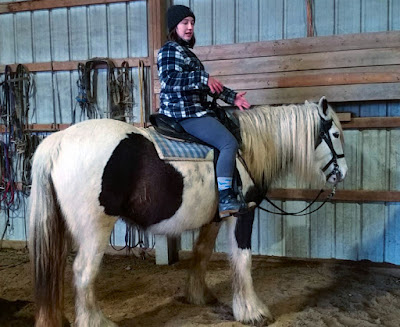 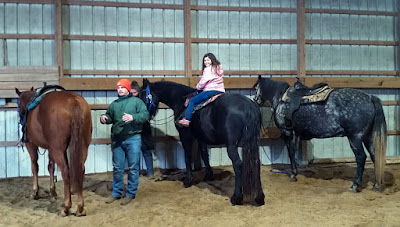 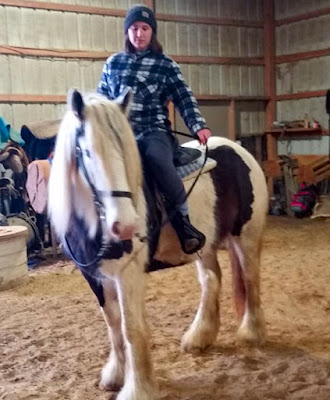 Taegan was pretty thrilled to get a chance to go on this trail ride and really likes riding Oksana. 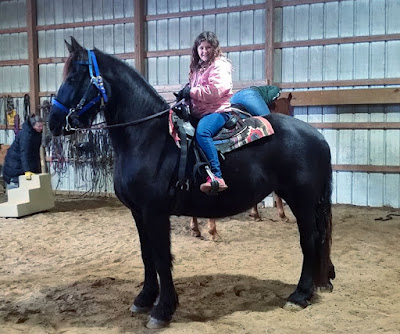 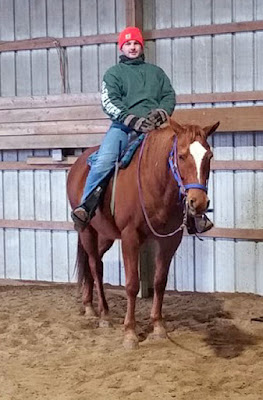 Below they are heading out on the trails. 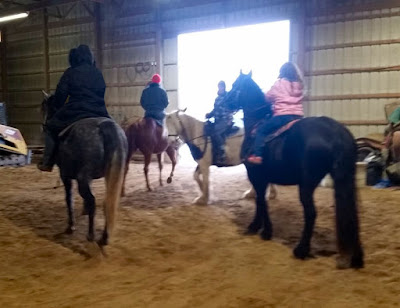 Everyone had a good time. For supper tonight we had Phil and Anna's family, Lee and Rhoda's family and Sarah and her girls. Nolan is still in Gulf Shores but is coming home soon. We enjoyed haystacks then played games after supper around the table. The 6 girls were playing so nicely in the rec room. They were playing school and even got grades. No pictures of that as we were enjoying visiting in the quiet living room. It was a very blessed Sunday.