Early this morning I placed a couple ads for Jewel's filly. The person that put down the deposit shortly after she was born first planned on paying for her and picking her up around Thanksgiving. They had been sent pictures, videos, emails, texts and phone calls and I hadn't heard from them so this morning I sent a text that I was relisting her. I placed a couple ads using the video below..

Before leaving I had one response for her asking if we knew anyone that could deliver her to Texas.  For the last couple days weather.com has been predicting snow, as much as 5 to 8 inches over the next few days with ice mixed in. At first it was suppose to start Sunday then Monday morning. Yesterday they bumped it back to Monday around noon. So this morning instead of walking I drove down to the Peoria post office early to pick up the Berean mail then to the Berean office to get all the Tuesday work done today. Bill Schick called as he was on his way to Mayo clinic to report the entire parking lot was ice covered already and with the ice and snow predicted to fall later today and tomorrow it would be dangerous, we decided to call off Berean. Anyone who did NOT get the text hopefully will read it here. NO BEREAN TOMORROW. I worked there until after lunch and was able to get all the studies processed and the Bible labels printed out. Bill will be back from Mayo Clinic later this week and will mail out the Bibles and studies as the postage has gone up on those and our meter needs to be changed. As I was finishing up my phone rang and it was the person that had put the deposit down on Jewel's filly. They promised to send money at the end of next week if I would just hold her for them. I agreed. As it wasn't snowing yet I dropped off a bunch of studies to be graded at Jerry and Marie's house then headed to Aldi. When I got home it still wasn't snowing yet so I brought in wood for the wood burner and got the fire started. Mark got home shortly after that. The owner of the colts that were supposed to be picked up today sent an email because of the storm expect the driver to arrive on Thursday so the colts were put out in the paddock. 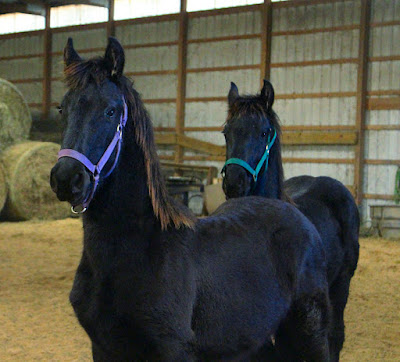 Forget this trying to keep them from getting muddy. Originally they were supposed to be picked up on Saturday then it was changed to Monday. They have been inside either stalls or the indoor arena since Friday and I'm tired of cleaning up after them. The owner is just going to have to deal with some mud. The lady from Texas wanting the filly was sent an email about the owner not wanting to lose her and they responded pretty quickly to please keep them informed in for some reason they don't send the money as she really wants her too. She really IS a pretty filly. 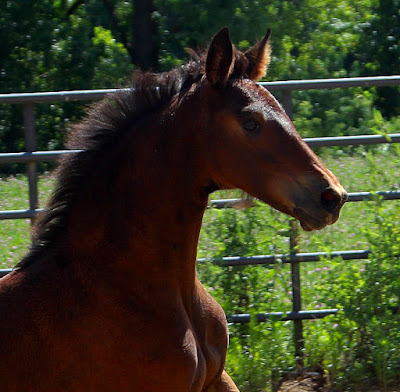 I guess it's nice to know these foals are still in demand.  The snow and sleet started this evening but it is still 31 degrees outside so more icy than fluffy snow. Our electricity has been flickering off and on all evening. Around 7:00 pm it went all the way out but came back on within a few minutes. The wind has kicked up which is probably causing the outages. I've already set the clocks back twice. Next time they can just stay off.  David's message on Acts 1 and 2 was downloaded today so I could listen again.
I was trying to listen to one of his other messages but the mp3 player on this computer just kept dying. I was able to download it then upload it as a video and finally was able to hear this one too. Below is his teaching on martyrdom and the Glory of Jesus.
Posted by Judy Sceggel at 7:57 PM