Phil and Anna arrived very early to get the barn organized for their crew today which consisted of David, Ben, Lee, Nolan and of course Phil and Anna. Ben brought Abe and Jace, David brought Israel and Elisabet and Anna brought Braelyn, Taegan and Kensley. The kids were put right to work making thankyou cards for their dad's and mom's. 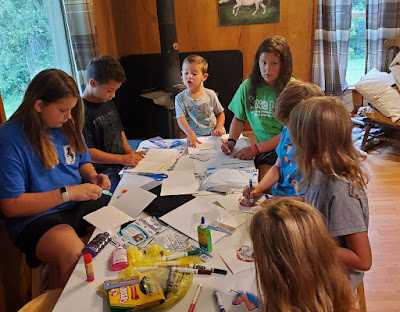 At 8:30 am the owners of the orphan colt arrived to pick him up and take him to his new home. He loaded up well and they sent a message once home that he traveled great.  The kids finished their cards and came walking over to the barn in the rain to deliver the cards. 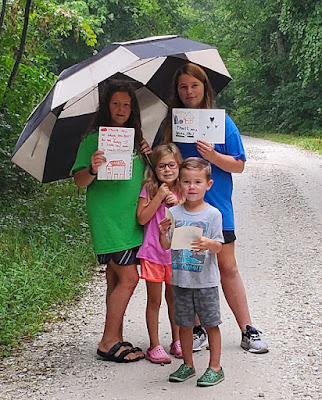 The guys and Anna were hard at work so we didn't give them the cards. 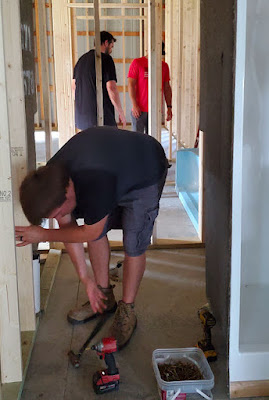 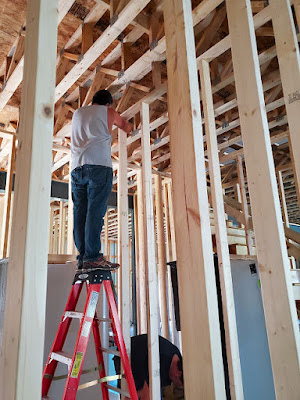 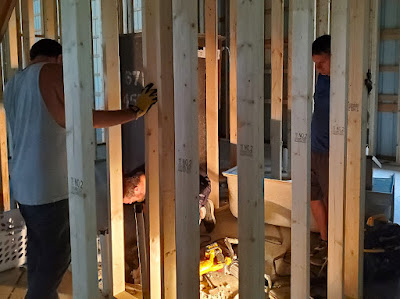 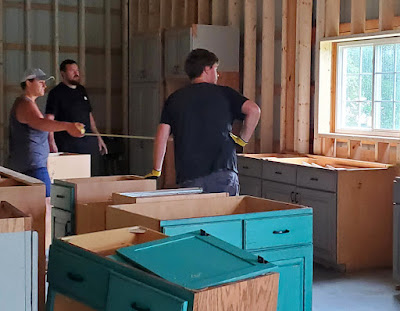 Below is a short video.
Since it was raining the kids were taken into the indoor arena to play on the hay bales. Elisabet and Abe were playing in the dust with some dinosaurs. 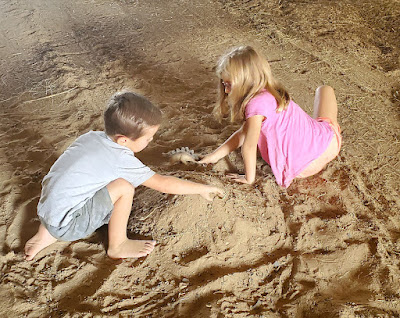 In the video below one can see exactly WHY these kids come back from grandma's house filthy.
Mark was spreading manure so a clip of that is in the video also. The sun came out so we took the car over to the playground. Braelyn is in the front seat, Israel is in the back seat and the other 5 are in the trunk. 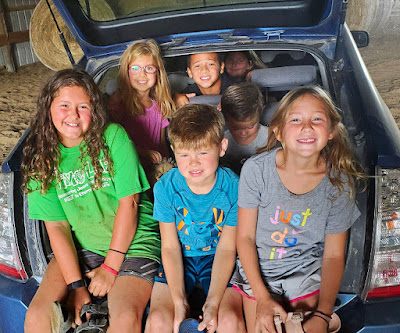 At 11:30 am lunch was ordered from the Warehouse. I was supposed to pick it up at 12:10 pm except the owner of Irish's colt arrived to finish paying him off and he also wanted to look at Indy's colt. I didn't leave until quarter after to get the lunch and by the time I got back the workers were at the house waiting for lunch. After lunch I went to Sam's club to pick up some food for Sunday dinner. When I left our house we had bright sunshine but when I arrived at Sam's it was pouring rain and the unbrella had been left in the house. I sat in the car and watched the rain until it slowed down to a trickle.
The rain followed me home and only some of the groceries were unloaded until it stopped. At 6:00 pm I took 3 rolls of paper towels, a 9 pack of toilet paper and a package of 300 napkins over to mom's house as they were running low on those. Karin had mom in the tub with the jets running and was just getting ready to wash her hair.  On the way back I stopped up at the barn to meet my airbnb guests and introduce them to the horses. It was a VERY good day.
Posted by Judy Sceggel at 8:55 PM