I went out early, just as it was starting to get light to feed the colt and saw Jury hanging around the back of Valiant's paddock. Indy, Oksana and Sheena were grazing near her. Indy's colt was laying down resting. 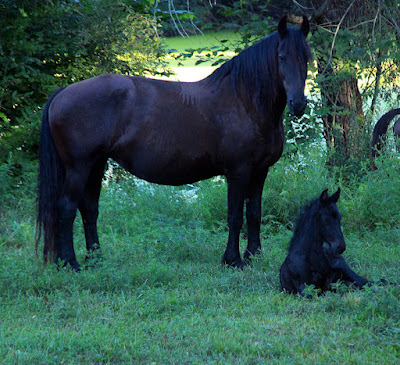 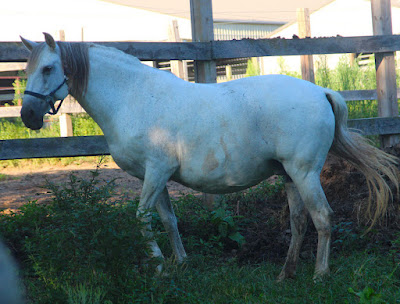 I took a few more pictures of Indy's colt before up to feed. 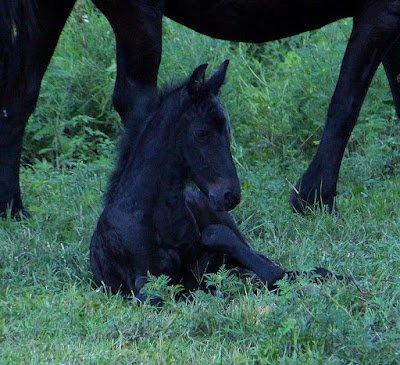 Indy saw me and started walking up to the fence so the colt got up and ran to catch up with her. 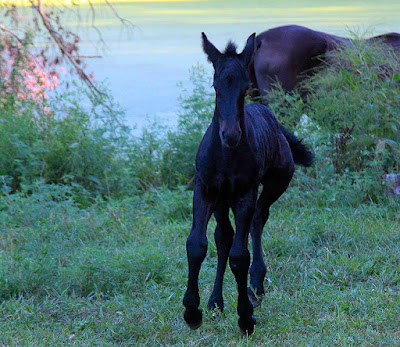 He is such a handsome fellow. 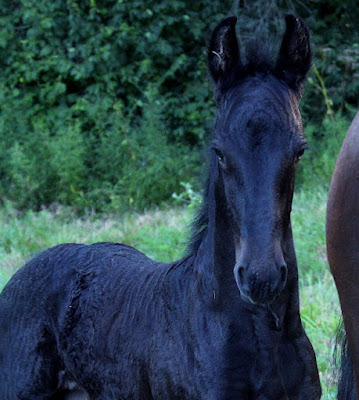 Valiant was up at the gate waiting for his grain. The horses were fed then I went in to give Mark a hair cut and make him breakfast then realized I was already a minute late for the walk so started driving to the dumpster when Ruth came walking down to meet me.  Diane is now in Gulf Shores so just the 2 of us walked over to meet Joan. After the walk Jury was teased and when she showed covered by Valiant. That sounds so easy but wasn't. She was tied  up to the breeding stand then I went to get Valiant's lead rope, the special breeding one with the chain but it wasn't hanging where I leave it. I searched all over before heading in to see if I could find one in the show containers. I found an old nylon one that could be used. The cotton ones are much better and I have a few of them somewhere. Valiant was very well behaved but even so I still won't try to use him for breeding without the cane and lead rope. Jury and Valiant were put away. The next mare teased was Sheena and still no sign of her coming in.  I decided to search more for the missing lead rope and found it. It had fallen off the stand into the grass, Mark weed whacked and the fallen grass and weeds had covered it up until just a bit of black was showing. I was VERY thankful I found it.  By this time it was almost 8:30 am so I quickly changed into a skirt and left for the Peoria post office to pick up the Berean mail where I used my debit card to pay the return fee on 2 Bibles. From there to the dentist for my 10:00 am appointment. I was 15 minutes early to that and worked on my phone trying to get maps up so I could use the navigate button when they called me in. It wasn't until I hopped up on the chair that I realized I had forgotten to change out of my barn tennis shoes and just started laughing. At least I hadn't cleaned stalls today or stepped into any big piles of manure. My teeth were cleaned and given a clean bill of health, no cavities and I was on my way to Aldi to pick up groceries for mom's house. Karin texted a list. When it came time to pay my debit card was inserted but the keypad was different. My fingers automatically did the same pattern I always use but the card was declined. I was shocked thinking I must be getting Alzheimer's and had typed in the wrong code. I was so flustered that I just used the credit card. Across the street is a CEFCU so I went there, drove to the ATM and withdrew money just to make sure I had the correct numbers.  From now on I can't just do a pattern but will need to actually LOOK at the numbers. There was a farmers market right there that had melons so I picked out two. After weighing them the cost was $10.50 and I handed the lady a $20.00 then searched for two quarters and once found handed them to her. She thanked me and shut the box up forgetting to give me the $10.00 back in change until I reminded her that I had given her a $20.00. She hesitated and I started doubting my memory until I remembered I only had a $5.00 a bill and a $20.00 in my wallet and the $20.00 was gone.  Such a crazy morning. When home and the groceries taken over to mom's Mark and I went out to the 5th wheel to fill the fresh water tank and empty the black and gray. We had done that on Saturday but the man renting said the fresh water was about out. I think the couple using the camper on Saturday night and Sunday morning must have left the water pump on and the toilet running as the black tank was 2/3 full. The next job was to clean out the 2021 Salem. That camper has a black water flush which  makes the job much easier. I was pretty hot and tired by the time I finished. Anna was up cleaning the apartment and the girls were over at the lake catching bull frogs with Berlica. The apartment booked for next Saturday and the 5th wheel is booked too. This is going to be a busy month.
Posted by Judy Sceggel at 8:15 PM