The day didn't start out well. I needed to be at mom's early and right after arriving Mike called to report Dr. Hoerr just called to say he had to put Loxley down.  Loxley just couldn't get over the diarrhea and this morning was not able to get up. For 2 weeks Dr. Hoerr fought hard to save his life. He was 8 weeks old when he got sick. It wasn't like he was a fragile newborn. 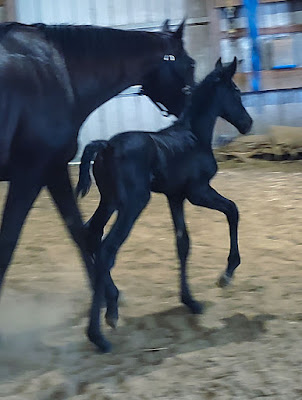 He lived 10 weeks and his last two weeks were spent in ICU. We are so sorry for Sheena and for Mike. This was to be his personal riding horse. This has been an unbelievably hard year for Horsemeister. He is pictured below on June 30th, strong, healthy and loving life. 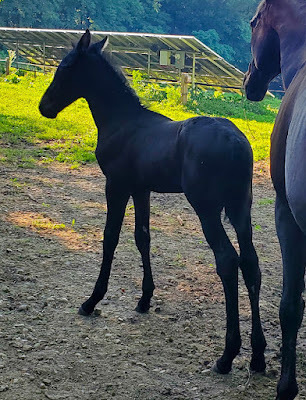 I sent Dr. Hoerr a message that I would be there around 3:00 pm to pick up Sheena. I asked if he could do an ultrasound but he wasn't able to get that done before I arrived.  Sheena's last cover was July 23rd, so she should be at 21 days now. Hopefully if she didn't settle she will show today.  I was supposed to stay with mom until 1:00 pm but Joan offered to take my place at noon so I could get the 5th wheel cleaned up before the next guest arrived.  Anna dropped the girls off at mom's this morning while she and Phil went to buy boards for the barn. When Joan arrived I took the girls straight up to the 5th wheel, grabbed the laundry, took that down to the  house and got it started then headed to Dollar General in Hanna City to pick up shampoo, conditioner, salt and pepper shakers for the camper and shoe laces for Mark. As we were getting close to 116 I was shocked to see a small plane coming down fast lower and lower. It looked like they were trying to land the plane on 116. Braelyn, Taegan and Kensley were with me and we were all shocked at how close it was. By the time I turned on 116 it had crashed right in front of Gils supper club. 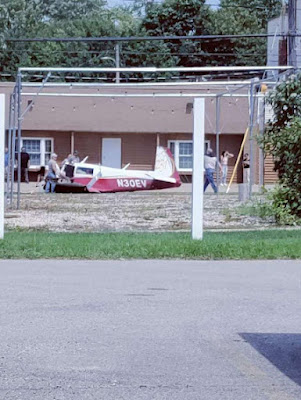 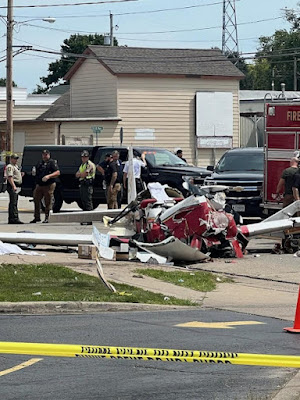 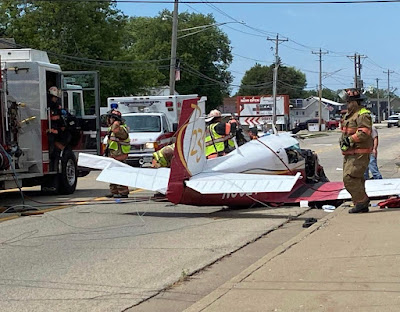 We found out later that both of the people in the plane died. The town was closed off for traffic. I took the picture below from Mike and Diane's office parking lot.

We  were all pretty shocked when we headed home. The girls helped get the 5th wheel cleaned up by cleaning out the fridge, scrubbing the shower, sinks, sweeping and scrubbing the floors, and as soon as the sheets and towels were finished drying helped make the bed. The next guests were sent the message that the camper was ready for them. The girls were taken down to the house where they started painting beautiful pictures. I took the car back up to the barn to hook the 2003 truck up to the horse trailer to pick up Sheena but I had the wrong hitch on so had to take that off and find a drop down hitch for the horse trailer. By the time I left it was already 2:45 pm so Dr. Hoerr was sent a text that I would be there in a half an hour. When I arrived he wasn't there but the clinic door was opened. I found Sheena's halter but couldn't find her lead rope so that must not have been left and because the old truck had been cleaned out for the camping trip there were no halters or leadropes in it. I found one of Dr. Hoerr's used that to put Sheena in the trailer, returned the lead rope and had just started the truck when Dr. Hoerr arrived. He had not been able to ultrasound Sheena, he had been out on an emergency but by this time it was almost 4:00 pm so we didn't take her back out of the trailer, she was very upset about being separated from Loxley and I was anxious to get home. Neither Mark or I had time to eat lunch and both of us were pretty hungry and Mark may or may not have been Hangry as I received a couple text from him about food. As soon as I pulled in Sheena was put in the paddock and I headed down to make supper. We were both pretty famished. After supper I made up a fruit bowl with oranges, bananas, grapes and added a couple blueberry muffins and some crumb cake and ran that up to the 5th wheel for the guests coming in, turned on the barn lights for them and made sure the camper lights were on as they sent the message that they would be coming in after dark. At 8:00 pm I headed out with the milk replacer to feed the colt and tease Sheena. She was teased, turned around and teased again and thankfully no sign of showing.
Posted by Judy Sceggel at 8:01 PM