I slept in again, not waking until 6:00 am. This could be turning into a habit. I think it has something to do with the days getting shorter but who knows, it could be I'm just getting lazy. I still got everything done in plenty of time. We left for church at 9:15 am. Mike and Diane served lunch today and Ruth brought mom a little early so they were already in the kitchen when we arrived.  Tim Roecker had the morning service. It was so very good for me to hear. He read in 1st Kings 17 then pulled a Mike Rieker and read the next two chapters so we got to read all about the miracle of the Ravens, the widow that cared for him, Elijah bringing the widow's son back to life and then the showdown with the prophets of Baal.  God really IS the God of impossible. Lunch went well, there was plenty of food for everyone.  David had the afternoon message on Psalm 110. IF you would like to see and hear this click HERE. Oh what a Savior we have. After church I dropped off Mark before taking mom home. Karin was waiting for her.  The lasagna started this morning in the two crock pots was done so both of those were turned off and some was dished up and taken over to mom's house for she and Karin along with cheese cake for their dessert. We had a storm come through that dumped a half of an inch of rain in a very short period of time but the storms all moved out of the area before the kids got here. Ben and Taunya had to cancel, State Farm lost power and Ben was called in. After supper we all headed over to the playground. The little ones went swimming joining Rebekah's children. 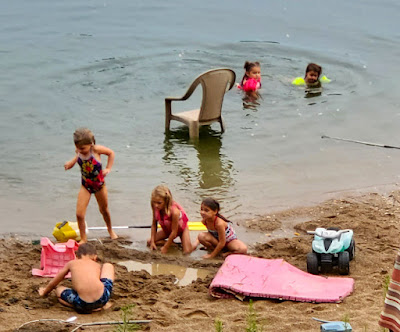 Nolan brought some friends out for volley ball and the games were fun to watch. Below are a couple action shots. 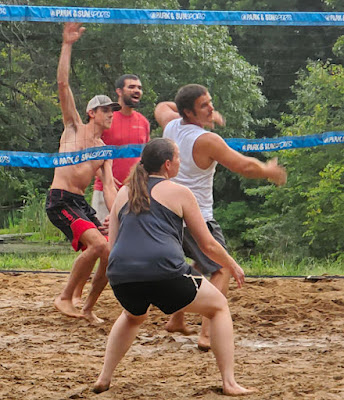 See that blur up by Nolan's head, that is the volley ball after a spike from Philip. 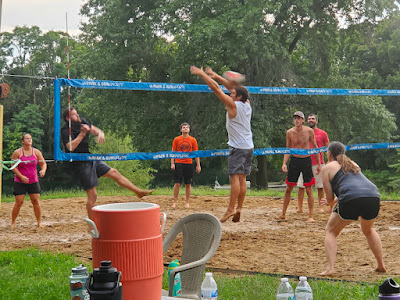 The little girls had fun picking the last of the flowers for their hair. 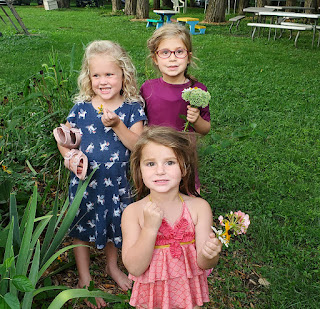 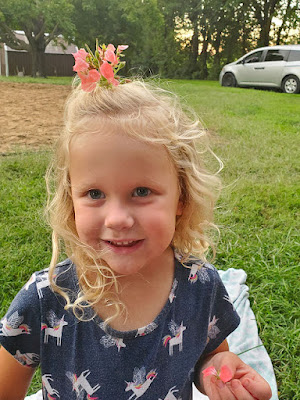 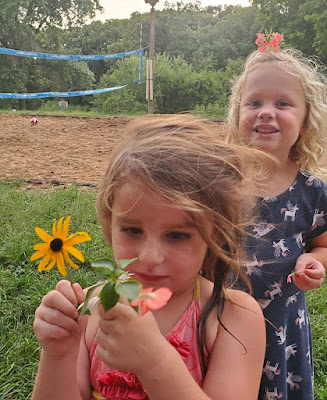 Diane and Mike had a group come too. They were all supposed to go bike riding but when the storms hit they decided to eat dinner at Gil's instead. They came walking over to the playground after dinner. Below is a short video of some of the activities and guests.
Zion came up from swimming and wanted a flower too. 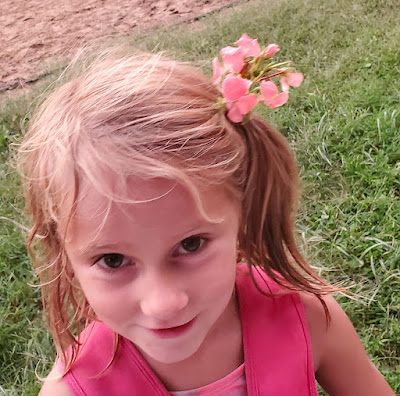 The girls put one in Anna's hair but I'm not sure she realized it was there. 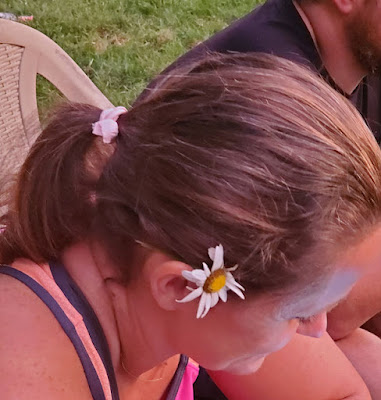 Joan arrived home from Florida so we had to visit and hear about their trip. It sounds like it was really wonderful. She went in to visit with mom. We stayed until dark before heading home. What a wonderful Sunday.
Posted by Judy Sceggel at 9:10 PM