It was deliciously cool this morning, only 59 degrees what a pleasant surprise. That made it easy to get the chores done and have the car over to mom's in time for the walk without being wet with sweat. We met Joan coming up the hill from her place. I quit my walk at mom's as I was down to stay with mom until 1:00 pm. Anna showed up before lunch to clean so I felt free to run to TSC to pick up 10 of those 50 pound bags of grain and 1 40 pound bag of black oil sunflower seeds. The sunflower seed bag was for mom's house.  I drove straight to mom's and unloaded the seeds then went to work making lunch for the both of us. A lot of Spark and Rhonda's grand children were here swimming and Berlica, Braelyn, Taegan and Kensley were quick to join them.

Mom and I went out on the balcony to watch them playing in the water. 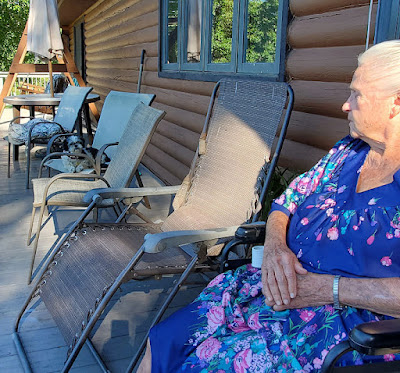 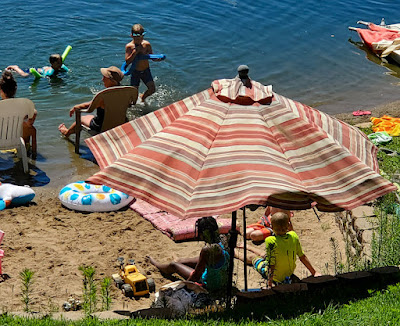 My other grandchildren all went hiking at Forest Park Nature Center. Rhoda sent back the pictures below after their hike. They were all tired out. 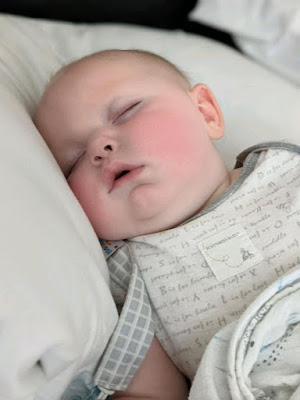 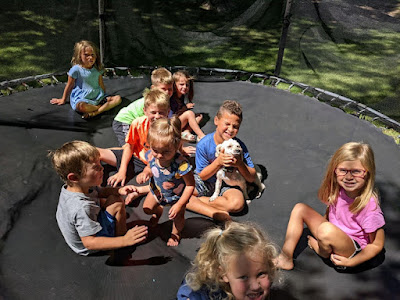 Rachel came to relieve me at 1:00 pm so the next job was to get the grain unloaded out of the car and put away in the breeding shed. There was only room for 8 bags there so the last two bags were taken to the feed stall in the stall barn. The cat was there waiting for her food. I had just walked in the door and was changing to head to Middle Grove when Karin called asking if I could come back to mom's for a couple hours. I was actually glad for the chance to quit working and drove right over. When I got home I drove to Dollar General to pick up some dishes for one of the campers but when I walked the entrance way there was a bunch of toys that looked like they were half off so I spent some time picking toys out the grandchildren would enjoy of which there were 2 glitter balls that when bounced would light up for $3.00 but since they were half off I decided to buy them. When I went to check out none of those toys were reduced. The check out lady told me they were just put there to make room for school supplies and the only things half off were the dishes. I told her I would just take the dishes, paid then left for home. After unloading I finally read the receipt which showed I paid for those two glitter balls. I drove back to Hanna City but there was a line up of people waiting to check out so instead of asking for my money back just told the check out lady I would take the 2 balls as they were already paid for. By the time I got home it was 5:30 pm. We ate a quick supper, jumped in the shower and both of us were ready to leave for church by 6:00 pm as Mark wanted to stop at the shop to grab something. David was teaching tonight so Israel and Elisabet sat with us. We were singing the first song when someone sat next to me. I looked over and it was Taegan and Braelyn. Joan brought them. That was such a nice surprise. After church we all went to Culvers for ice cream. We didn't get home until 9:30 pm and I still needed to run out to feed the colt. He is now fed and I am more than ready for bed. David's message will be downloaded tomorrow and posted. It was on Psalm 110.
Posted by Judy Sceggel at 10:06 PM