God Paints the Clouds In the Evening Sky

I didn't sleep well, maybe just took a few too many steps and bendovers yesterday.  Because of that it was hard to roll out of bed on time and I didn't but was up before 6:00 am.  Mark went out early to shut off the barn lights. Our airbnb guest for the 5th wheel didn't arrive until 10:40 pm so the light was left on all night.  He was very satisfied with his accommodations. Speaking of very satisfied another really nice review came in from the couple that stayed Friday and Saturday night. This is a wonderful retreat at a great value! Whether you have events in Peoria to tend to, or just want a quiet writer's retreat in the wilderness, Judy's property is well-located yet remote. You are surrounded by nature -- including gorgeous and friendly horses abound -- but also have great WiFi. My wife, puppy, and I all had a great time. Do yourself a favor and book this property post haste!  He also sent the note below: “Hi, Judy. As you know, we loved your place. Thanks for everything. Hope to get back down there soonest.” It makes me very happy when people really enjoy themselves here.  Diane, Ruth, Joan and I walked. The man that rented the Wildwood brought it back just as we were walking down Joan's drive. We waited while that was parked but that gave us plenty of time to talk about the weekend. Joan's trip to Branson was wonderful, Diane had a very nice time at Middle Grove on the lake, I told about our Sceggel vacation and Ruth told us about Fedi's sister Csilla who is in St. Francis in intensive care with a brain bleed. Prayers are appreciated for her. Right after the walk I headed down to the Peoria post office to pick up the Berean mail then from there to Sam's club to pick up some items for mom's house and a pie for the volunteers tomorrow at Berean. On the way home Mark called and needed me to bring his phone down to the shop. I stopped at Phil and Anna's and picked up Braelyn, Taegan and Kensley took them to my house to unload groceries then up to the barn to hook up the trailer to the truck. We took some grain with us in our pockets, two halters and two leadropes then headed to Middle Grove to pick up some mares and foals.  We first drove the truck and trailer back to the big field but no horses were in sight so went back to the gate parked the truck and started that long hike up the hill. They were all spread out grazing. Lily, the black mare with the big belly to the left on the picture below (she had colic surgery years ago) was obviously missing Mika. Her filly was playing with Irish's colt. At least I think it was her filly, I didn't check as I was looking for the two new foals. 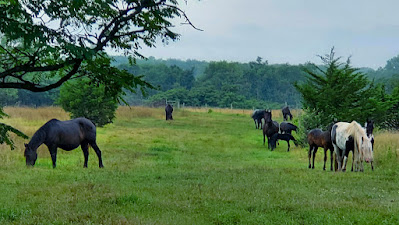 Jury was keeping her colt away from the rest. 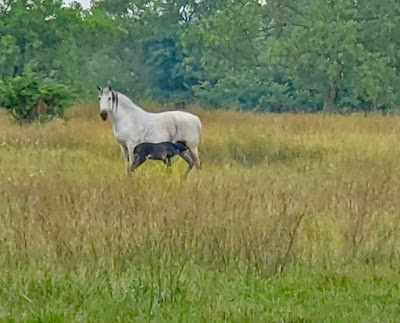 Indy's new colt is standing next to Indy just behind the other 2 foals and Irish. 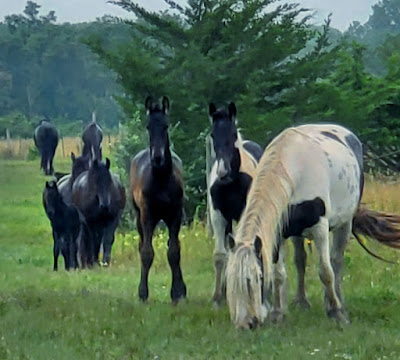 I haltered Indy and gave the lead rope to Taegan and Kensley then went to halter Jury but stopped to take a few pictures of the girls petting the horses. 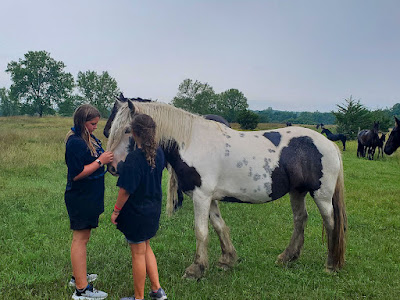 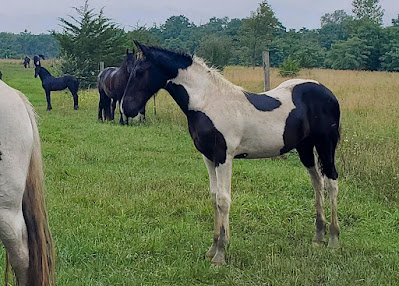 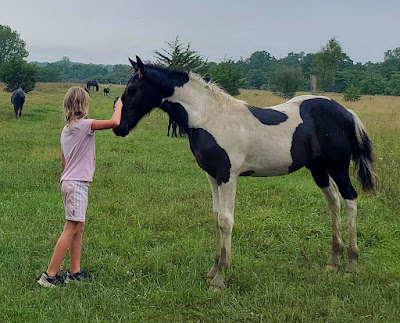 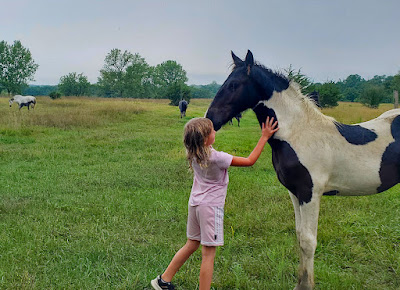 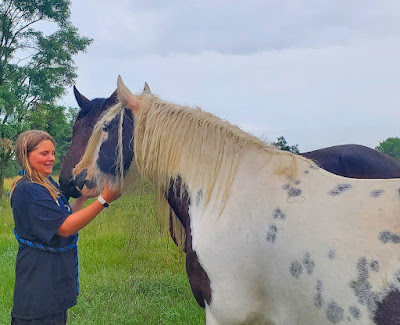 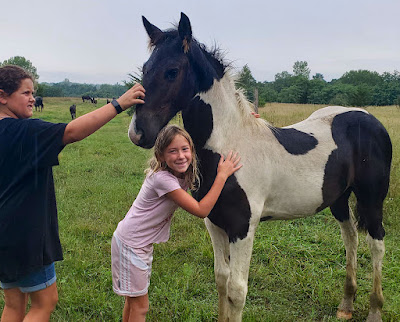 Jury's colt was breathing heavy, enough so that I very slowly and carefully led Jury down the hill giving the colt plenty of time to follow. It was hot and humid so that may be the problem OR it could be his lungs aren't quite developed enough. He is 3 weeks early. We decide since he wasn't feeling well I would only take him and Jury and leave Indy and her colt which is thriving out there. He was galloping around just fine. We stopped at Bs on the way home for ice cream cones as we were really hot. Bs have the best soft serve ice cream. Jury and her colt were put in the stall and the air conditioner turned on and then I watched on the monitor while laundry was done.  I made dinner and took it over to mom's for the 5 o'clock shift only to find Diane was on for that shift. I was glad to head back home to finish the laundry. This evening I headed up at 8:00 pm to feed the orphan colt then put Jury and her colt outside. It had cooled down nicely. The sun was starting to set and was lighting up the tops of the trees making the glow orange. 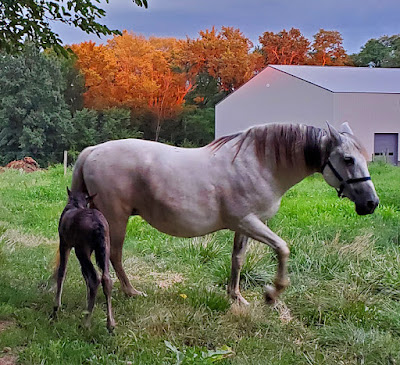 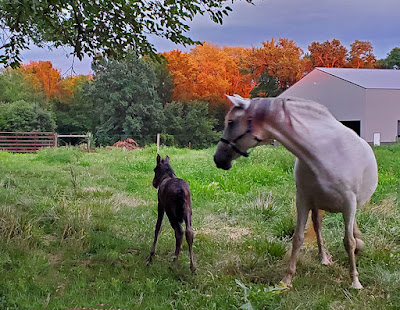 The colt seems to be breathing a little better. Their stall was cleaned and made ready for tomorrow. The sky was turning from gold to red to purple so I walked out to the field to take some sunset pictures for that airbnb ad. 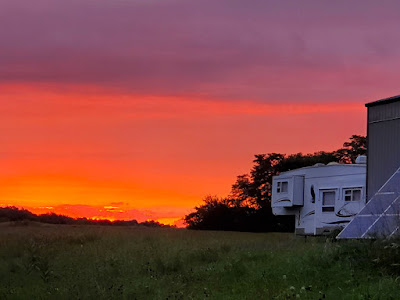 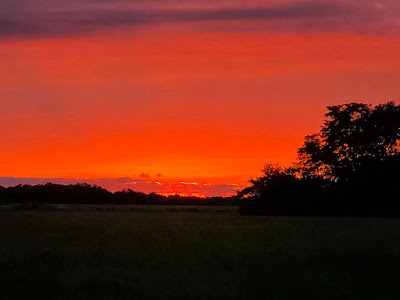 The last picture was taken as the intense orange and gold started softening to pink and purple. 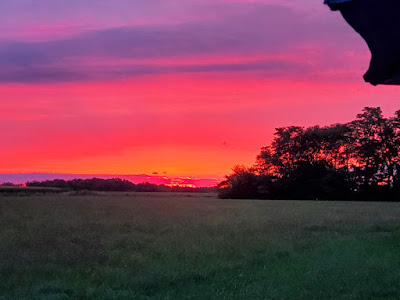 Each time I marvel at the beauty I remember singing with my dad the Sunset Song.
Posted by Judy Sceggel at 9:34 PM