Mark fed Evan a square bale this morning as I left at 8:00 am to head to Chilicothe to pick up Iris from David and Stephanie's house.  From there I picked up Sarah and baby River and the next stop was Goodfield to pick up Taunya and Addyson. All 6 of us were crammed into the 2007 Prius and that included 2 car seats.  We made it to Rhoda and Lee's about 20 minutes later.  Iris was pretty excited to meet her new baby brother Zeke. 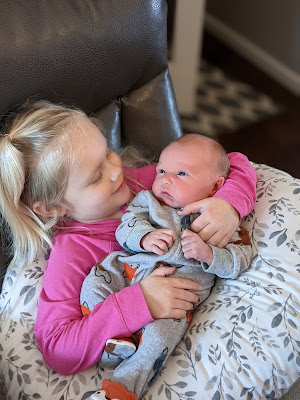 We all took turns holding him. 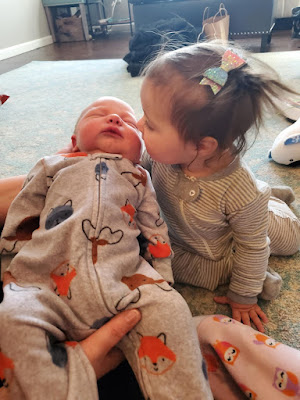 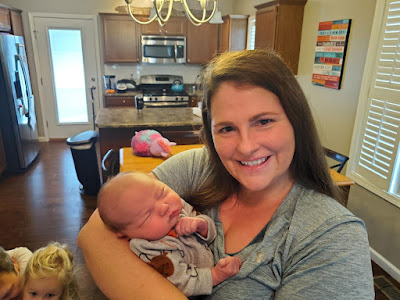 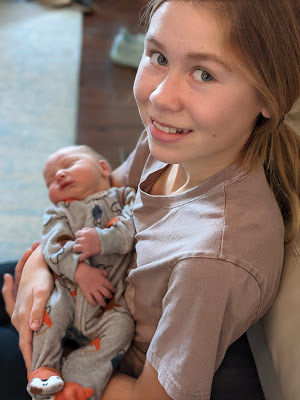 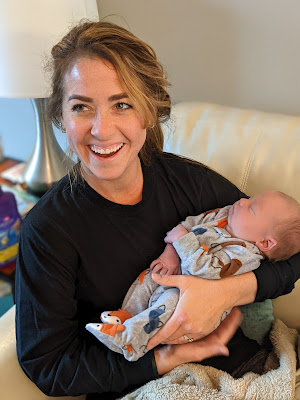 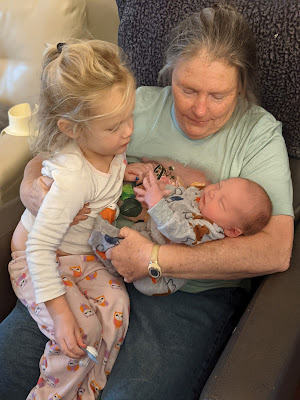 John and Beth sent a gift for Zeke, Iris got to open it and show it off. 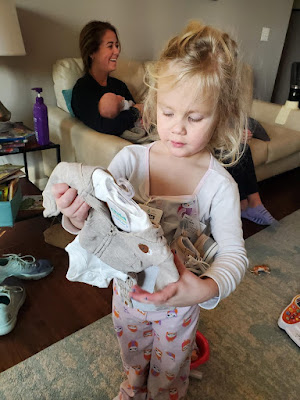 A tiny little boy outfit with socks and shoes. 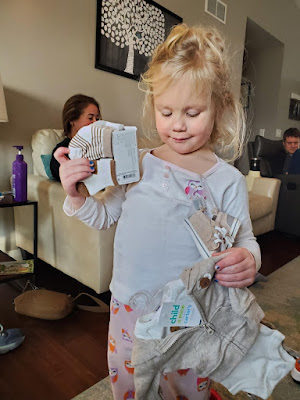 If you would like to see the rest of the pictures click HERE.
Baby River had fun playing with Iris' teddy bear.
It was hard to leave such a sweet baby. We stopped for a quick bite to eat then dropped Taunya and Addyson off before heading to Sarah and Nolan's to drop River and Sarah off.  I stopped at Dollar Tree to pick up a few crafts for Sunday evening then stopped at Phil and Anna's to pick up the girls.  Mark helped move a round bale in for Evan. The sun was so bright that when I took the picture below I wasn't sure if the new bale or Evan was in the frame. 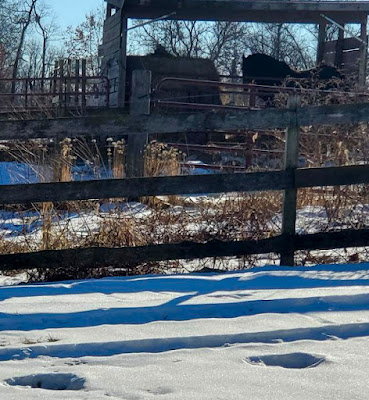 As soon as Anna came we left to pick up the camper. That didn't go as planned. We could not get the plug to work and were not able to get the camper raised up enough to fit under our truck. The seller was called, he came out and it worked on his truck but not ours. He ended up taking pity on us and told us he would deliver it tomorrow afternoon. Mark was SO relieved, as was I.  By this time it was past supper time so stopped at Avanti's and picked up food for everyone at mom's.  We were 20 minutes late with supper. Mom didn't have much of an appetite, she only took a couple bites then wanted ice cream. There was no ice cream at mom's house. Karin offered to buy some tomorrow but mom really wanted some tonight. Thankfully I had some in my freezer and drove over to get it. Joan is spending the night tonight with mom. We talked about church tomorrow and mom decide if she has a good night tonight she would like to go. At least for one service. We got word that Aunt Jinnie will not be able to come Tuesday. She has to schedule a root canal.  We almost got everyone needing done today done.
Posted by Judy Sceggel at 9:31 PM