Aunt Jinnie got a phone call at 7:30 this morning from the Hanna City post office, her thread had finally been delivered. She was asked if she wanted it to go out on the truck or did she want to drive in to get it.  Karin was sent to get it.  That thread has been in transit trying to make it here for over 2 weeks. The company finally sent another batch of thread (which hasn't arrived yet either) We had a good walk this morning. Joan stopped in and took a look at the repair needed in the barn and agreed with what Mark wanted to do yesterday. We just have to figure out how.  The wheel chair van was taken to the Berean office this morning with mom and Aunt Jinnie and thankfully it worked perfectly. IF you would like to read about our morning there click HERE. We left there just after 11:00 am. I had to stop at the trailer repair place to get the key out of the trailer and give it to Kim in the office. From there we drove to the Hanna City post office to drop off the two boxes of Bibles, all of Aunt Jinnie's Christmas cards and a return package I had to send back. We finished lunch by 12:45 pm and Joan showed up a little early to relieve me. That gave me time to finish cleaning a stall and prepare Evan's shelter for a new bale. When Mark got home he helped move the bale in.

We finished everything by 4:00 pm. That gave me plenty of time to get supper cooked for the dinner at mom's tonight. We had bbq ribs, steamed broccoli in a cheese sauce, egg rolls with a sweet and sour sauce and for dessert a light chocolate pudding swirl. The rain moved in right after dinner. 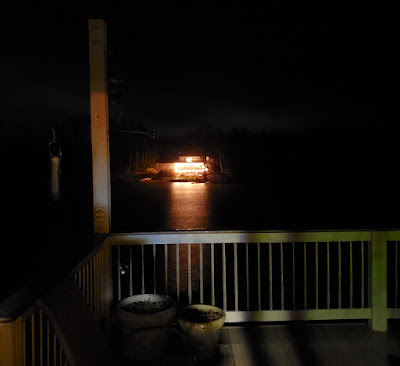 I love the sound of rain so took a short video.
Mom wanted a hot tub tonight and Karin was more than willing to give her one. Since Karin can handle that herself and I can't she gave me the evening off. I had just walked in the door when Braelyn showed up. She was up cleaning the apartment and had just finished. Since I had Mark's car and it was warmed up I took her home but Anna passed us. She was coming to pick Braelyn up. We have hunters coming in tomorrow leaving on Thursday then 3 more hunters coming in on Thursday leaving Sunday. Evidently we have some good hunting around here.
Posted by Judy Sceggel at 7:18 PM