Another wet cold day. I left the house at 5:30 am to bring in Tatiana before the rain started up and was pleased to see she is finally starting to wax. 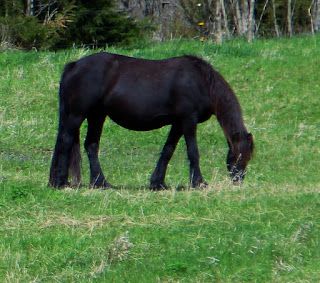 She would have preferred to stay out in the field raining or not. She really isn't due until May 16th but has always gone early, as much as 3 weeks early. This time it looks like it will be about 10 days early.  She is not happy in the indoor.  A request came in from Ohio, they are giving out Bibles to prisoners and needed Bible studies. That meant another drive in to the Berean office. An entire box of 1-4's were boxed, wrapped and taken to the post office for mailing.  We only have 1 box left so one of our jobs next Tuesday will be to work on folding 1-4s for stuffing in Bibles. I stopped at Sam's club before heading home for more cat food. It was pouring down rain when I made it home so left the cat food in the car for later. I got pretty wet and the house was cold so brought in wood and got the wood burner going again.  Hopefully THIS is the last time for a fire until November. Who would have thought we would need a fire in May. 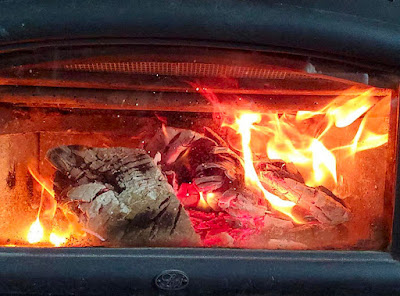 Joan was getting the 2011 Keystone trailer ready for the renter picking it up today when she noticed the extra extension cord was missing.  The extension cords were left in the indoor and pretty dusty. I drove them over and was cleaning them up when Beth called, she was at mom's and needed a little bit of help. When I got home Mark was here.  He wanted supper early and after supper went out to clean up his car for our trip to Wheaton College tomorrow.  It is hard to believe but 50 years ago he graduated from there before heading to North Western for his graduate program. We have someone wanting to come look at Rocky. He is scheduled to be gelded May 12th so I told them to wait until after he is done with that. They happen to want a gelding so this works out well.  I also got the fried chicken ordered for Sunday.  Kroger is going to fry it but are going to close on Sunday at 3:00 pm so we have to pick up the 96 pieces at 2:45 pm Sunday afternoon and keep it warm until 4:30 pm. It should come in two boxes so we can put one in my oven and one in the apartment oven.  This evening I spent some time out in the barn with Tatiana grooming her and encouraging her to settle down.  Hopefully she will hold off delivering until we get home tomorrow evening, either that or deliver tonight before we leave tomorrow.  It is still raining but has been a nice soft soaking rain all day.  We got word today that Olivia, Jewel's very first Evan daughter delivered a colt this morning. Julie, Olivia's owner sent the picture below stating Evan became a grandfather: 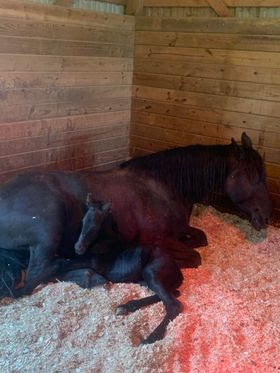 The other news was Skye was confirmed in foal.
Posted by Judy Sceggel at 8:34 PM