What a day.  I was so relieved at 4:00 am believing Soul was going to make it, then shocked at 5:30 am to find she was not better.  Mike came over with the excavator to dig her grave. 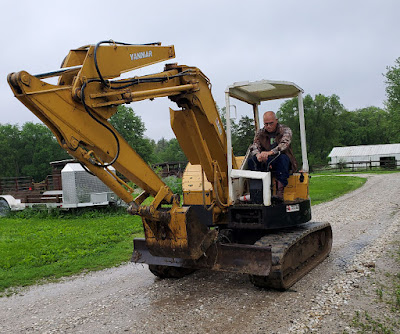 We put her grave by the woods in the field where she loved to run. Below is a video of Mike digging the grave then covering it back up.
Diane was here to help bring him into a stall. I brought in Irish, blindfolded her and tried to get him to nurse but he wouldn't. He just wanted his mama.  He was given hay, grain and water then I went into the house to start making phone calls.  EarlyBird Feed in Goodfield carries the Mare milk replacer but they only had 3 bags and all 3 bags were to be picked up this morning by a buyer.  The man at Earlybird called the buyer and left a message asking if she would allow me to buy one.  Thankfully she did.  I borrowed Diane's car to drive to Goodfield to pick up the 40 pound bag. The cost was $144.00 plus tax. When I arrived home I made up a quart but could not get him to taste it.  I kept working on that most of the day and by 4:30 pm he drank down the quart.  Right after that a man came to check out the golf cart I have for sale.  They are going to come tomorrow to buy it.  Tonight we hosted rotating potluck and had a delicious dinner but the fellowship was even better than the food. 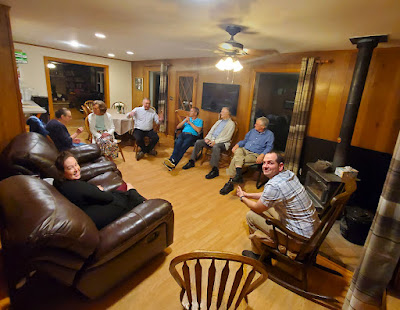 One funny thing happened. Amy called and I quick declined the call then sent a text, "I can't talk right now  She immediately called back and again I declined the call and sent another text "I can't talk right now at potluck." The 3rd time she called again I declined and this time sent the text, "I can't talk right now am hosting potluck." I finally looked down and realized I had been declining Amy's calls but sending those texts to the man who wants to pick up the golf cart tomorrow after he sent back the text, "no worries"  That man must think this lady is crazy.  I ran up to the barn around 9:00 pm to take 2 quarts of milk replacer up to the colt and he drank a little. The rest was left for him. It is good for 12 hours so can be left overnight. Now I'm heading to bed.
Posted by Judy Sceggel at 10:34 PM