I checked on the colt the first thing this morning and was pleased the milk I gave him last night was gone.  He was given 2 quarts at 6:00 am. I needed to be at mom's at 7:30 am and still needed to put a halter on Rocky as we had someone coming to look at him at 10:00 am.  Ruth arrived at 10:00 am to stay at mom's while I showed Rocky but the people coming had not yet arrived which gave me time to make another 2 quarts of milk mixture up and take it to Rocky. This time the 2 quarts were gone in 4 hours.  When I got back to the cabin the prospective buyers had arrived. Rocky was taken out and gone over. 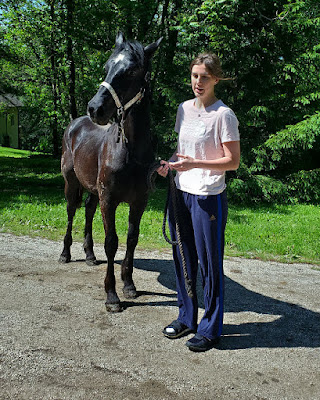 She wanted to see him move so we walked him over to the outdoor arena where he put on a good show, cantering and doing his big trot both directions.  He was put in the far paddock as I will be introducing him to Soul's colt who needs a companion. We walked over to see Rocky's sire Valiant, Valiant was taken out and asked to lay down. He remembered his training.  By this time it was close to 11:00 and the man coming to pick up the golf cart arrived.  We said goodby then I hiked back up to the barn to help get the golf cart in his horse trailer. The ramp he brought was pretty old and broke under the weight of the cart so we used the skid steer to put it in.  By the time I got over to mom's it was after 11:00 am.  Sarah arrived with her 3 girls. They were playing on the playground then came inside to greet great grandma then out to the deck.
We watched humming birds come to drink the grape jelly we put out for the Baltimore Oriels.
River was having so much fun playing with the blossoms that had dropped off the trees onto the deck.
Ruth arrived around 2:30 pm so I went right back up to the stall and sure enough the colt was needing more milk.  He was given 3 quarts this time and checked at 5:30pm. He was almost out so given another 3 quarts before we left for Middle Grove. We stopped at the Warehouse to pick up a tenderloin to split on the way out.  There were a lot of campers at Middle Grove today.  Lots of second cousins all came to play. 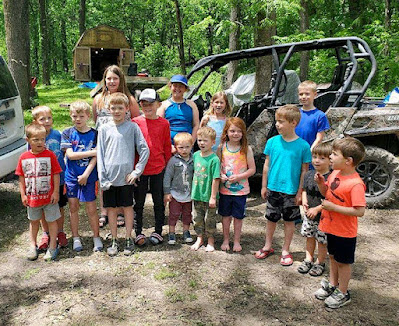 All those kids are related. Some are Spark's grand children, some are John's grandchildren and some are my grandchildren.  Diane took the picture above. When we arrived Spark and Rhonda were just leaving and the rest were finishing up supper. After supper Mike took us on a jeep ride over to see the horses.
Mike took fly spray out so when we reached them the horses got fly sprayed. 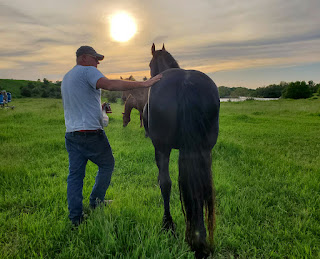 If you would like to see the rest of the pictures from the jeep ride click HERE. Mark and I left just after 8:00 pm for home and drove straight up to the barn. The colt's buckets were brought down to the house and given a good scrubbing then a gallon of milk was mixed up and taken to his stall for the night.  It is now almost 11:00 pm and Mark has been in bed for 40 minutes. Time for me to head there too.
Posted by Judy Sceggel at 10:47 PM