Joan ended up with unexpected company last night. Bill and Bethany left for home got to Carlock when their alternator went out.  They just had the car towed back to Joan's house. This morning Bill was hard at work fixing it and did.  Nice to have such a handy son-in-law. Joan was thrilled they stayed an extra night. Always fun to have grandchildren stay a day longer than planned. 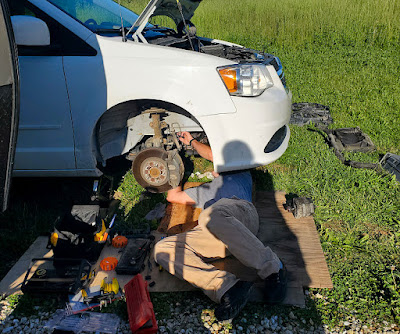 Right after the walk, actually at 8:00 am I left for Middle Grove with the truck and trailer to bring Rosaleigh home. The horses were not in sight but the ground was dry enough that I could drive all the way back.  Still no horses so I was on my way back to the gate when I saw ONE chestnut horse all by himself.  Mika was grazing with no other horses anywhere near.  I zoomed the camera in as far as possible searching but it really was only him. 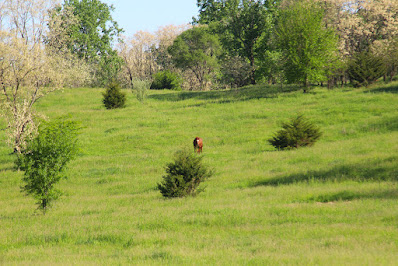 I left the truck and trailer and started the long hike to him. He stood there until I arrived. 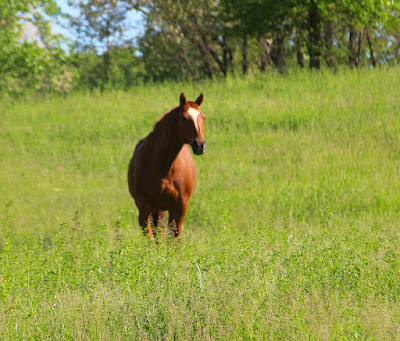 He seemed fine but I was pretty sure that meant Rosaleigh had delivered and the mares were keeping him away. I was right. I walked past him, he turned looked around, called then took off cantering up the hill. 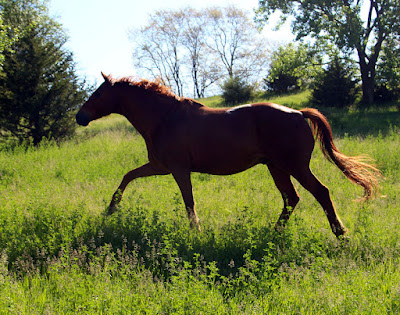 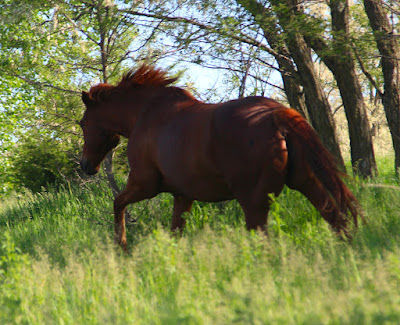 He cantered for about 5 minutes heading North then slid to a stop and just stared. 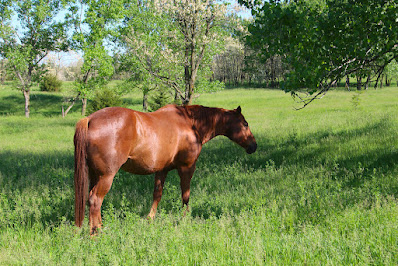 In that far clump of trees were a herd of black horses with their faces turned out toward Mika. Finally Jewel broke from the bunch and came down to see who was with Mika. 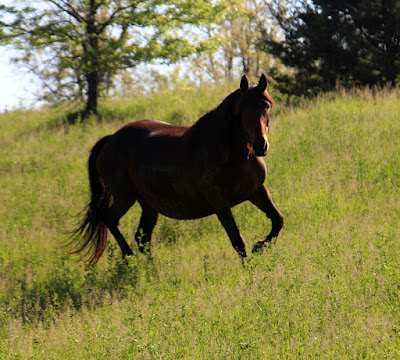 She recognized me, trotted back and somehow communicated with the rest it was just the human lady that feeds them.  At that point the group broke up a bit with each mare settling down to graze. That is 2 year old Dancer far right in the picture below (also not allowed to be with the new baby). The others are all surrounding Rosaleigh. 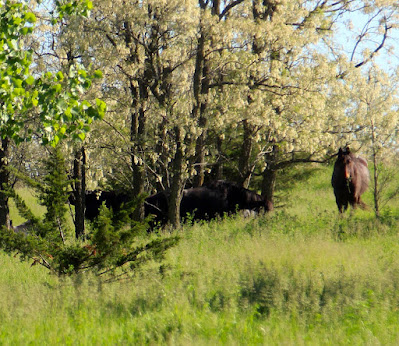 Jewel joined Mika and Dancer started to follow them. Dancer is very muddy, she has found somewhere good to roll to keep off the flies. 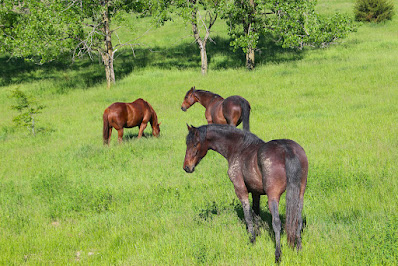 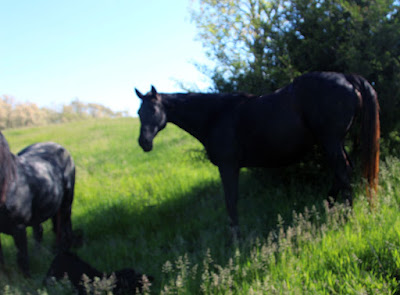 Oksana and Indy are in front of Rosaleigh. That is Indy behind Oksana.  Rosaleigh's new foal was still laying down. 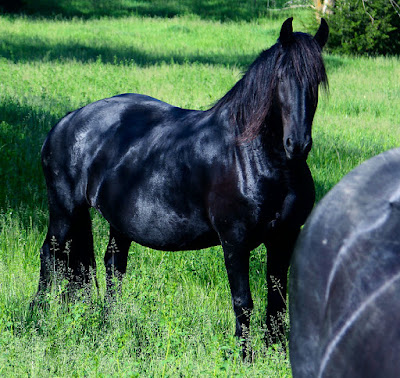 When I arrived the foal had not yet stood. Her hooves were still sporting her foal slippers. 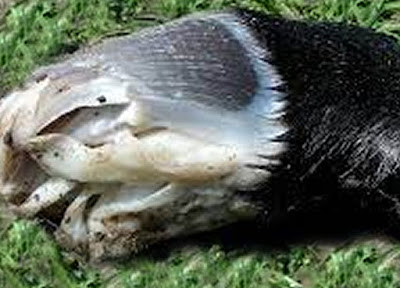 It was a beautiful morning and I didn't want to try to carry the filly all the way back to the trailer. It was probably at least a half a mile away or more. I just waited and watched as she made it to her feet then started her search for the udder. 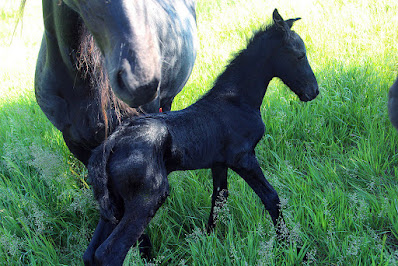 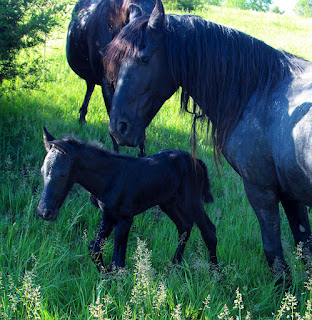 It is thrilling when the foal first suckles.  One feels like yelling "YES!" 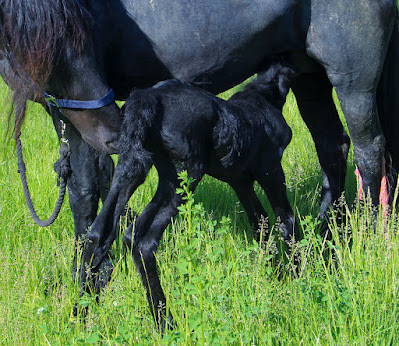 After getting her tummy full we started down the hill but went very slowly taking an hour to reach the trailer. I had to chase Dancer off a couple of times and when we got out of sight of the herd Rosaleigh kept trying to go back.  She was loose and I was using the lead rope to help guide the filly so as soon as she realized the filly wasn't following she would come back and join us.  We took lots of stops for nursing and naps.  When we finally reached the trailer I lifted the filly inside and Rosaleigh followed. 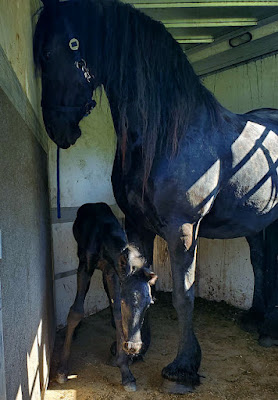 Then started the long drive home reaching home just before noon. That poor filly was exhausted by the time they were unloaded and put in the stall. Both of them laid down to take a nap. 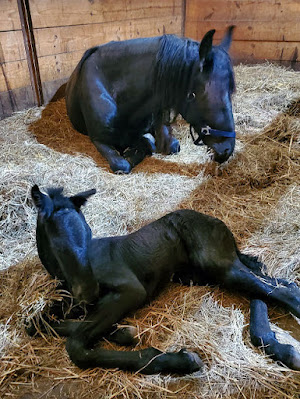 After a nap the filly was standing and nursing well. 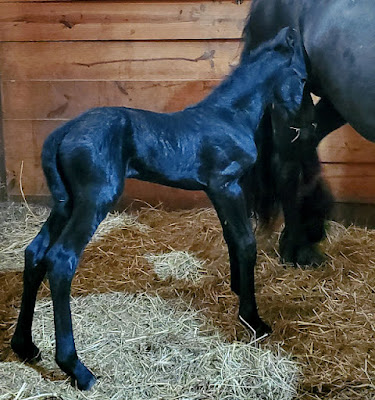 I took a short video of her nursing, she even tried to do a little trot.
I left then and drove down to the Peoria Post office to pick up the Berean mail then ran straight up to the barn to check on them. With everything that happened Rosaleigh's placenta had not yet delivered. At 1:00 pm she was given 1 cc of Oxytosin.  That was finally delivered about 2:30 pm and buried. Thankful it was complete. Irish was teased and covered by Valiant when she showed.  The apartment booked for tonight but I was having trouble with water pressure and thought I may need to cancel them.  Mark made it home in time to fix the regulator so that was good.  A text came in from the owner of Bella. Bella was bred last year to Valiant and this morning produced a beautiful silver filly. This filly will end up blue black once full grown. I had to ask for pictures. 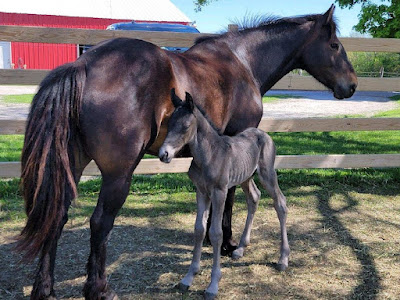 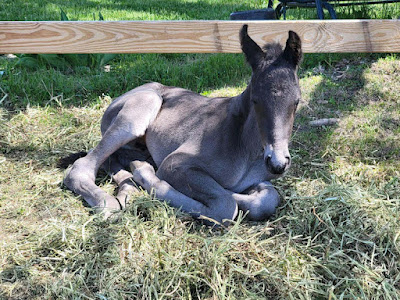 So both Evan and Valiant became a father again today.  I needed to run to the bank in Hanna City but stopped at Diane's office to see if the check for Soul's colt arrived. She wasn't there but Faith and Ellie were, they were busy painting the new fence. 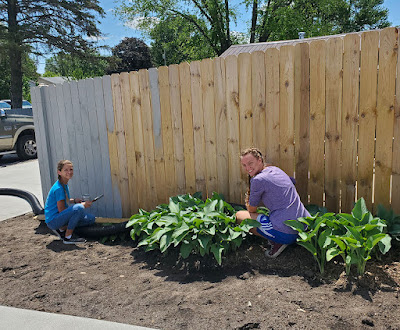 I made the comment, "you would rather paint than mow?" and they both said, "that will be done next."  Sure enough this evening the mowing started. 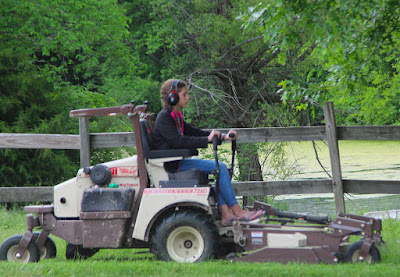 Faith is an expert mower. She kept that machine moving today and got all of our mowing done along with mom's and Joan's.  Check out how fast she mows.
Mark didn't want left overs tonight as he had those for lunch so he got fish while I heated up left overs for me.  I spent the evening at mom's. Diane was out digging up plants to take over to her house so she came in, Rachel and Karin were there with mom so we ended up playing a couple games while there.  Lots of fun at mom's tonight. Mark was pleased when Weaton posted on their website pictures of the 50th reunion and included US. 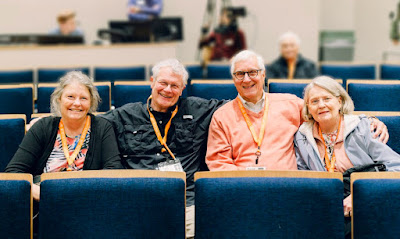 He mentioned: Dave and I discovered we were chemistry major veterans. Mark was so thankful that the Lord's traveling mercies provided some easier mountains to climb other than chemistry.