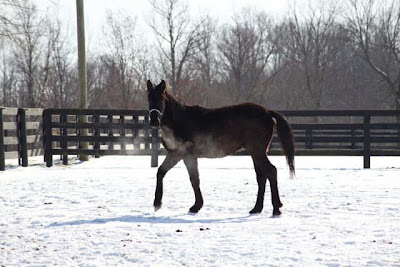 Aragon's new owner sent these pictures today of him at his new home with his new playmates. Nice to see him with buddies. 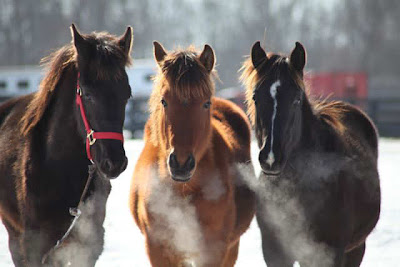 On a different note when Dr. Hoerr came out to draw blood for the coggins, he RAVED about Caden. Caden is almost a yearling and is not going to be more than 15.2 hands tall as Paris is his dam but the way he holds his head, his LONG neck, and the way he holds his tail, Dr. Hoerr couldn't fault him and went on and on about what a nice colt he is. While we were waiting for Dr. Hoerr, We had Caden in the same stall with Indy and Ayanna and he continued to pester them until he was finally tied up and they were left free. What is it with colts?
We had a long day at church, it was the yearly business meeting after a short service in the morning, then in the afternoon another short service then voting on trustees and Sunday School teachers. We made it home around 2:15pm and left at 2:50pm for dinner at Logan's with David, Stephanie, Sarah, Rhoda, Ben, Taunya and Addyson. Had to eat early, Rhoda's team is playing at 4:00pm. After dinner Ben & Taunya and David & Steph drove down to Riverplex to watch some of the game. We headed home, there is hymnsing tonight and we want to relax by the fire for an hour before heading back out.
Posted by Judy Sceggel at 2:34 PM