We knew it was cold, the furnace seemed to turn on quite frequently during the night. The dogs came running down to be let out, the door was opened and both stopped dead in their tracks. The encouragement for them to HURRY out so the door could be shut was quite dramatic. It was MOVE, MOVE, go! Within seconds Emma wanted back in but it took Darcy a couple of minutes to be back at the door. One really needs to bundle up if any amount of time is going to be spent outside. As tempting as it is to skip the walk, the horses need to be checked on so it will be off to the farm by 7:00am.
The car thermometer is reading 2 degrees and the nearer the farm it kept dropping until it bottomed out at 4 BELOW zero are we nuts walking? maybe! The babies were glad to see a car drive up. They all came running to their buckets covered in frost. 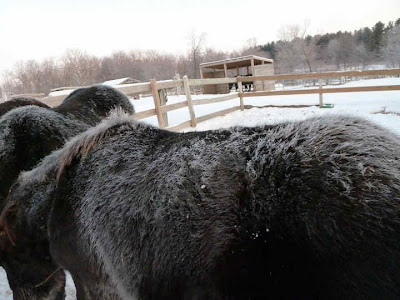 All of the horses were covered, they are so well insulated the frost won't melt off until the sun hits it with enough warmth. Coming around the cabin drive is such a pretty picture with the sun just starting to break through and the trees in the back ground covered in hoar frost. 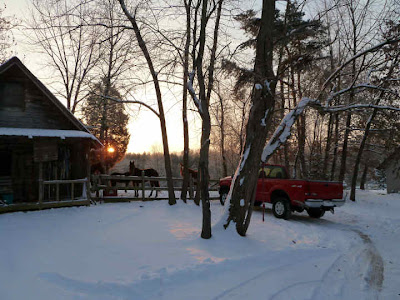 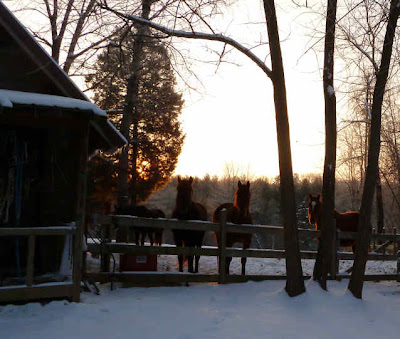 Once the walk was finished as I was getting into the car I happened to look in the rearview mirror and saw my hair covered in hoar frost. This is NOT gray hair although there is a lot of gray mixed in with the frost. 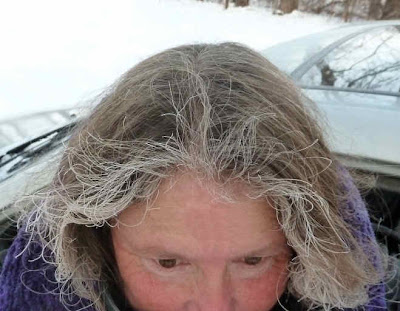