There was much to do this morning before the rain moved in. As soon as the walk was over I took off for Pekin, IL to shop at Stock and Field for 600 pounds of grain. There was no way to park close to the breeding shed for unloading that grain, so all 12 of those 50 pound bags had to be carried from the car to the shed one by one in the slippery mud then dumped into the waiting garbage cans.  That was accomplished by 10:15 am and after changing from a skirt (because of shopping in public) and into my work pants and boots I left for Middle Grove to check Indy and Oksana. Just before Middle Grove road I saw a big bald eagle sitting in a field eating on something. There was a truck behind me so I couldn't stop to see what had died and of course my imagination starts questioning if there are any unsolved missing persons. Probably just a dead deer.  I drove to the second gate first as that is where the hay bales are but when I arrived there were no horses in sight. Mike had put 6 bales out for the herd on Friday and the bales were barely eaten on. 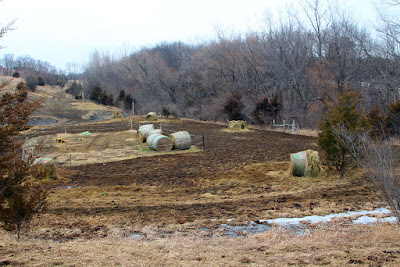 I hiked to the top of the hill to search and saw them at the far end. Below the camera is zoomed in as far as possible, you can see the herd scattered way over to the north end of the property. 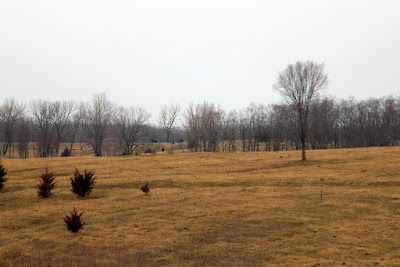 I hiked back down to the car and drove to the first gate, parked and started walking up that hill.
The herd was all spread out either grazing or laying down napping. 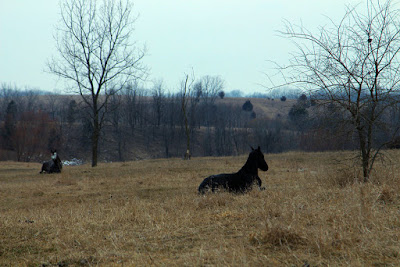 Galena was the first to greet me followed by Tori. 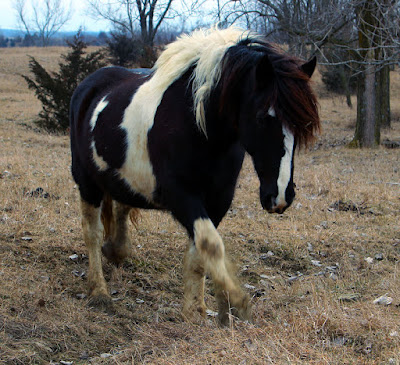 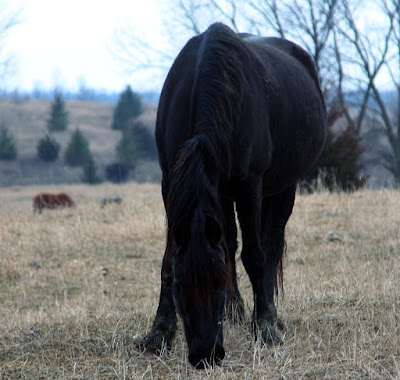 I was looking for Indy as she is the mare due soon.  She was grazing near Lola and Mika. 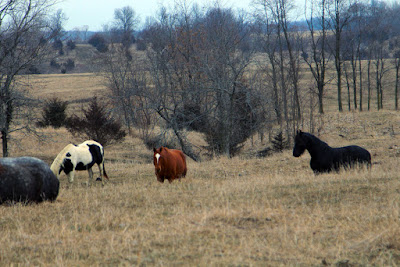 Her udder is starting to fill. I'll have to come back on Thursday to check her and if it is bigger will need to bring her home. 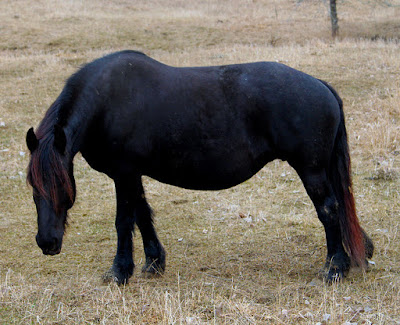 Oksana's udder was still flat, no sign of filling. That is Oksana to the right in the picture below. The other two horses are Irish the Gypsy mare and Isla the Warlander. 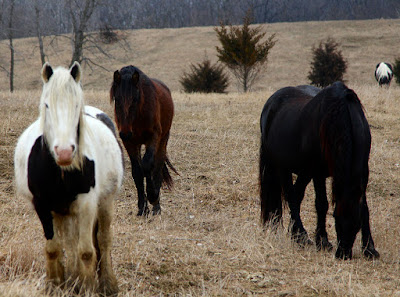 It started sprinkling while checking the mares. All those little white dots on Rosaleigh are rain drops. Her belly was bigger this week than last so I think she must be pregnant. 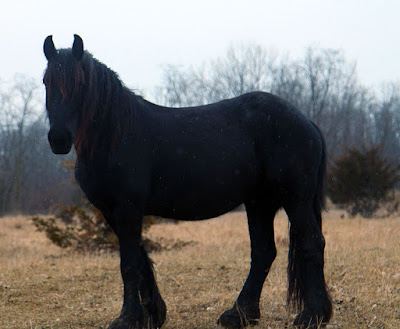 I took quiet a few pictures of the horses, if you would like to see them click HERE. While walking around checking the horses a huge flock of geese flew right over probably heading to the Giant Goose Ranch. 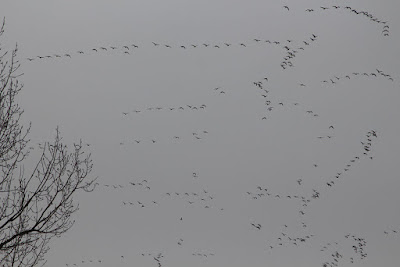 I came upon some big old dried up white bones on the way back down to the car. They were much to big to be human. 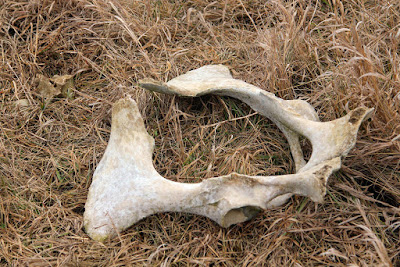 The rain started coming down much harder and rained all day. The weather report is not good, snow is moving in tomorrow afternoon and by the time it stops on Wednesday we are to have 4 to 6 inches. That will be 3 Wednesday's in a row with snow.  Thankful that Mark left the snow plow on the tractor. Mom's carpal tunnel surgery is scheduled for tomorrow morning. We didn't get much Berean mail so Berean was called off tomorrow leaving me free to drive mom to her surgery. We will need to leave at 6:30 am tomorrow for St Francis. Since there was no Berean meal to make, instead of making chicken stir fry, the two chickens were de-boned, the meat frozen, the carcasses boiled and a big pot of soup made for our supper.