On the walk today Emma found this treasture: 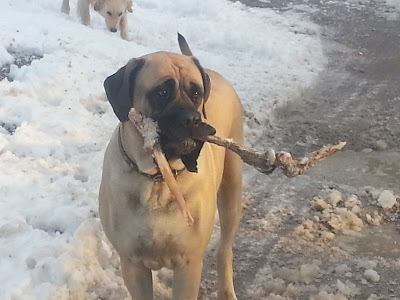 See why she loves going on these walks. This was a deer bone Heidi actually buried on the beach. Darcy dug it up then Emma claimed it.
Dr. Hoerr had an emergency and didn't arrive until after 10:00am but that worked out well, Rhoda was able to come help with the ultrasounds. First up was Killian. He needed his wolf teeth pulled, the sharp edges floated off his teeth and his coggins drawn. 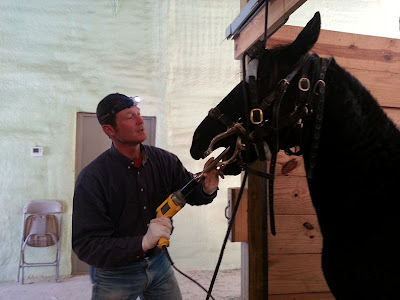 Killian has now dropped and is becoming a stallion instead of just a boy. Although the mares still boss him around. Jenis was next, we wanted to see if she is cycling, it seemed she came in season 20 days ago but only for 1 day. Nope her uterus is still transitional, meaning not ready to start a true cycle. Dr. Hoerr feels she is at least a month away. Bunni and Sally were next. Both were bred last October Bunni to Valiant and Sally to Evan, both settled. Both are due mid September. Sissy bred to Valiant and Star bred to Evan were next and both of them also settled. Sissy is due Jan 13th, 2014 and Star is due Jan 30th, 2014. If all goes well we will end up with some very early foals. Before Dr. Hoerr left he gave Darcy and Emma their shots. Both dogs were due for a 3 year rabies shot plus their yearly dog shots. Steven arrived shortly after Dr. Hoerr left and helped get Lily covered by Valiant and Ayanna covered by Evan. He hooked up the stock trailer and we hauled Sissy and Star out to Middle Grove. We had to hike in quite a ways to find the horses and even then only found 8 of them. I'm sure the rest weren't far away but it was just too wet and muddy to want to hike to find them. Killian will be leaving for Emily's when his coggins comes back and I wanted him to learn to lay down before going. I asked Steven to help with this. It took probably 10-15  minutes the first time Steven asked but only a couple of minutes the second time. He was praised and given a treat to encourage him to stay quietly down until asked to get up. This is something much easier to teach when the horse is young, flexible, and small. Not that Killian is small, he is going to be huge. 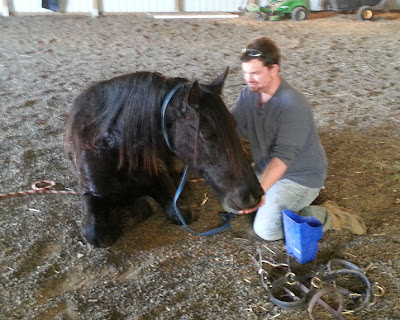 Karin had him bowing pretty much on command but I wasn't sure about the next step. He did so well Steven  will ask him again on Saturday when he comes back to help cover the 2 mares in season.
Ella seems about the same. She was left out all day today and just now brought in to the stall.
Each evening Mark sits down by the chair and Emma climbs on his lap. Today I just had to take a picture of the big lap dogs and Mark surround by them. 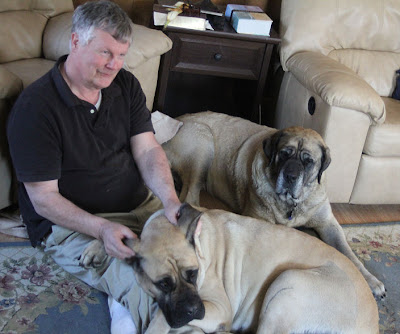 Beth Meister relieved me this morning and Ruth relieved Beth this afternoon. She will spend the night with mom. Sure hope mom has a better night and gets some healing rest.
Posted by Judy Sceggel at 8:40 PM