This is Sunday's post, yesterday was too busy and lasted too late into the night to blog. We awoke to the stallions neighing and making a fuss. Sure enough Sangria was out wandering around. All the other mares were where they belonged so it was my job to find the fence down. Believing the electric fence must be down the charger was turned off. But after checking the entire line all was well. Sangria broke through a different fence to get to Valiant. She is so heavily in season she found a way over out. While out the horses were fed then in to the house to cook breakfast for us. Since I was not going to church, a deluxe breakfast was cooked, making a big vegetable omelet. Mark left for church but I listened online as there is no way to get to the Old School Center by noon from church for the second day of the Spoon River Drive. Peoria had a visiting minister, Bill Schick. Always good to hear him speak. He spoke in the morning and Craig Stickling spoke in the afternoon.
The traffic was as bad as expected. Dan got caught in it behind me so when I arrived the saddles were still locked up. As soon as the truck and trailer were parked at people came asking, "when are the pony rides starting?"
We had a very busy afternoon. 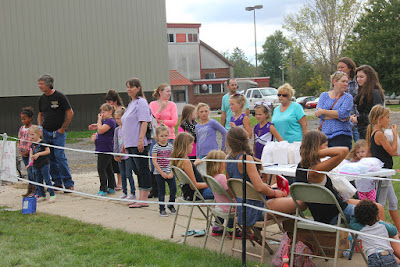 Our most unusual customer was a lady that wanted to give her 2 dogs a ride. 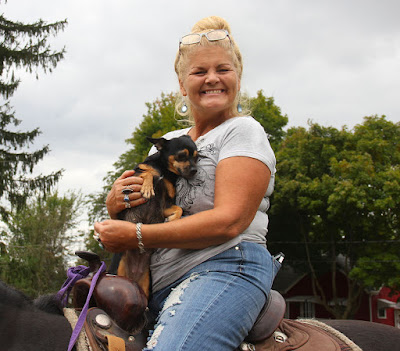 Of course lots of popcorn and cotton candy was made and some even sold and the rest our hard working volunteer vaulters helped dispose. To see the rest of the pony ride pictures click HERE.
Thankfully Karin picked up a couple of chicken dinners on the way home from Gils for dinner. The volley ball players were assembling by the time we got home and ate.
Sangria was covered and the mares fed before I headed over. It was a mad house over there, we thought there must have been over a hundred kids and grandkids playing. (may be a slight exaggeration)
Rhoda and Lee came bringing a couple new saddles and saddle pads she found. Both of the saddles are in new condition both Big Horns and we are thrilled. 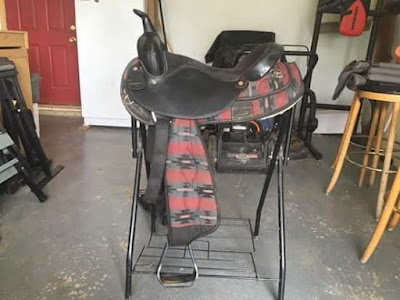 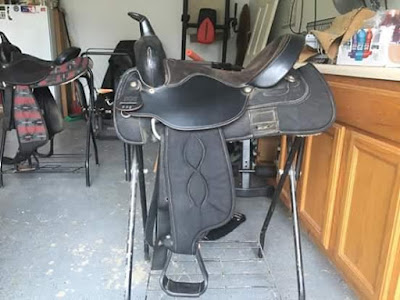