Diane told us about John Honegger's last couple days on the walk today. Below is one of the last pictures taken of John out here during the Sunday evening volley ball games going on golf cart rides with a 3 of his great granddaughters. 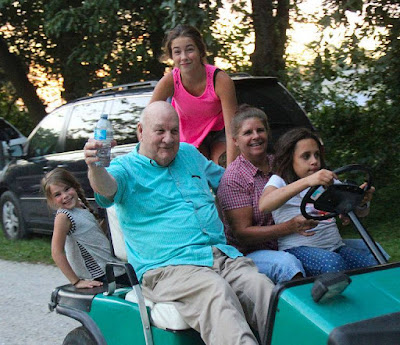 John Honegger, 81, of Peoria, Illinois, passed away peacefully Sunday, October 30, 2016 at OSF St. Francis Medical Center in Peoria, after a brief illness. He was surrounded by his loving family.
He was born on July 15, 1935 in Forrest, Illinois, the 13th child of Walter and Elizabeth (Moser) Honegger. He married his high school sweetheart Wilma Maurer on August 14, 1954. He was a devoted husband to his loving wife for 62 years, including the last 8 years that she has been residing in the Salem Wing of the Skylines Home.
Also surviving are his three children, Jill (Bob) Gangloff, Michael (Diane) Honegger and Gina (Gary) Kempf. His family also includes nine grandchildren; Jenny (Billy) Schick, Luke (Amanda) Gangloff, Andrew (Rachel) Honegger, Adam (Kimberly) Gangloff, Tyler (Erika) Kempf, Ryan (Keighley) Kempf, Paige (Chase) Reatherford, Dane Kempf, Shannon Kempf (Caleb Brachbill, fiancé) and nine great-grandchildren, Willow, Ella, Tate, Camden, Irelyn, Cole, Crew, Abigail and Lennox.
He is also survived by one sister, Donna Leman and numerous nieces and nephews who were special to him.
John worked in sales his entire life including Fruehauf Trailer and Jim Hawk Truck Trailers before retiring. He enjoyed fishing, playing bridge, mentoring grandchildren and visiting with the residents and staff at the Apostolic Christian Skylines Home.
His faith in God was his foundation. He was a member of the Peoria Apostolic Christian Church and served in numerous capacities including Sunday School Superintendent and Church Trustee.
Funeral services will be at his church at 10:00 am Thursday, November 3, 2016. The church ministers will officiate. Visitation will be from 4 until 7pm Wednesday at the Davison Fulton Woolsey Wilton Funeral Home in Peoria and from 9 until 9:45am Thursday at church. Burial will be in the Apostolic Christian Church Cemetery, near Edwards, Illinois.
In lieu of flowers, memorials may be made to Apostolic Christian Skylines.
Posted by Judy Sceggel at 8:51 PM