Ribbon was due to be at Hoerr Vet clinic in Morton, IL at noon today. That meant the truck had to be hooked back up to the stock trailer, and the horses needing to go back to Middle Grove would have to be taken back in the morning. I was on the way with 4 horses by 9:15 am and that was after our walk, after the feeding, hooking up the trailer, bringing Mika, Bunni, Sally and Missy over from the cabin field and loading them up. I had to take 2 trips to the cabin as there wasn't anyone around to help this morning. The halters had all been taken off of them on Sunday and it took a few minutes to scrounge around for 4 halters that would fit these horse finding 2 on the cabin porch and 2 more in the truck. How can we possibly lose hundreds of halters. That really isn't an exaggeration, these are cheap halters that will easily break if a horse gets caught on them so that may be one of the reasons we lose so many. Anyway those 4 horses were thrilled to get back to Middle Grove. Mika was the first out of the trailer. 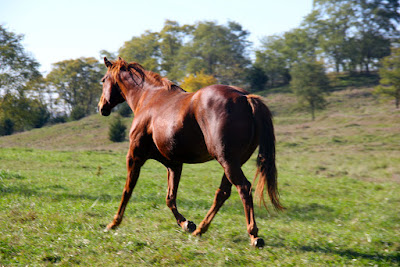 I expected him to wait around for the others to be unloaded but he was in a hurry to reach the herd and took off running. Bunni had a hard time catching up with him. 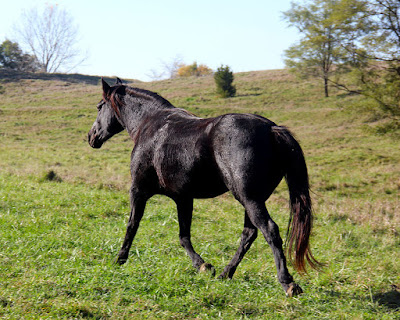 Missy and Sally were unloaded from the back of the trailer at the same time. They both hit the ground running trying to catch up with Mika and Bunni. 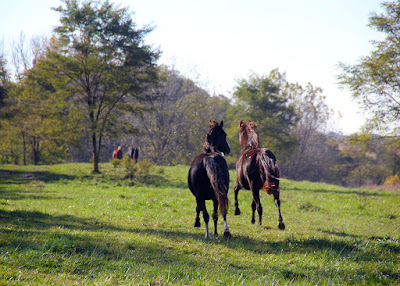 Dropping off horses at Middle Grove has never been easier. I drive in, shut the gate, open the trailer door and take the halters off. The horses jump out and take off. The trailer is shut, the gate open and out I drive. I made it back with enough time to back the trailer between the 2 barns for easier loading of the foals, ran in the house to eat a quick breakfast then took the golf cart out to the back field to grab Ribbon. She took one look at the leadrope in my hand and took off at a run taking the rest of the mares with her. She ended up in the field next to Valiant so that gate was shut. She knew at that point she had no hope and stood quietly while the lead rope was attached then led nicely out to the trailer but when I walked into the trailer she stopped dead. The last time she got in that trailer she was left at Dr. Hoerr's all night and they did nasty things to her, nope she wasn't getting back in there. Ribbon always walks right in the trailers. You know what they say about elephant's memories? Well Ribbon isn't just big like an elephant, she remembers like them too. I had to smack her but just once and then she reluctantly stepped in. Knowing what was going to happen to her today I felt a little bad. Her colt jumped right in the trailer, he likes going visiting. Rosalie and her filly were also taken along today but they both loaded without incident. I was only a minute late arriving but Dr. Boero had already arrived. 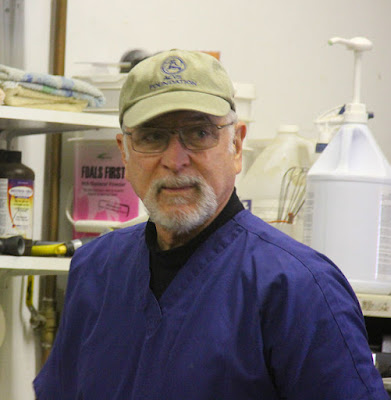 He and Dr. Hoerr looked over the x-rays then we brought Ribbon in and stuffed her into the stocks. 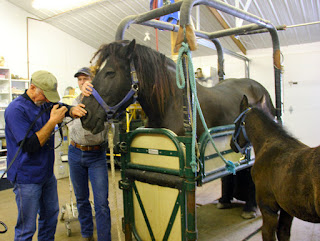 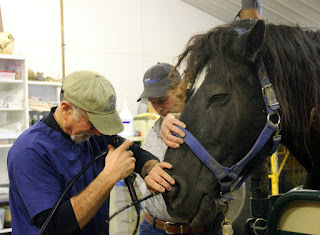 After looking up her nostril with the scope, Dr. Boero decided to try to remove the tumor here. When he went out to his truck to get the instruments needed, Dr. Hoerr pulled blood on Titan, Ribbon's colt for his coggins test. Titan was excellent today, well behaved and curious about what was going on but not getting into anything. 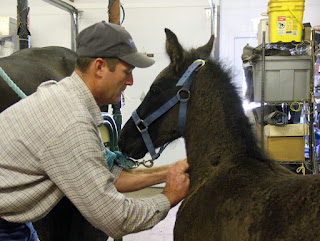 Below Dr. Boero is holding the scope in her nostril while Dr. Hoerr looks through the lens. 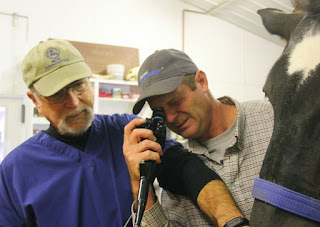 Below Dr. Boero is getting the instruments ready to try to remove the tumor. 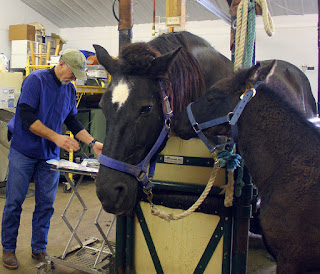 The tumor is bigger than expected and quite far back. After trying a few times Dr. Boero decided it would be better and safer for Ribbon if we took her to his clinic. If they cannot remove the tumor by going up the nostril they can put her under and lay her down at his clinic. At that point they will have to do the face flap where they remove the face bone, go in from that side to remove the tumor then reattach the bone. This would be major and have a much harder recovery. We will be bringing Ribbon to Mahomet, IL November 2nd leaving our place at 6:00 am to get her there ready for surgery by 8:30 am. Dr. Boero said we could stay and watch. He does not want her eating any grain the night before then asked, "does she eat a lot at night?" I pointed to her and responded, "She eats ALL night long, just look at her!" We will have to stall her before going to bed and give her just a little to eat that Tuesday night. As Dr. Boero was putting away his instruments Dr. Hoerr brought out his ultrasound machine and diagnosed Ribbon as pregnant. She is due Sept 5th, 2017 if she carries this pregnancy to term. There is always a risk when a mare is stressed and surgery is stressful. 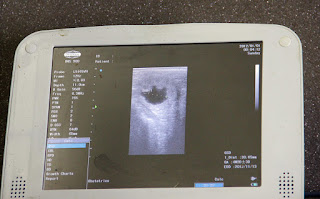 Once Ribbon was back in the trailer, Rosalie was brought out. Her filly had blood drawn for her coggins test and while I was there she actually SOLD! A lady from Florida put down a deposit on her. I wanted Rosalie sonagrammed because I have not seen her come in season since this filly was born. Well to my disappointment, the ultrasound showed she ovulated probably a week ago. Even though I hate to do this Rosalie was given a shot to short cycle her. This way even if she doesn't show in 5 days we will cover her and maybe that will make instinct kick in and she will start to respond to the stallions. 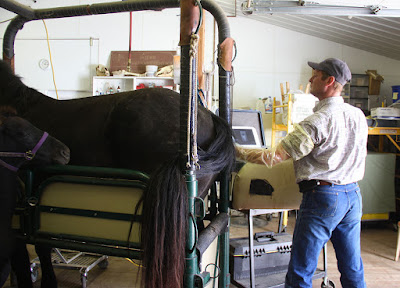 These horses were taken home and put back out to pasture, Eliza brought in and grained then I left for Sam's club for dog food finally arriving home around 5:00 pm.