After the walk Ribbon and her colt along with Indy and her filly were loaded up and taken to Hoerr Vet Clinic. We have been dealing with Ribbon's snotty right nostril since July and it is just not getting better. She was given 60 cc's a day of antibiotics in July for 12 days  which didn't faze it. Ribbon is having a hard time breathing through that nostril and with a body as big as hers she needs all the breath she can get.  There were a few things that could be causing this, a tumor, a foreign object or a sinus infection. We were hoping for the last. Indy went along just to confirm pregnancy. We were pretty sure she was as she hadn't come back in but wanted to make sure. Indy was first up.The picture below on the ultrasound machine shows a 6 week old embryo. She was bred to Evan and the foal is due August 1st, 2017, the same day as Roxanne who was bred to Valiant. These 2 mares were both in season exactly the same time. 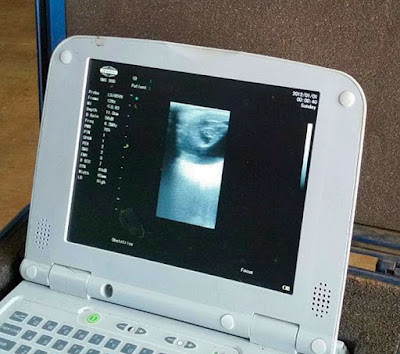 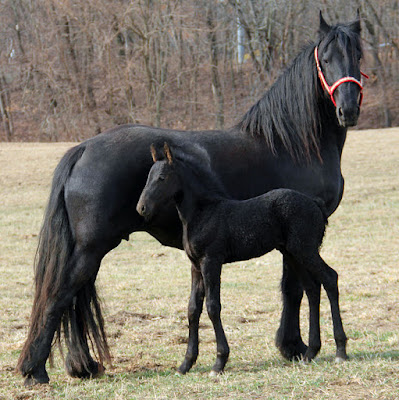 Next was one of the hardest jobs of the day, to fit Ribbon in Dr. Hoerr's stocks. It literally took 2 of us to cram her in and shut the back. She is touching all 4 sides and she is almost sitting on the back. 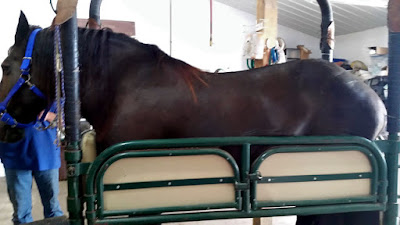 Her colt was curious about everything going on but not at all nervous. Below Ribbon has an upside down tumb tack taped to her head which was there to help identify the area in the x-rays. 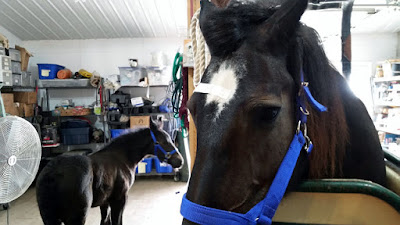 Below Chris is holding the plate while Dr. Hoerr x-rays her head. It took multiple tries to get her entire head but Dr. Hoerr found the correct area to show where the pus had accumulated. What the x-ray didn't show was a foreign object or a tumor. Thank goodness we are just dealing with a sinus infection. 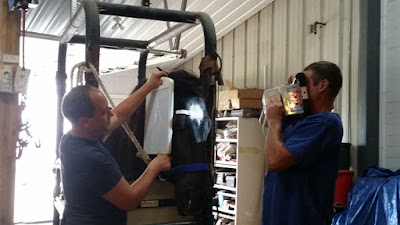 I left before the next procedure which Dr. Hoerr was going to do a bit later. He will drill a hole through her skull into the cavity that is filled with pus and flush it out until it runs clear then do it again and again for the next few days. 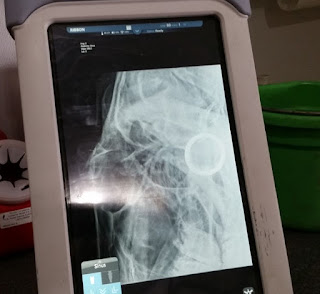 As soon as I made it home from the vet clinic, Indy's filly and Soul's filly were taken into the stall and both those mares loaded along with Roxanne. This is weaning day for those 2 fillies. Both are more than 5 months old and ready to be weaned. Indy, Soul and Roxanne were all confirmed in foal so all three were taken to Middle Grove. When the truck and trailer pulled in at Middle Grove the herd heard us coming and all came running down to the gate to meet and greet their herd mates. Since all of them came, Jenis and Marika plus Marika's colt were put in the trailer to take home and the rest of the herd moved into the summer pasture. Now that the gates are up we would like them to stay off the winter pasture for at least a couple months. They were thrilled to be in there and all took off galloping up the hill to their favorite mud hole wallering place.I'll need to buy a few salt blocks and haul them out on my next free day. Back at the Hanna City farm, Jenis and Marika were put in the pond pasture, Eliza fed, Sangria teased and covered. Sangria was not in as strong and is probably going out so I decided to take her and her filly out to Middle Grove today. Mika and Ripper were loaded first in the front of the trailer and Sangria and her filly in the back. This time when I arrived none of the horses came down to the gate, they were probably too far away to hear the truck. As soon as the horses were unloaded and let loose in the summer pasture I took off for home. I still needed to go to Sam's Club for dog food and groceries finally arriving home at 5:30 pm. I drove about 200 miles today going East, West and North.
The group down in Gulf Shores are all having a good time. Mom called with an update and Diane sent a couple pictures. Thanks Diane! 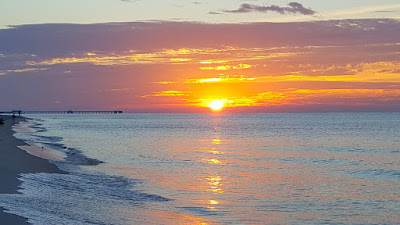 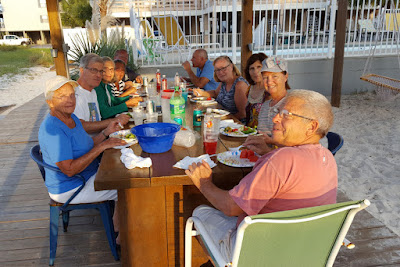 It sure is lonely around here with so many people gone.
Posted by Judy Sceggel at 7:55 PM