Straight Out of the Horses Mouth

Work today was productive, all the letters were processed and close to 500 Bibles sent out either to individual prisoners or to chaplains that will give them to prisoners.
Dr. Hoerr was scheduled early afternoon and came around 3:00pm. Jakob and Bow were first and both excellent for Dr. Hoerr standing quietly while he drew their blood for the coggins tests. They were left loose in the arena with Ribbon until the other horses were finished. Next on the list was Holly's mare Fire and yes she is pregnant. This was Valiant's first mare so we are thrilled to know both Valiant and Evan will be fathers in 2012. Holly's mare Calypso is in season today and covered by Evan. Holly wanted her wolf teeth removed and this is what she looked like after sedation and with the twitch. The first shot didn't seem to faze her so she was twitched and a second shot given before she relaxed. 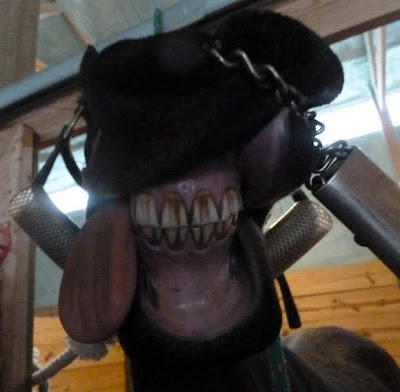 It was pretty funny watching Dr. Hoerr stuff her tongue back into her mouth. Dr. Hoerr also gave her an ultrasound which showed a follicle at 45 ready to pop. He felt she would ovulate within 24 hours so we will try again tomorrow to cover her before Holly picks her up.
Mike turned all of the heaters on of the automatic waterers as the temps are predicted to drop into the teens. He and Diane are leaving at 3:30am and won't be home for 8 days. We don't leave until tomorrow afternoon and will be home on Sunday afternoon. Surely the horses will be fine until we get back but if not Karin is staying here to take care of the dogs and will handle any emergencies.
Mark has a fire going in the woodburner and Gladys Haefli gave me some good books to read on Tuesday and so far I've only finished ONE. So looking forward to laying in front of the fire with a good book. The dogs will need to be moved for that to happen.
Posted by Judy Sceggel at 7:02 PM