Zephur and MY bad accounting 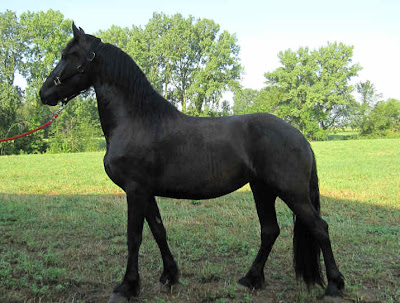 The name of the Friesian mare in for breeding is Zephur, although I'm not sure of the spelling. She is in season big time and was covered once this morning but that is considered a clean out for Raven as he hadn't been used for a week. A trip was made to the farm around 1:30 to check over Jenis' filly, Ylse's filly, and grain Samantha.
Jenis seemed a little uncomfortable so she was given 3cc's of banimine under her tongue, then a trip home to pick up another 10ccs just in case she would go into a full blown colic. By the time I was back she was fine so the banimine was put away in the office. A chair and book were brought in the stall so they could be observed for a couple of hours. A huge storm rolled in with a lightning strike somewhere close by that caused all of us to jump, then a deluge of rain. Around 4:00pm the rain stopped so Zephur was brought out for the real cover. She was so in I could hardly get her to walk by Raven to the hitching post. When Raven is brought over, she panics and won't accept him. The rain starts back up and after trying for 15 minutes getting soaked and covered with mud in the process, Raven was put away and Mike was called. We will need to try again in the morning with 2 of us.
Yesterday was so busy trying to get work done without my main helper that I forgot to make a run to the bank with the deposits. I knew there would be an automatic withdrawal for the credit card bill paid on line and last night when I checked the account it was short a bit so I borrowed from Mark's account and did an on line transfer but I forgot we ordered more checks and that also was an automatic withdrawal of $48.00 so my checking account was overdrawn this morning by $35.00. A bank run was first on the job list on the way home from the farm but too late, I now have a $25.00 charge but at least all the payments went through. I HATE throwing away $25.00 because of my poor memory or laziness. I think this is the second time in my life I've had to pay and that is 2 times 2 many.
Posted by Judy Sceggel at 4:25 PM