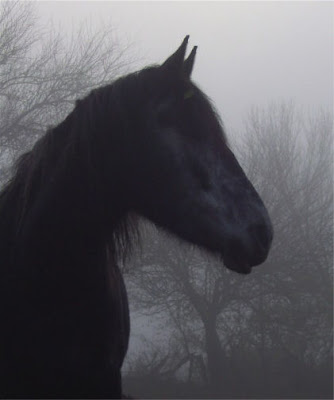 The mare in the picture above and below named Belle is a Percheron x Paint mare we are shipping semen to next week. Her owner Kersenz emailed the pictures to us today. She and Raven can't help but have a beautiful baby. I really like these pictures taken in the fog. Thanks for sending them Kresenz. We met Kersenz at the Iowa Horse Fair in Des Moinse when the vaulting team performed up there.

Another of Raven and Lily's colts are now performing. I just received word that Abel is up at Friesians of Majesty in the New England area. His owner is going to email pictures next week. THAT is SO COOL! One down in Texas working for Medieval Times and one on the east coast. I often wonder if the trainers handling those stallions realize they are 75% Friesian and 20% Westfalan, not 100% Friesian. Do you think the owners tell?
Posted by Judy Sceggel at 3:03 PM