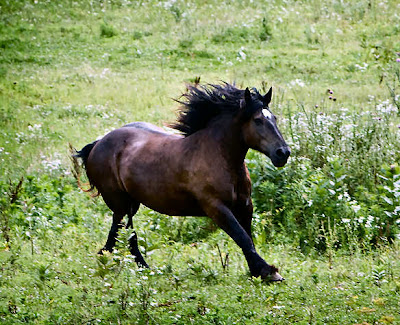 Karin was able to get Ribbon covered yesterday with no problem but while she was getting it done, Caden escaped by pushing between the gate and shelter. She said he was hard to catch. I had to laugh, each morning he sees me drive up and comes running. The ONLY reason we are breeding Ribbon back to Raven is because Princess, her last foal from him is so gorgeous! The picture below was sent to us by Princess' owner, Alesia Kata. Thanks Alesia, you talked us into trying for another just as beautiful, hard to believe your princess came out of the elephant! 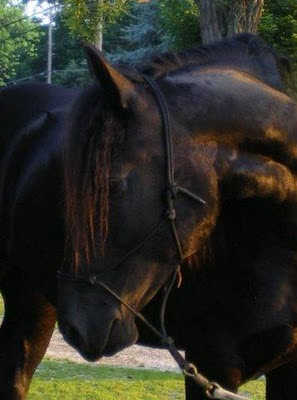 Mike brought Jenis over to Raven this morning and she is still showing so was covered. We believe she is going out, Raven just wasn't that interested. She should probably be checked tomorrow just for the sonagram date.
Carolyn from Meisters helped get all the Bibles stamped and ready for the post office between phone calls. I was so grateful for her help. Actually I was dreading today knowing the Bibles needed to be mailed out. It is so labor intensive but goes so much quicker with another pair of hands. After dropping them off at the post office it was time to go home for lunch. When I drove up, Philip and Caleb were there waiting and as I was cooking David joined us.
Amy called during lunch to tell me we had a bull dozier out in back. At first I was all excited thinking someone dropped off a REAL bull dozier (I have been asking for one for Christmas for years) but then reality hit when she started telling me of broken boards. She meant Dakota is plowing through some fences. Jamie and Ralph Stone, her owners were called and Ralph said it was because she was trying to escape the work camp we have her in. Laura Stiverson is training her and Dakota would rather be at home in front of her round bale lounging around.
Posted by Judy Sceggel at 12:41 PM