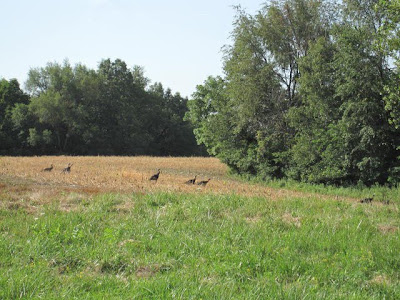 Driving home from the farm this morning I had to slam on my breaks to miss 30-40 wild turkeys crossing the road. This picture was taken after they had all crossed and were heading into the woods. None of them took off flying even after I got out of the car to take their picture, they just ran fast.
The window air conditioner was placed in mom's bedroom and started. The walk was cut a little short so Ylse, who is still in season could be covered. Bringing Raven over to the cabin is always fun. He starts out kind of slow until he realizes there is a mare waiting for him, then we end up trotting the rest of the way. He seems 18 hands tall as he is trotting over, the lift and power of his trot is awesome. Once Ylse was covered, Mike put a round bale in at the cabin under a tree so she can eat in the shade. We let Raven take his time going home through the field grazing as we slowly walk back. Today seemed extra slow, he got in at least 30 minutes of grazing. Sanna and Samantha are enjoying being in the breeding shed paddock. Mike has the fan installed on the ceiling blowing straight down onto them.
Mike was working on installing a drain pipe in the small paddock with the excavator when I left for home.
Posted by Judy Sceggel at 9:12 AM