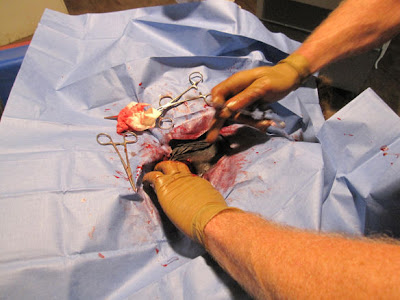 The lady buying Velvet's colt wanted him gelded before he leaves for his new home in September so Dr. Hoerr was glad to help us out with that. Above he is just finishing up and below is the colt on his operating table. Notice the bumper tires, they work great at keeping the colt in the correct position for this job. 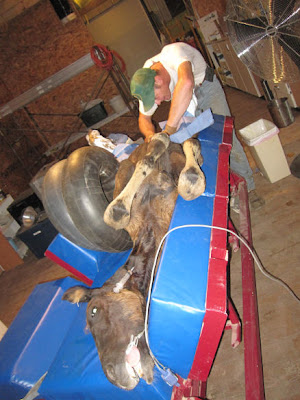 Velvet and her colt were picked up from the farm right around 10:00am. There was nobody around to help with the loading but they were both so well behaved I didn't even need any help. They were dropped off at the vet clinic as Dr. Hoerr had a sheep emergency. Middle Grove was next on the list of jobs for today. Bunni was picked up to use for a jump mare for 3 breedings! yes THREE. Two for this week and one for early next week. Mike's 4 wheeler was also picked up from Middle Grove and brought in to Hanna City. He and Diane were driving it from Norris to Middle Grove loaded down with saddles for a trail ride when it died. They had to be towed the rest of the way in to Middle Grove. Once everything was unloaded it was back to the vet clinic to pick up the horses except Dr. Hoerr wasn't quite done which gave me time to snap the pictures. Then it was wait and wait for the little boy to wake up. Once back at the farm they were put in the deluxe stall for rest and recuperation. Raven was pulled out and fly sprayed while I was waiting for his new water tank to fill up. His automatic waterer is turned off until we can repair a leak.
Posted by Judy Sceggel at 4:53 PM