Mark made an appointment for the car to get the oil changed at 8:40 this morning which meant I had to cut the walk short and leave around 8:00am. When I arrived at Peoria Toyota I was told this would take an hour and a half. As soon as those words were spoken my head started shaking. Nope, that is not going to work, I needed to be at the Berean office. It worked out well though, they were more than willing to give me a ride to that office where we had a good mornings work. To read about that click HERE. Mary Ginzel gave me a ride back to Peoria Toyota just before noon where I was shocked to find the car still up on the lift. No problem it took a bit to pay the bill. Now about that bill. Mark called earlier to ask how much for an oil change and was told $39.94. That sounded about right so before I left this morning, he said, "make sure you don't authorize any other charges." Well when the bill was presented it was for $59.55. Do you want to know WHY? The oil change was $39.94 but that didn't include the OIL or oil filter. The charge for those two items: $11.56. But that wasn't all, it also didn't include the gasket of $5.41 and of course they needed to charge for resetting the reset oil replacement reminder on the car for $1.13 and there was one more charge itemized as a misc. shop charge of $3.59. For the record, the place had a very nice lounge for customers to wait with lots of goodies and drinks all free, they also offered to take me to the Berean office for free. They were pleasant to work with and gave me service with a smile.
Once home the camera and video camera were taken out to the field. Eliza was called in for her grain then the other mares all wanted to come up to see what was going on. 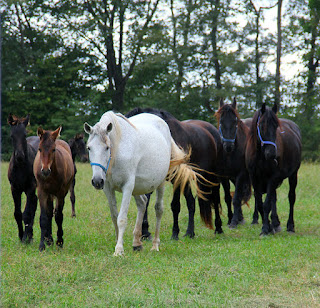 Indy and her filly Angelica brought into the outdoor arena to try to get a video. Angelica decided she would rather be with the other foals and decided to just jump out of the arena leaving a very worried Indy still inside. To see that jump click HERE. Ribbon was standing right about where Angelica jumped and was shocked to see that filly fall at her feet. She moved her colt away with a disgusted look at Indy and her filly. 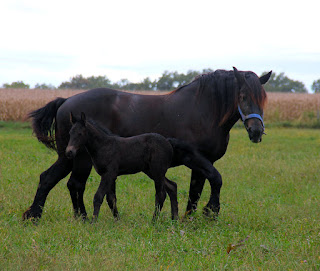 Angelica was taken right into the round pen and asked to trot just to make sure all was well. She was and is fine. What a goofy girl. I think she likes jumping but needs to learn to lift those back legs quicker. 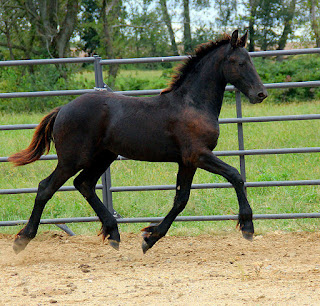 Soul and her filly were brought out next. Without help though I could not get a decent video and just took a short clip of Briana. To see her trot click HERE. 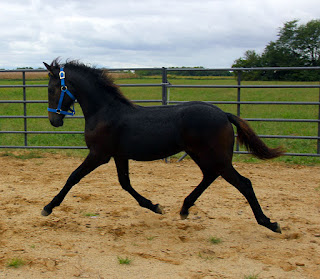 Right after work Mark went over to the playground to help chop up the tree Jay cut down yesterday. We had church tonight at the Fellowship Hall where Ken Hoerr gave us an overview of Peter. It was well attended and good to be there.
Posted by Judy Sceggel at 9:46 PM