A Day At Home

Rare these days that are free from driving. No rushing the walk, no quitting early, no scramble to load the car and pull out on time, just a relaxed day.
Early this morning Eliza was up waiting to be fed. She is now trained to show up at the front gate near Valiant first thing in the morning. None of the other mares were up, they were all out grazing. Thankfully she is putting on weight. After breakfast Bunni was brought over from the cabin field and stalled while the burrs were removed from her mane and tail. Cookie was brought inside next. She took longer as she has so much hair. Her mane didn't just have burrs it was also tangled but thankfully I have a lot of cowboy magic and got the job done within a half hour. These two mares were put next to Evan.
Soul and her filly were brought in and her filly, named Briana, was haltered and hooves picked up. She remembered and did very well. Soul has an extremely thick mane and tail. The mane was untangled but not braided. That will need to be done later as it will tangle right back up if not braided. Her tail needed to be washed but instead I just got the tangles out and left it for later. She and Briana were taken out to the outdoor for some updated pictures for the website. 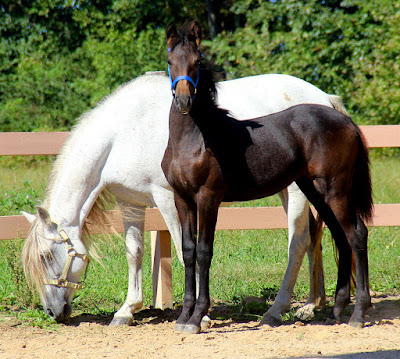 Briana has an appointment with Dr. Hoerr on Thursday to get her microchipped inserted and her blood drawn for her Coggins test. She will be 5 months old October 2nd. Check out her mane in he picture below. She has as much or more mane than a 5 month old Gypsy filly and moves much much better. She has the lift so desired for a dressage horse but then her dam is a purebred Andalusian and her sire is Valiant. She is for sale for $5000.00. She is registered, DNA'D and will be microchipped with IALHA as half Andalusian AND registered with Friesian Heritage Horse and Sport International as half Friesian so can be shown in both Friesian and Andalusian shows. 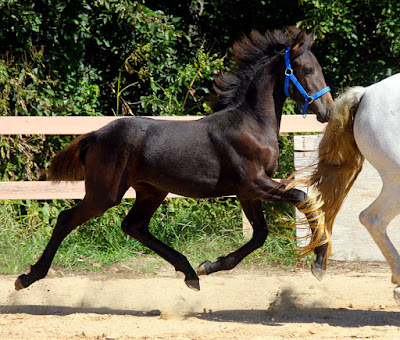 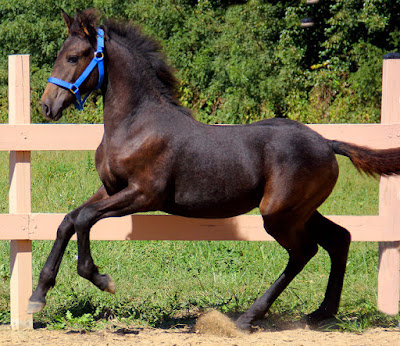 The other mares saw them and all came running over to watch which distracted Soul. 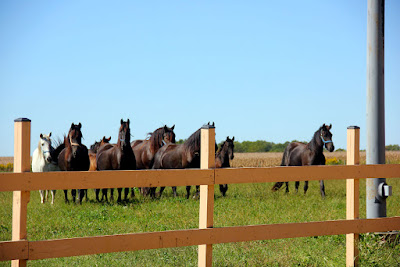 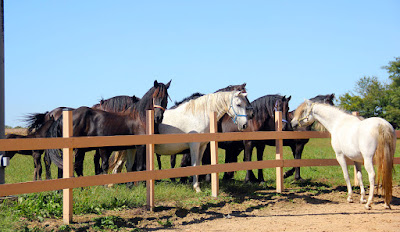 Once Soul was put away, Indy and her filly Angelica, were brought out for some updated pictures too. The water tank needed filling so that was started while Angelica's pictures were taken. 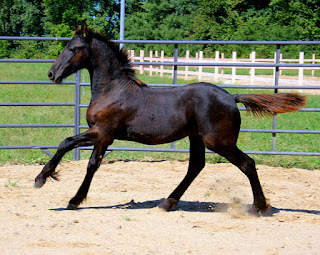 Check out the feather this filly already has at almost 5 months of age. Angelica is also for sale for $8000.00, she is a purebred Friesian registered and DNA'D with Friesian Heritage Horse and Sport International. She is old enough to be weaned. We have an appointment with Dr. Hoerr on Thursday morning to draw bloodwork for her Coggins test so she will be good to go to her new home within a couple weeks. 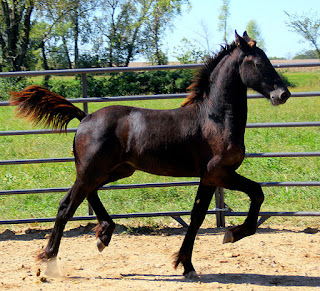 This filly will be tall, probably around 16.2 hands and have the mega hair of both her sire AND dam. Her sire is Evan...need I say more? The laundry was done while working on the pictures.
Jamie Stone came over with new pictures of her horses. Her mare Dakota was bred to Valiant last year and below is the filly that mating produced. Meet Legacy. 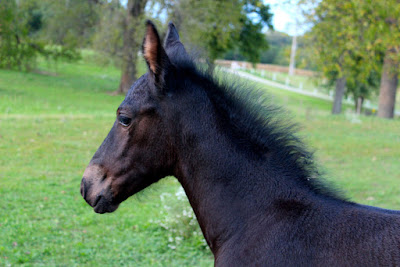 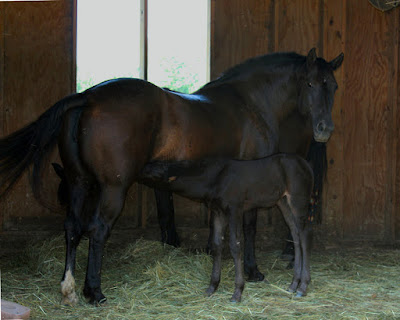 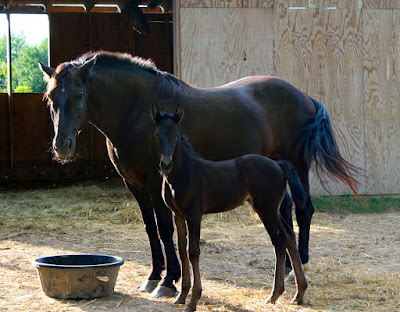 Below all three of her horses are running across the field with Dakota in the lead followed by Legacy with Myrrhcedes bringing up the rear. 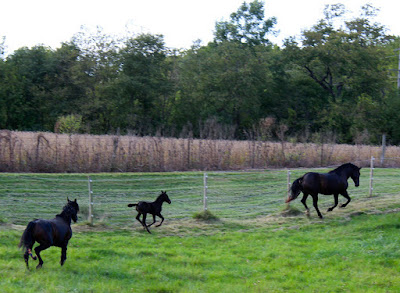 Myrrhcedes is an offspring of Raven, Valiant's sire and is a top notch show horse. This evening Mark mowed Valiant's pasture and the mare pasture next to Valiant's. We had a beautiful cool sunny day, perfect to make lots of electricity with Mark's solar system.
Posted by Judy Sceggel at 8:38 PM