After the walk Karin helped with getting Roxanne covered by Evan. Roxanne did not show until he went to mount then didn't stand very still, we ended up twitching her. We will try tomorrow and see if she will show before. Gertie had the grand daughters and happened to drive up on the golf cart just as Evan was getting the job done. She looks at them, turns to her grandma and exclaims, "that black horse jumped on the back of the other horse, that's RUDE." Taegan is just 3 years old. The vaulters started to arrive just as we finished up. The Monday group is a large group. 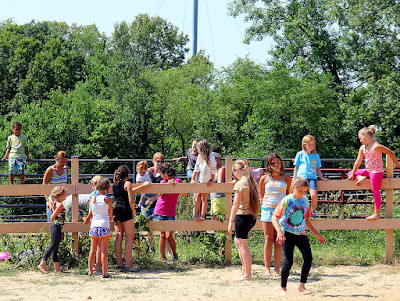 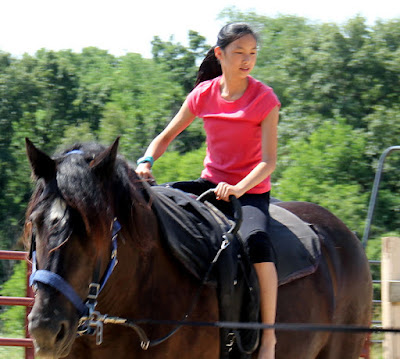 To see the rest of the vaulting pictures click HERE. Once the vaulting was over those that wanted to were given bridles and if they could catch and bridle a pony they could ride the pony in the round pen. There were 8 riders today that rode Missy and Cookie and all had a good time. No pictures, I had to drive in to Peoria for work. When I got back Jesse and Courtney were here taking Ella pony and Jenis out on the trails. They each had to ask Jenis for a rear before heading out. 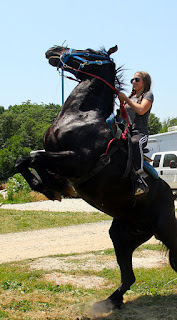 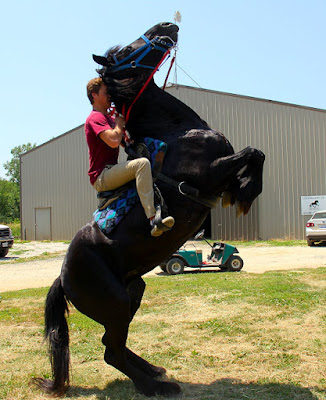 What an amazing fun mare. Rhoda taught her to rear on demand and she only does it when asked. I spent the rest of the afternoon with Braelyn, Taegan, Kensley and Gertie. We had a nice visit.
This evening was Peoria's first night of VBS. Rick Kaisner had the message and what a message. VBS this year is the story of Joseph, from prison to the palace.
Posted by Judy Sceggel at 10:32 PM