It was 99 degrees on my car thermometer driving home from work around 1:00pm. Steven Marchal was at the farm hosing off the horses. The window air was turned on and horses moved into the stall area again. The window units have it cooled to 88 still hot but that is better than 99 in the sunshine.
Rhoda pulled up while we were working and took Darcy swimming to cool her off then brought Ylse out to work on her bow. Even though it is 100 degrees inside she needs to be worked consistently if she is to learn this. 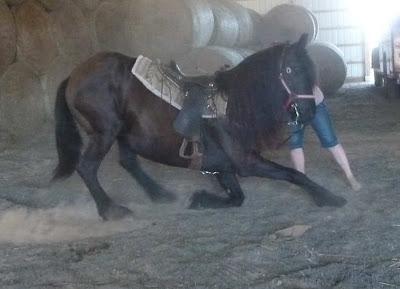 She was dripping wet after 15 minutes as were WE. Rhoda took her over to the lake to cool off. 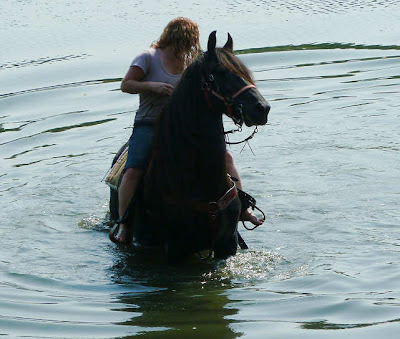 Ylse is such a beautiful mare. She was imported from the Netherlands and has her passport along with FULL FHANA papers. Her 2010 filly named Independence (Indy) as she was born on the 4th of July, looks like she will be just as hairy and smart as mom. She is at Middle Grove learning the ways of a herd right now so I don't have any updated pictures of her. Indy is for sale today for only $8000.00. She is a yearling by RAVEN and out of Ylse what could be better!
Diane arrived while Rhoda and Ylse were swimming carrying a big gift for our dogs. She found this HUGE bone at a garage sale. 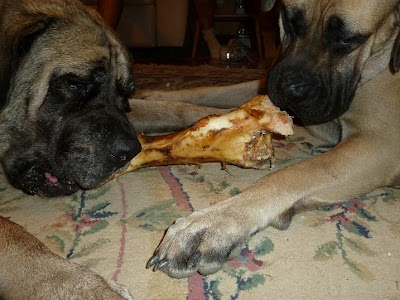 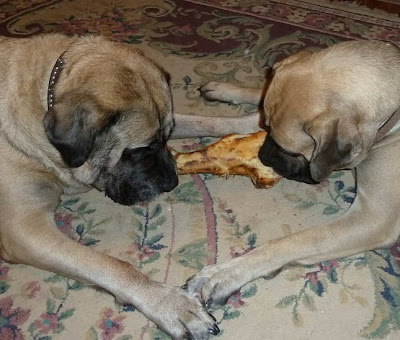 Our dogs were sharing fine until Ebby came over. 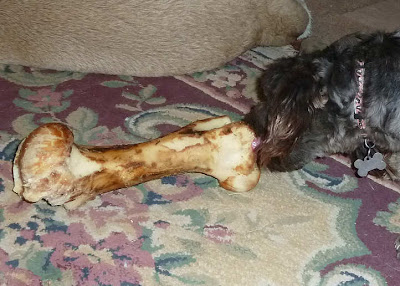 Ebby was very quick to claim the bone and the other 2 dogs moved out of range of her ferocious little teeth. These big Mastiff dogs are such wimps.