Aunt Jinny and mom were out surfing in the Gulf when they saw a big jellyfish. Before Aunt Jinny could swim away one of the tentacles grabbed her arm delivering a very toxic sting. Both ladies rushed up to the apartment to google the treatment. The first thing listed was do NOT wash it off with fresh water, too late already done, do NOT put ice on it, again too late. The treatment for a Jellyfish sting is either quickly apply 70% alcohol or vinegar. We had neither in the apartment but had some mouthwash with alcohol listed as an ingredient and salad dressing that had vinegar as the second ingredient. 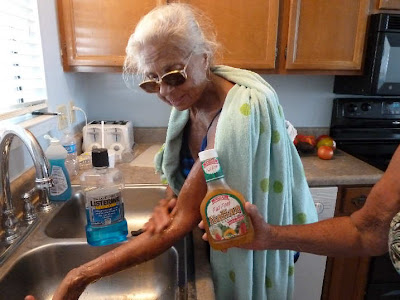 We used both on her arm but the blistering as the result of the sting was shocking. 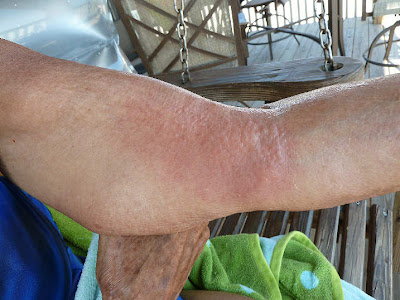 A small bottle of vinegar was found and applied while Beth is running to the store for baking soda. The next thing to do for a sting is make a paste of baking soda and apply that to the blistered area. While we were working on her arm, Aunt Jinny states, "you need to do this, I can't see." Of course we hear this and wonder if an ambulance should be called until she asks us to take off her sun glasses. Amazing what a little light does on the subject. Take away the dark glasses in the dark apartment and she can see.
Posted by Judy Sceggel at 3:37 PM