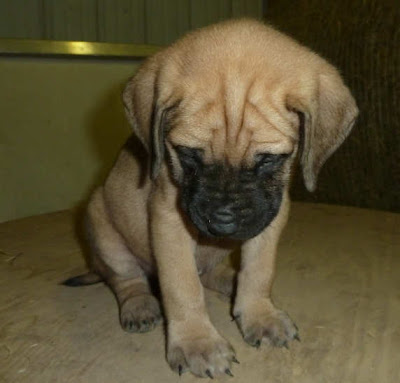 Jame's owner called just thrilled to report their stolen pup was back in their possession. The people that actually took him lived less than a half block away and were careful to only take him out side at night. Thank goodness someone saw this pup and he is back with his rightful happy owners. They made a 9:00am appointment for a microchip today.
Jenis' colt has found a new toy, he plays with the gate chains and has learned how to open the gate. Not that he went anywhere with out his playmate Lauralee but still a more secure knot had to be tied. 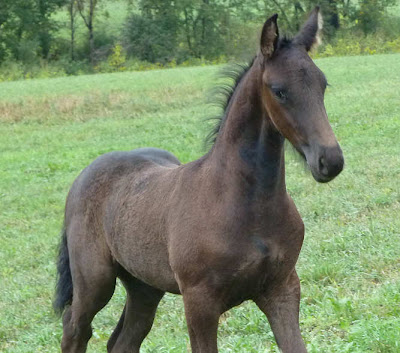 Mom, Beth and I are heading down to Gulf Shores, AL early tomorrow morning. Diane will be joining us on Monday. This sounds so easy to say but to prepare for this trip knowing we will be gone for 9 days today was hard. Laundry had to be started even before going out today. The rest of the day was work, work, work, just trying to catch up before leaving.
At least we get to start the day off right with a nice amble around the farm visiting with sisters and mom.
At the end of the first round of walk, Emma spies Heidi's brand new toy, grabs the toy in her mouth and tries to slink off before anyone noticed. 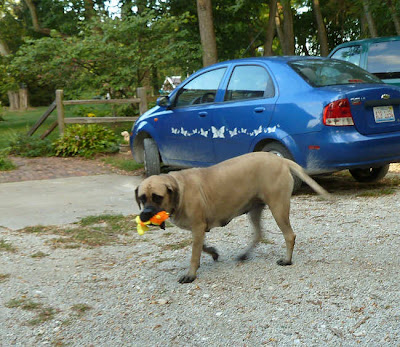 CAUGHT!
The Bible's were UPSd out today to chaplains in Maryland, Kansas and Alabama. Once those were finished, a quick trip back to the farm to change the machines, pack a suitcase, and unhook the trailer from the truck for the next trip in. Ylse was pulled out to cover but this was not successful. Raven was taken over to Ribbon and she is still in but not covered either. The truck had to be taken back to Peoria to get the oil changed and gas tank full. Steven Marchal headed out and did get Ylse covered so this will be marked down. He worked Eliza then had to head out to Washington, IL where he has found HAY for us, nice big round bales of alfalfa grass mix put up dry. We will be buying over a hundred of them.
Spark showed up to move the big trailer with the truck that was hiding in his weeds. This is a huge rig and would not make the curve but Spark found a way out through the dry field. 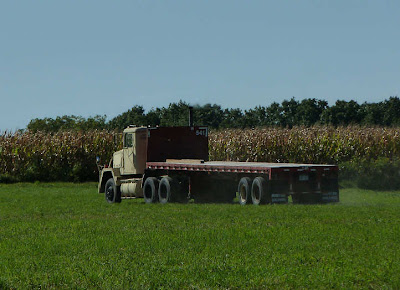 That's one job Mark really wanted done.
Lauralee got her first real lessons today. Karin had a vaulting lesson with Ribbon so Lauralee learned how to stand tied today. She also learned how to pick up all 4 feet without kicking and almost learned how to lead quietly. She needs a lot of work on the leading part. She was not happy.
Spark, Diane, mom and I headed over to Tremont, IL for Aunt Jean's visitation before church. It was good to see everybody and we are sorry we can't be there for the funeral.
We had a half hour to kill before church started so stopped at Culvers for quick bite to eat and ran into Ardith Herrmann, then Cleve and Kathleen Klopfenstein and then Bob Hoerr. Funny how we all get hungry before church and picked that restaurant of all the restaurants in Peoria.
Dave Obergfel had the service tonight, it was so convicting. He had it on the widow's mite, but went one step farther. Are we willing to give it all? Do we give from our surplus? Do we hold something back? We really must learn everything we have everything we think we own is not ours, it is the Lords, so if He asks are we willing to give?
Posted by Judy Sceggel at 9:17 PM