WARNING, THIS POST IS NOT FOR SMALL CHILDREN, OR THE SOFT OF HEART!
Diane called today with an update on the Big Elk Hunting Trip. She received a phone call finally from Mike to say he was cold, hungry and tired but having a WONDERFUL TIME!
They were camped at (I think she said)Carl Hoerr's land when Jozef saw a rabbit, not an elk, a sweet cute bunny rabbit. 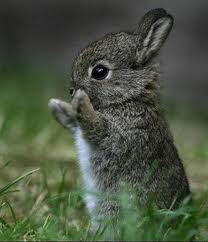 (not the bunny in the picture above, it was a wild jack rabbit)
He was able to chase it down, caught it then murdered the poor thing, skinned it and cleaned it, stuck it on a stick and cooked it over the fire. The guys must be craving fresh meat! Anyway Mike told Diane, he took a bite of it, then when none of the other guys were looking spit it out. Jozef, Andrew and Chad all thought it was delicious. It must be an acquired taste.
We are still waiting for an elk story.
Posted by Judy Sceggel at 4:32 PM