The first load of ag-lime arrived at 9:00am, the truck could be heard from the road before it got to the farm drive.
The camera was out ready but the truck kept coming and coming. 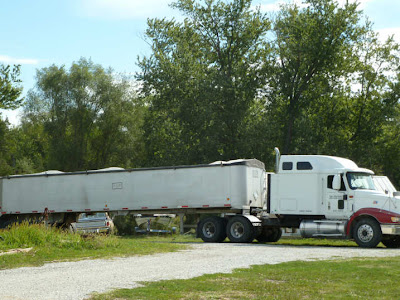 The driver was able to drive through the arena and into the field. 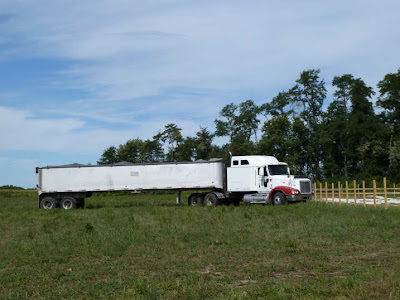 Very carefully he backed the semi into the arena and dumped his load. 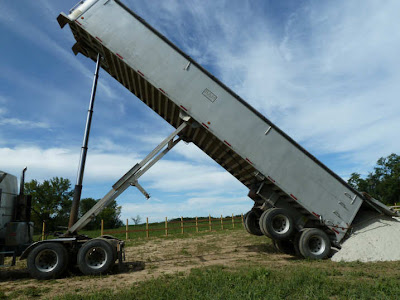 The truck actually belongs to the driver and his name is Tim Woodley. If you need something hauled and then dumped I would definitely call Tim, his truck is really HUGE and can haul 22 TONS at a time. Tim's phone number is 309-339-8534 if you would like to hire him. Tim brought another load out around 10:40am and will bring the last load tomorrow. 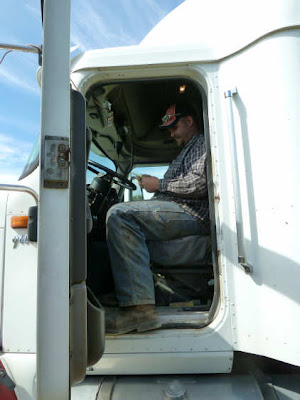 Between loads I got the skid steer out and had the first pile moved before the second load came. Once both loads were dumped they were spread as good as I could do it, not at all professional but good enough for now.
Tim knows where there is clean washed sand for the next layer and is willing to bring that also in semi loads. It really is who you know for good service!
Mark brought the Meister Electric van home, we will take that to Ohio tomorrow to pick up the copier leaving early in the morning.
We were going to work on the arena tonight but we are having a rain, a nice good shower, coming down hard enough to discourage us from working outside. So Mark is working in the indoor arena organizing our many piles.
Mike called from the satellite phone, Mika is sick. They got to Tom's house in Colorado and Mika came out of the trailer, started coughing, ate a bit of grass but won't drink, doesn't want hay and now he is standing shivering in the corner of the paddock. I think the dust from the trip got into his lungs causing the coughing and the shivering is from trailering all night long. They are going to call around to try to find some meds for him. All the packing and we forgot to send an emergency kit for the horses.
Posted by Judy Sceggel at 6:17 PM