The buyer of Velvet's 2010 colt was kind enough to send this picture and an update.
Thanks Vicki, we LOVE updates on Raven foals. 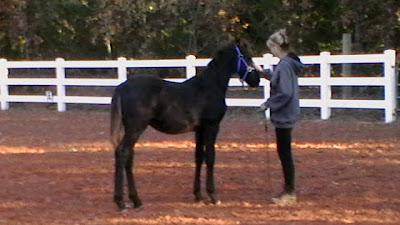 Vicki writes: Anyway...Rohan is fine....just over our one month period. He doesn't like his new winter crinkly blanket that i paid $90 bucks for - Ha (scares him and I can't get it on him yet). But he will wear a piece of rag I got out of the scrap bin. Go figure. I think he's coming a bit out of his gangly baby maybe for a month or two till we hit another growth spurt........when I think he's photogenic again I will get some video. I am going to try and send you a picture though........(but for whatever reason I look super skinny. Ha. Not so. ) I may have to save it just for that reason.
I did want to tell you Aragon looks like a totally different horse than the video I watched of him this summer !!!! He is turning PRETTY....

I think I need to borrow her camera, I emphasized one of her sentences, hope she doesn't mind. Usually the camera adds pounds, I like the way hers works.
We were up in bed by 9:00pm last night both of us exhausted from the busy day. Around 5:30am Rhoda's radio wakes us up with a very loud radio preacher yelling. Since there is no reason to be up that early on a Saturday we don't jump right up until... I was sure my nose was smelling a new pot of COFFEE. Down the stairs at a run (it's called momentum) and find out there was no coffee on, it was all in my head. With Pavlov's dogs it was the sound of a bell that brought out the saliva, it must be Rhoda's radio that makes my brain trick my nose, that is not a nice trick.
Posted by Judy Sceggel at 6:39 AM