Well the BIG winner of the auction was our Skyline Home! We were trying to raise money for a computer charting system and both Mark and I think we probably exceeded the cost of $36,000.00 last night. Beth and Greg donated a day at Norris for next summer that brought $2200.00. That's for ONLY 1 day! I believe that donation was the second highest item auctioned off. The family that bought it has lots of kids, we will have to see if Beth would like us to bring the horses! We purchased the items below. 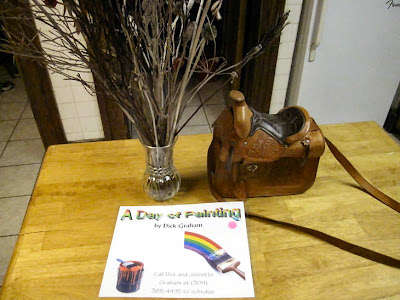 Now everyone that knows me is going to wonder what in the world am I doing buying some kind of weed arrangement and that purse, do I really have the guts to USE it! I've got PLANS people, maybe not good plans but the home got a good donation. The third item we won was a day of painting by Dick Graham. Mark thinks I bid on that because I'm lazy trying to get out of finishing the Horsemeister office. Hmmm The Graham's will do a MUCH better job than I would have, after all they are professional.
Diane bought a church bench from the old Green street church (we're talking REALLY OLD) and mom bought a quilt.
Posted by Judy Sceggel at 5:27 AM