Mark had to leave early for work today as Phil was picking him up at 6:30 am breakfast was cooked about 6:10 am then out I went to feed. There was Eliza dead in the middle paddock with her colt standing over her body calling. There was no sign of a struggle, she was just laying there dead and had been dead for hours. Yesterday afternoon she was panting a bit in the heat so spent the afternoon and some of the evening inside the cool barn. She was fine when she was taken outside with absolutely no symptoms of pain or any indication that anything was wrong. She was only 16 years old. Dr. Hoerr was called, he recommended starting the colt on milk replacer which they have at TSC. Karin and I made it down there around 8:00 am got home and mixed up a batch but couldn't get him to drink it.
Meanwhile Ayanna, Foxy and Sheena had a vet appointment at 9:30 am at the vet clinic. Karin helped load those mares plus Sheena's filly up in the stock trailer then she stayed with the colt. As soon as I pulled up at the clinic Aaron came out to help bring the mares in for their ultrasounds. All three were confirmed in foal.
Dr. Hoerr came up with a game plan for Eliza's orphaned colt. He is going to order drugs to give to our mare Sally. These drugs should be in by Tuesday so Sally and the colt will be going to Dr. Hoerrs Tuesday afternoon and staying for the next 5 days while they give Sally the drugs to help her bring her milk in and accept the colt. He said we have 80 to 90% chance of this working.
Ayanna, Foxy, Sheena and Sheena's filly were loaded up and hauled straight out to Middle Grove. Karin met me at Casey's in Hanna City to help drop off the this load. On the way we talked about bringing Ella and her colt home and trying to convince Ella to nurse two. We loaded those two up and brought them home. Ella's colt was taken away and put in the trailer so Ella couldn't hear him calling. We worked for hours trying to convince Eliza's colt to nurse off Ella and her to accept him before giving up and giving her own colt back to her. Around 2:30 pm he finally drank his milk from the bucket, finishing it all, even licking the bucket. The plan was to haul Eliza's body out to Middle Grove for burial this evening but the day was hot and the sunshine bright. Her body was beginning to stink. Mark came home early and started digging a grave, 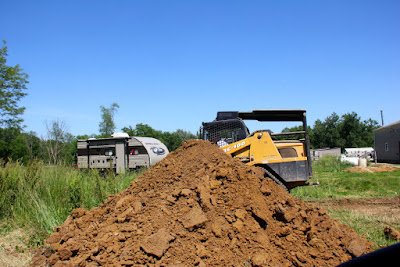 moving tons of dirt. Eliza was a big mare and the grave had to be deep and wide. This is a hard loss for us. Eliza was such a great mare and so very beautiful. 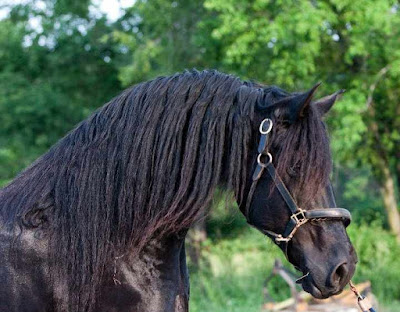 Her foals were all amazing with wonderful sweet dispositions and gorgeous looks. Oksana was her very first foal born in 2012. We actually sold Oksana but the owner changed her mind after paying quite a bit of money for her asking for two of our other mares, Claire (a TB mare) and Cor (warmblood) instead. We were thrilled to keep Oksana. 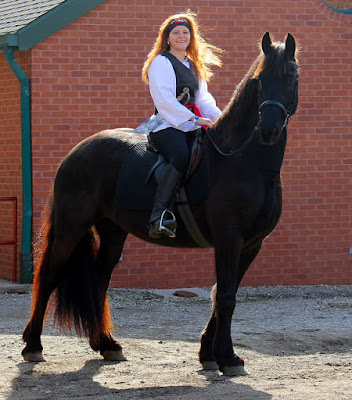 She was bred back to Raven and May 28th, 2013 delivered a colt. He turned out big handsome and so very smart. 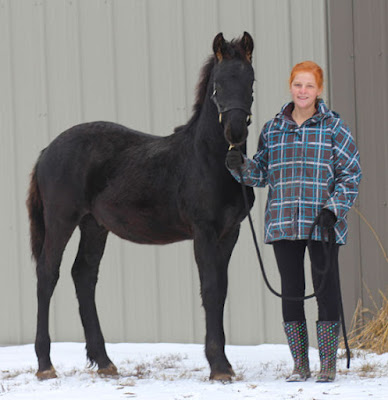 On May 7th, 2014 Eliza delivered a big beautiful filly by Valiant. 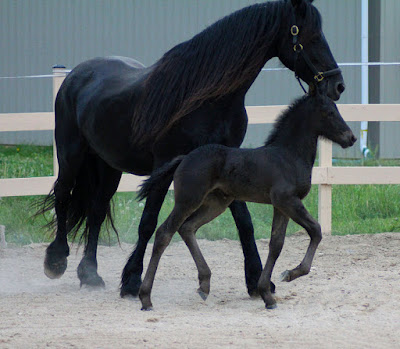 On May 8th, 2015 Eliza delivered a colt by Evan. That was the year that both Zalena and Eliza were taken to Hoerr Vet clinic for ultrasounds to see where they were in their season and both mares were just about ready to ovulate. Valiant had already been used for that day so we had Dr. Hoerr collect Evan, split the semen between the two mares and both conceived. 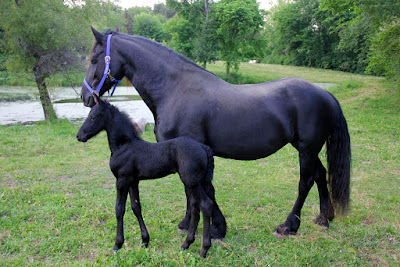 On May 15th, 2016 Eliza delivered a colt by Valiant. Another gorgeous huge colt with amazing movement. 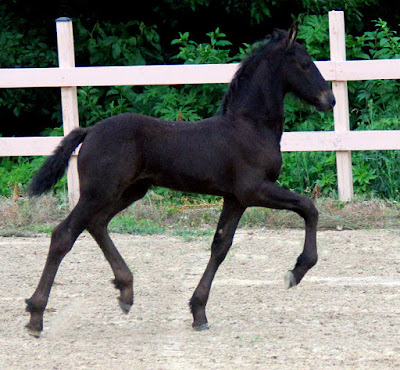 We all feel so bad for this young 15 day old orphan colt losing his mother so suddenly. All of us are praying Sally can start producing milk and will accept this little motherless colt. He NEEDS a MOM.
Posted by Judy Sceggel at 6:43 PM