The Showing of Sophie 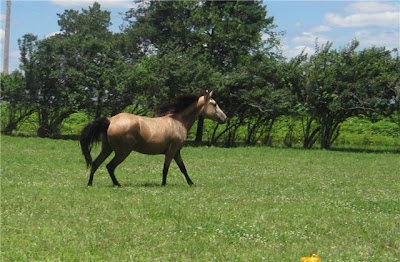 We were a little late getting home from church, even before walking in the door to check my phone, Sanna was put in the stall for her grain. Then once in the house there are 5 missed calls and one message. The message is from Steven in a panic, he cannot find the horses. He called in Karin and the 2 of them spent almost 2 hours hiking up and down hills, through creeks, over dams and into the woods without finding the herd! There is also a message from the lady coming that she will be here at 3:00pm. Karin was called back to tell her to call Johnny and have him bring the 4 wheeler but just then she found them all napping in a gully. It is now almost 2:00pm and Sophie is full of burrs. She has such a thick mane and tail that she seems to collect them out there. Since we have an hour I decide to move in a round bale for Sanna and Autumn, hear voices and oh no, it is the prospective customers. Indiana time is an hour later. Steven was called to tell him they are already here, he was driving through Trivoli at the time, how in the world would he get her cleaned up in time. He called Rebekah and I called Diane and the three of them started pulling and pushing poor Sophie around trying to clean off the burrs. I take the couple, which is a very nice husband and wife in their 60s to the farm, show them Raven, check to see if Izadora is in season (not) show them Jenis, Ylse and Indy then head over to the cabin. They had all the burrs out but Sophie was a bit nervous, hmmm wonder why? pulled off a vacation home, thrown in a trailer that is pushing 80 miles an hour to get back in time, then her mane and tail hair pulled over and over oh yeah what a perfect way to show a horse. (that was sarcasm by the way)Sophie was tacked up and I had Rebekah ride her first as she hadn't been ridden for a while. She seemed ok so Berta the lady climbed on and they went for a short trail ride. When they arrived back at the barn she wanted to see Sophie canter so Rebekah jumped off Bunni and mounted Sophie while Steven jumped on Bunni. The 2 went cantering off the fields, then Berta wanted to see Sophie run by herself. Sophie decided she was coming back to the barn and did a lot of sideways then as Rebekah rides her into the barn, Sophie ends up down on her knees. I wasn't looking so don't know exactly what happened but sure glad it happened with Rebekah instead of Berta.
We believe she is a little too green for Berta so Berta is going to look at training options where she lives. I'm telling mom about how frazzled things were and mom states that's what you get when you try to sell a horse on Sunday.
All summer Sophie was used for camps and trail rides and even if we'd had only one day with her here to work her by herself, we are sure she would have been fine. Oh well, we do really like Sophie and don't mind keeping her if it doesn't work out with Berta.
Posted by Judy Sceggel at 5:16 PM