At 12:40 am Marika's water broke and she promptly laid down having contractions. Karin arrived and we all made ourselves comfortable with buckets to sit on, the video camera rolling to record the birth but nothing came out. Her water had broken in a gush that seemed to go on and on giving that part of the stall a good soaking. At 1:00 am I had to go in to see if the foal was not presented correctly except I couldn't feel ANY foal. Reaching as far as possible, feeling both sides of the birth canal to make sure I was in the correct uterine horn and was shocked to find an empty uterus. Below Amy and Karin are desperately searching the internet on their phones googling breach birth. 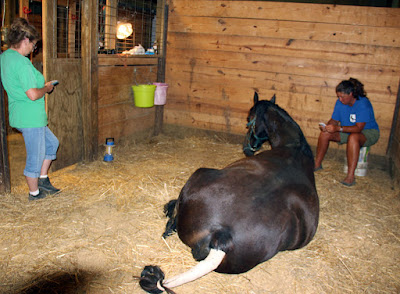 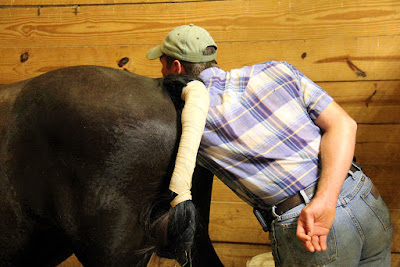 He tried different positions, tried to get as far down as possible but each time came up with the same answer or an even worse answer. 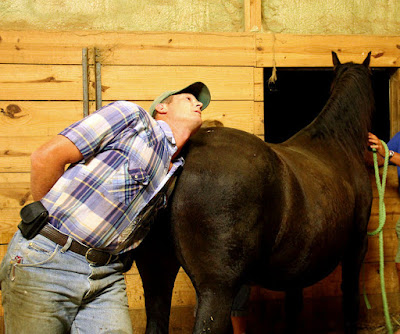 Around 2:30 am he says', "I can get down to the foal but it is separated by the uterine wall and at the base I'm holding on to a fist full of arteries. By this time we are scared we are losing Marika and pretty much had given up on the foal believing it must be deformed.  Dr. Hoerr had a frank talk with us telling us the ONLY way to save the mare, IF the mare can be saved is to drive her to U of I NOW for an emergency C section. At this point he is pretty sure the uterus has ruptured and the foal is now in the abdominal cavity. Can you imagine a foal in with all those intestines and the mare's uterus ruptured and bleeding? Amy Koch grabbed a couple water bottles, her phone charger and jumped in the truck just as Karin and I loaded Marika. The 2 and a half hour trip was a nightmare believing we were going to find a dead mare in the back of the trailer when we arrived. The U of I crew were waiting at the door and took us right in. We were surprised to find Marika up and quiet. She was lead onto the scale and weighed in at 1375 pounds then taken into the exam room where she was examined by Dr. Shippley the U of I vet. He did the same exam Dr. Hoerr did, reaching his arms in as far as humanly possible then gave us the exact same diagnoses the foal is NOT in the uterus, Marika must have surgery and it must be done quickly to save her. 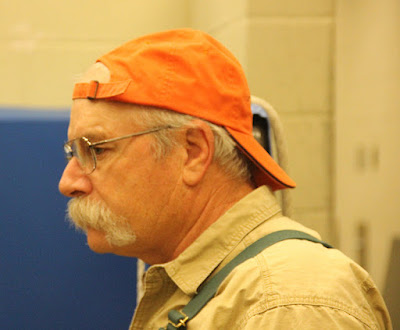 Marika was shaved, scrubbed then sedated laid down on the table, given socks, scrubbed again and again. 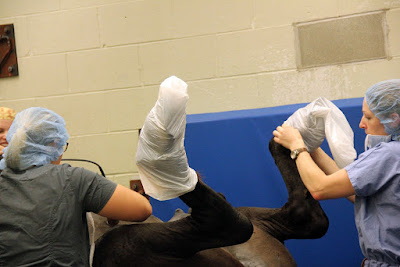 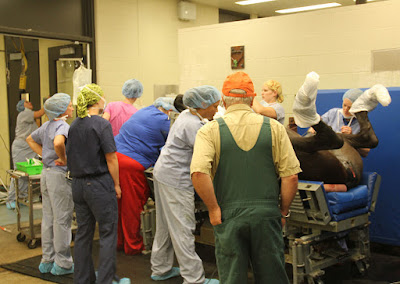 Above they are preparing her for surgery and below they are moving her into the operating room. Amy and I were blessed to be able to watch the entire surgery on the monitor in the student lounge. We were able to see when they found the foal. 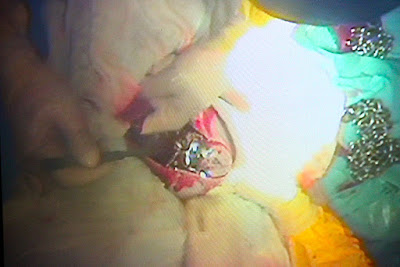 Below is the foal's rump, they are hauling him out. We are expecting a dead or deformed foal and were not quite sure what we were looking at until we saw the neck and front legs. 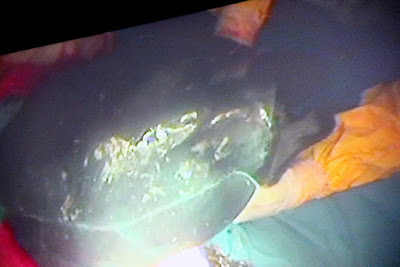 We ran down to the room and were so surprised and thankful to find a strong, big, healthy, PERFECT colt! The vet's were busy suctioning his lungs out and checking him over. 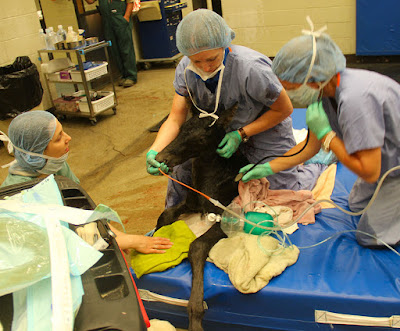 He was given an oxygen tube and shaved for a IV all the while fighting to get up. It took 3 people to hold him down for the insertion of the IV. This colt was more than ready to be born. Below is a picture of his slippers, all newborn foals are born with these soft sponge like material so the mare's uterus won't be damaged. Check out the feather this colt was born with. He is going to be one hairy colt. 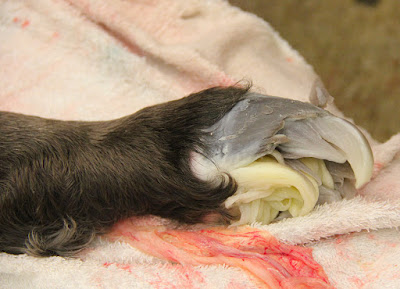 About this time we were told the uterus had not ruptured and the foal was still inside the uterus. The colt was stuck in the lower part of the uterus with both sets of legs folded over which doesn't explain why I plus ALL the vets that examined Marika could not feel the colt inside the uterus. The uterus was pretty badly bruised but we haven't heard a good explanation yet other than there would have been NO WAY Marika would have been able to deliver him. If they hadn't have been brought in to the hospital they both would have died. The colt was taken to the stall where he figured out quickly how to stand and was hungry searching for the milk. 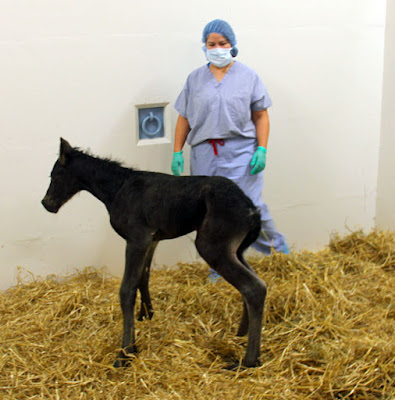 He was tubed and a liter of colostrum was given to him. 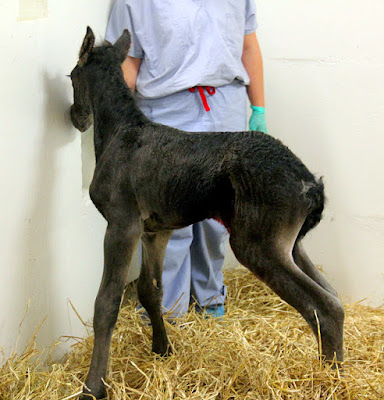 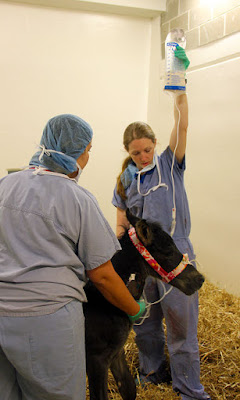 It wasn't long after that Marika was out of surgery and waking up. Amy and I left for home around 8:30 am by this time we have been up for 28 hours and we are exhausted but amazed that we have a living mare and a strong beautiful colt. A U of I vet called with an update while we were driving that Marika and the colt were now both in the same stall and bonded. We stopped for some breakfast and coffee then had to push to get home to meet Kathy who was bringing her mare Patty to be bred to Valiant. I'm going to grab a nap then go out to work later. So so thankful but so very tired.
Later today one of the vet students sent the picture below with the text: Pic of him nursing, we where changing her belly band for a tighter fitting one but we had to wait for him to finish nursing, he kept pushing us out of the way 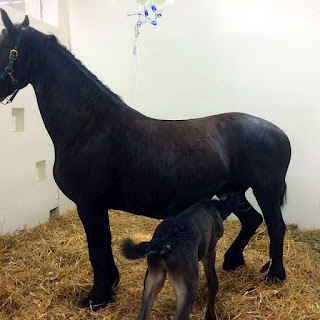 Marika should be fine and able to come home in 5 days if all continues to go well. She is still on IV fluids and has not yet passed the placenta which the vet said was pretty normal for a c section. She is getting oxytosin every 6 hours to help her uterus contract. Praying that this happens soon.
Posted by Judy Sceggel at 11:30 AM