A few years ago we went to an auction to pick up buckets and manure forks and ended up bringing a rescue mare home named Holly. To read about that night click HERE  and then HERE, but this isn't what that post is about. Holly was bred to Valiant had produced a beautiful bay filly a few years ago. 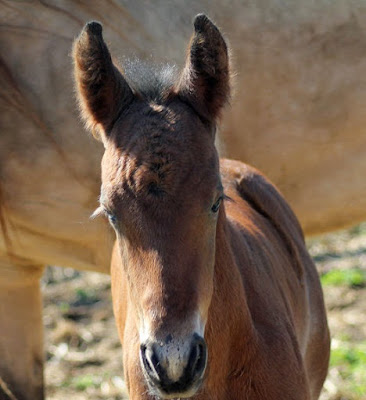 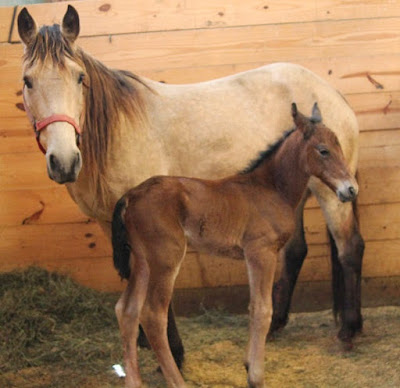 She was named Victoria. Holly was bred back to Valiant and sold as a three for one price package. Well the owner just contacted me with updated pictures of Victoria and her FULL brother. Holly produced a beautiful BUCKSKIN! The pictures below are from Brittany of these full siblings Victoria and Duke. She writes: Hello Judy, I purchased Holly and Victoria from you a couple years ago and you asked for pictures when Victoria got older. Here are some pictures, they aren't close ups but if you want better ones I can always take some more for you.  They are all doing very well and Victoria is a big sweetheart. The buckskin is the second foal Holly had! I have named him Duke.  They are almost a spitting image of each other. Other than the color of course! The last picture is of the two foals last winter and the first picture is of them this last summer. If you look close as Victoria's back you can see the little black bird the horses have taken in as a pet!

Victoria is the biggest sweet heart and tries to please. She is the first one to run up to me in the pasture and is a "in your back pocket" kind of horse! She is still green broke because I didn’t want to start her to early but she is coming along great.
Thank you for the wonderful horses,
Brittany 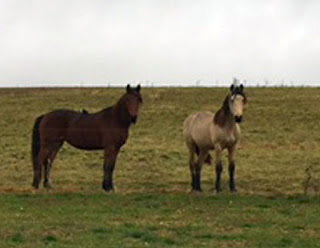 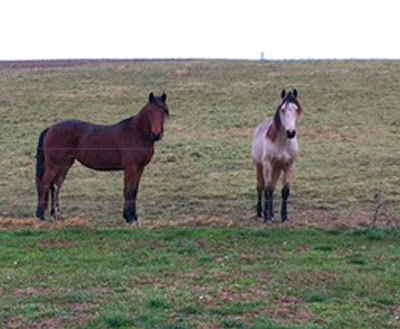 WE are thrilled with updates like this and so thankful Brittany let us know about Holly's son.  Karin trained at Middle Grove this afternoon. When she arrived there were horses all laying around enjoying the sunshine.
She reported the horses were all content. She worked with Foxy today and was pleased with how well she did. She also is sure that Jewel is not pregnant. We will need to bring Jewel, Rosalie, Galena, Marika and Foxy in for breeding the middle of April. Rosaleigh she felt should also come in to be checked. Roxanne looks great.
Mares that will need to be brought in soon for foaling are Star due April 17th, Lola due April 19th and Soul due April 21st.
Mark drove mom and me to church. Mike Rieker had the service. I must admit, I should have taken a nap before church, I was almost too tired to listen very well and yet the TRUTH was spoken.
Posted by Judy Sceggel at 9:47 PM