The Horsemeister Pirates of 2017

Introducing the horses and riders of our production this weekend at the 2017 Illinois Horse Fair: 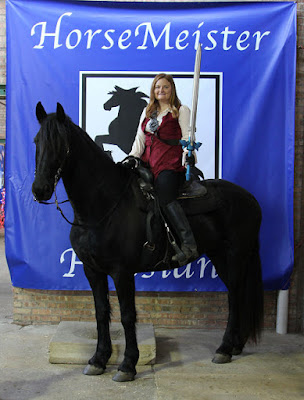 Above is Rhoda Bork on 4 year old Rosalie, below is Nolan Smith on Eliza. 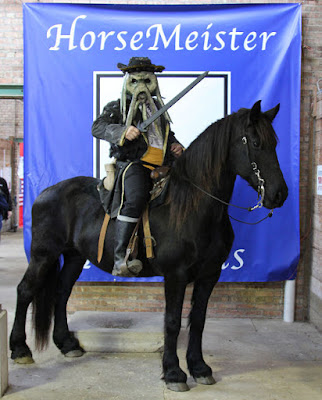 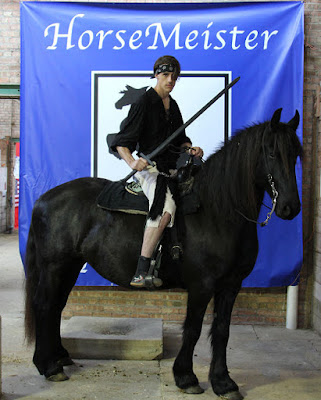 Above is Tyler Stembridge on Indy and below is Caleb Sauder on Zalena. 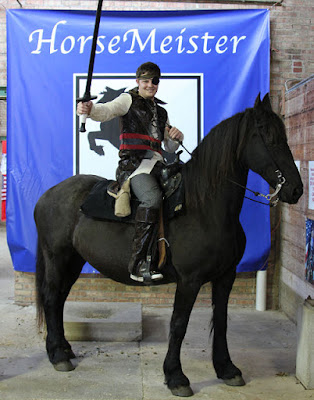 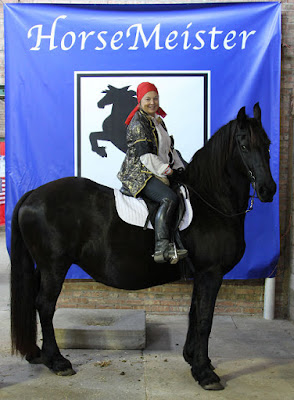 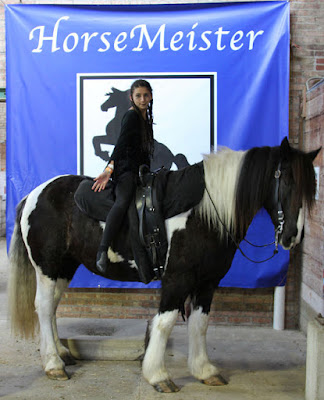 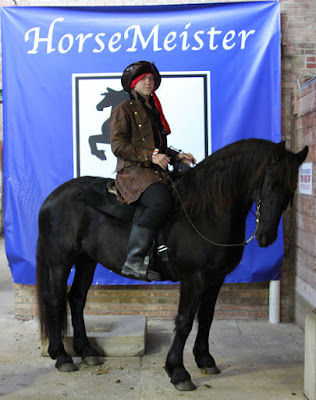 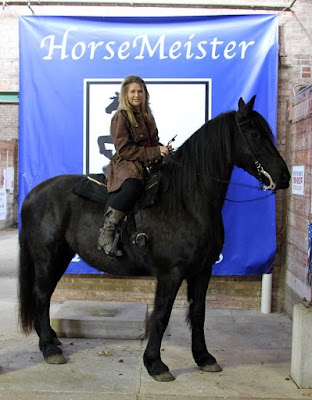 Below are Emily and Mitchel Cooksey on Jenis 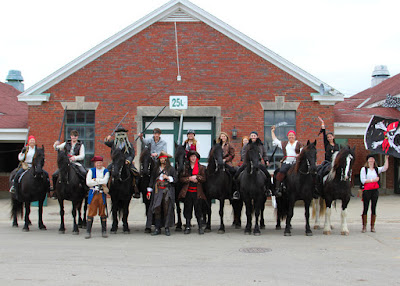 Above and below are the Horsemeister pirates. What an amazing group of young people. 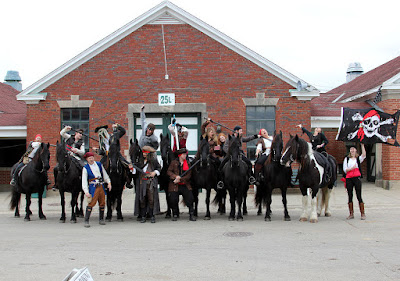 Below is Amy Koch riding very pregnant Anna. Anna is due in a couple weeks so Amy had to be careful of what she asked Anna to do. We told Amy if Anna starts to deliver during the performances to just go with it and act like that was part of the show. (we were reasonably sure she would be fine but she could not be left home this close to her due date) 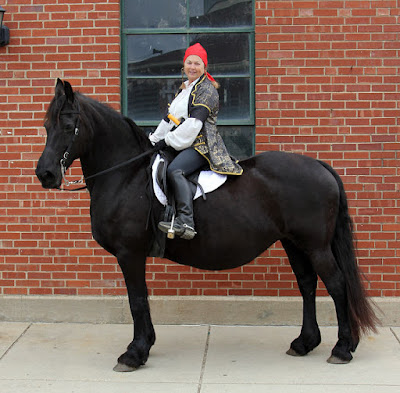 Below is Hannah Reinhard and Galena. This was Galena's very first time to go to the Illinois Horse Fair. We were a little worried how she would behave but she did better than expected. Our only problem with taking Galena is all of those WHITE markings that must be kept clean. 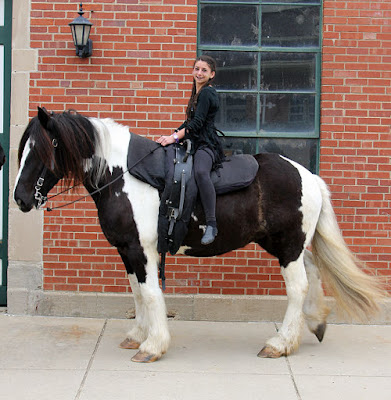 Below is Karin Meister on Oksana. Karin was the trainer of 7 of the horses and all the horses did extremely well even with the applauding, screams, whistles and noise of the crowds at the fair.  We are not sure if it is because Karin is a really really good horse trainer or these are just good horses. 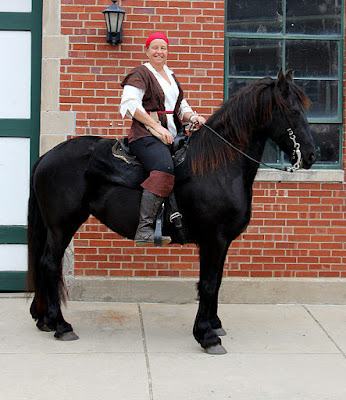 Below is Caleb Sauder on Zalena. Caleb started out as a vaulter when he was just a young whipper snapper. Now we have problems with him always wanting to point those toes instead of heels down. He and Zalena were a good match, Zalena loves to go fast and so does Caleb. 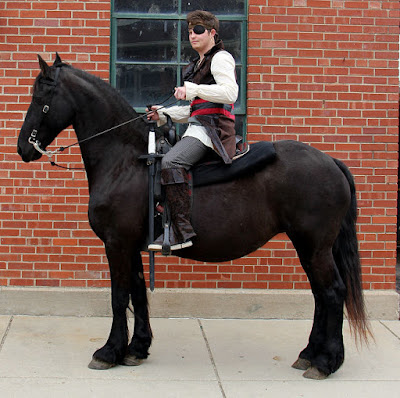 Below is Nolan Smith who had the hardest job during these performances. He had to ride with the mask as he was Davy Jones. He is riding Eliza who was the perfect horse for this year's performance for Nolan. When Davy Jones is killed, Nolan had to fall off his horse and pretend to be dead. Eliza would just stand there and look at him and we could trust her not to step on him. 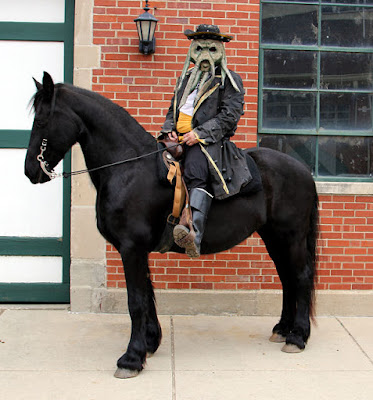 Below is Anni Davidovics on Ayanna. This was also a good match. Ayanna is a hard mare to ride as she has such big movement and sometimes kicks out. Anni had no problem sitting that movement and finished each performance with a bow. 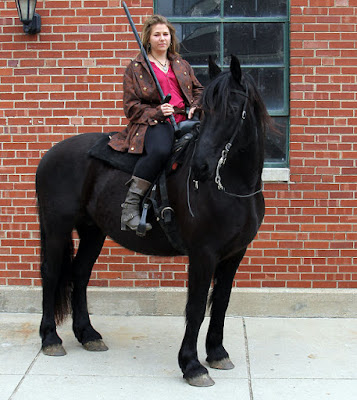 Below are Rhoda and Lee Bork. This was Lee's first year to perform. We needed land pirates and Lee was willing to step in. He did an amazing job fighting Captain Jack Sparrow in front of that huge admiring audience. Rhoda is riding Rosalie who just turned 4 years of age and had never been to the fair. Rhoda has done all the training on Rosalie and we were all absolutely thrilled with how well she performed all weekend. 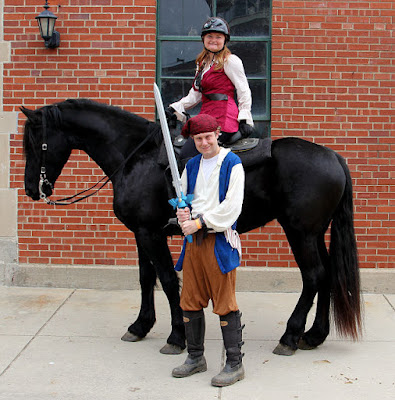 Below is Mitchel and Emily Cooksey. They were married December 31st, 2016 so still considered newly weds. At the end of the performance, when Will Turner (Mitchel) kills Davy Jones then rides over to pick up Elizabeth (Emily) we told them to kiss. The first performance he just gave her a quick peck. We told him to make it much more romantic as these two MET at the horse fair years ago. 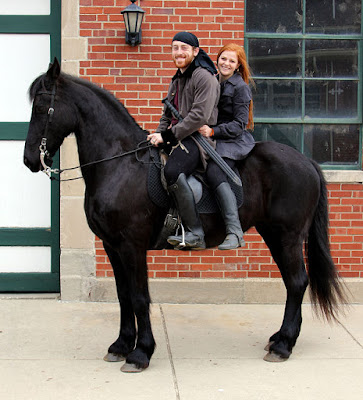 Below is Tyler and Samantha Stembridge on Indy. We met Tyler a few years ago when he started working for Hungarian Handyman (Fedi) He married Samantha last year and now we get two pirates for the price of ONE. 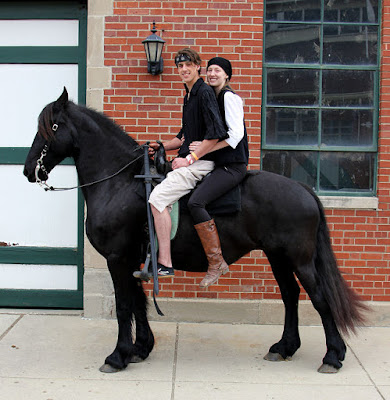 And the absolute STAR of the show was David Jacob Sauder as Captain Jack Sparrow. 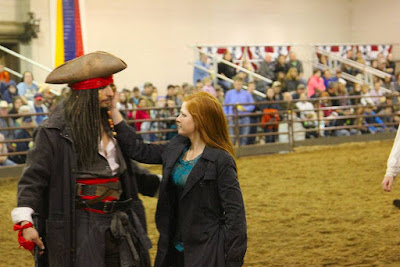 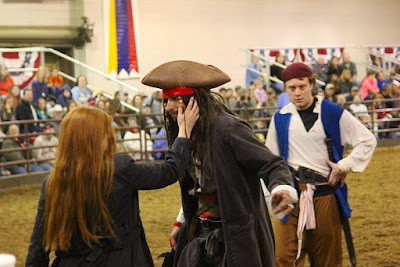 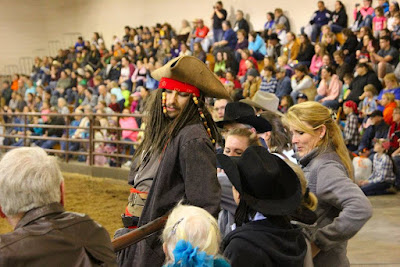 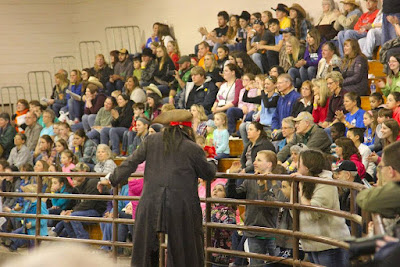 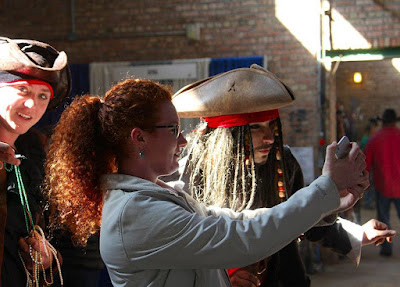 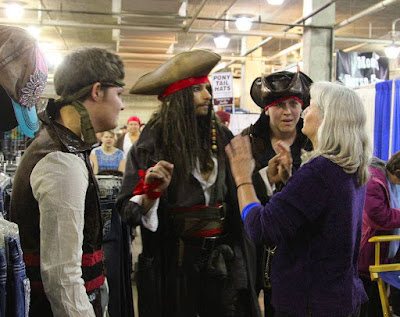 He was so convincing in his part that the breed and sport organizer asked if we found him at the university, asking "is he a theatrical major?" Our honorable mentioned are Jessica Sauder and Rebekah Schwind. Jessica was our photographer the entire weekend and took most of the pictures posted while Rebekah organized and choreographed the play. A special thanks to both of these ladies they are a true blessing to us.
Posted by Judy Sceggel at 11:38 AM