Today was not a great day, in fact it was frustrating and even a little depressing. At least it wasn't raining during our walk but started up not long after that. Anna was let out in the field for a few hours as it wasn't a hard cold rain. She enjoyed the grass and even laid down to roll with that big belly of hers. Laundry was started then out I went to clean the stall and bring Anna in before loading the mares that needed to go to the vet clinic. I've been suspicious that both Ayanna and Whitney lost their foals and wanted them checked out and Tory needed to be sonagrammed to find out if she actually ovuated. Rhoda covered Tory on Thursday evening not realizing we did not want her to get pregnant this month. If she settled she would be due the beginning of March and we are all pretty much gone showing at that time of year. My appointment was at 1:45 pm but I went out at noon to as Tory does not load well yet. 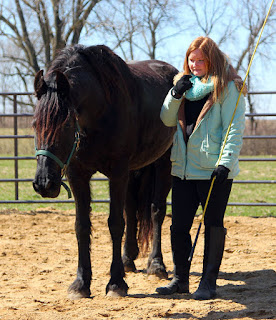 She will fine with 2 people but today I was here alone. Whitney and Ayanna were loaded first then Tory brought up and the first thing she did was to throw herself backwards and break a lead rope. She was just left loose while the other mares were fed and when she realized she wasn't getting any by running away from me she came right up. This time I walked her into the barn and picked up a whip. Tory freaked out at the whip. I wasn't going to beat her, it was just to encourage her not to go backward. It took a few minutes for her to realize she was expected to walk nicely and stay behind me, not run past. Of course all of this is being done in the rain. I was thankful for Mark's rain coat. She was loaded and I was on the road by 1:00 pm. It is a good half hour to Hoerr Vet clinic. Just as I was ready to cross the river Emma, the receptionist at Hoerr Vet clinic called to report that Dr. Hoerr was running late but I was too far to consider turning around. Hind sight I should have. I had to wait until 5:00 pm for Dr. Hoerr and then it was pretty much what I suspected. Both mares were not pregnant. Whitney is in right now and had a huge getting soft follicle of 62 mm which meant she needed to be covered tonight. 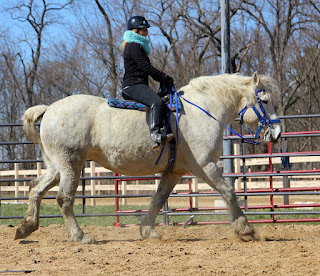 Ayanna wasn't sonagrammed, Dr. Hoerr just stuck his arm all the way in and he could not feel a foal. 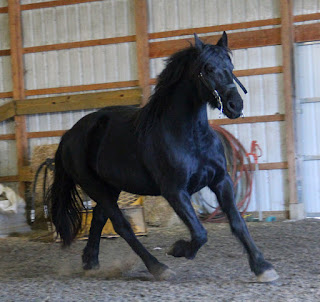 She will be taken to Middle Grove until the end of April then brought back and bred. Tory was last and she had ovulated probably yesterday. She was covered on Thursday and semen is only suppose to live 48 hours so hopefully she won't have settled. I was back on the road around 5:30 pm making it home about 6:05 pm. Whitney was taken right to the breeding stand to be covered but Valiant's lead rope, the one with the chain, was no where to be found. I searched both barns and around all the breeding stands before giving up and digging through the show stuff stored in the trailer. By the time Whitney was covered and Anna was moved into a clean stall I was late picking up mom for game night at Ruth's house.
That was the best part of the day, besides Ruth, mom, Hannah, Faith, Rebekah, Diane and I played and mom WON AGAIN! We had lots of laughs.
Anna is waxing but I do not believe she will deliver tonight. She is not at all restless and is content to just stand quietly or eat her hay. 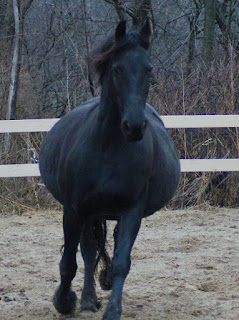 Rhoda picked out some music for the video of Evan we were uploading to youtube. Below is the finished project.