Tory In and Covered

I'm tired, I was tired when I woke up, tired when working on downloading the videos, tired when unpacking the suitcase and tired now. I think the euphoria and adrenaline rush from this weekend is wearing off.  Tory, the new Friesian mare was showing to Valiant today. 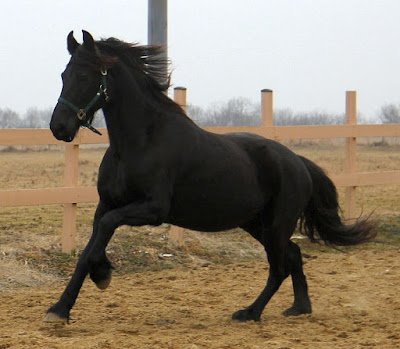 Valiant had no problem covering her. She is a maiden mare but stood well. If she conceives on this cover she will be due mid Feb. If she doesn't we won't breed her again until late April so as not to worry about her delivering while we are at the 2018 fair.  She was put back next to Evan and Eliza was moved back in with the weanlings. That makes it much easier to grain.
Just a few things were taken out of the trailers. We are having big winds and a storm is suppose to move in tonight. I should have unhooked the big truck and taken it to Meister's today but just didn't get that job accomplished. What did get done is laundry and cooking. I made a big pot of creamy chicken and wild rice soup for dinner tonight and tomorrow's Berean lunch and stuck a pecan pie in the oven as that was about the only ingredients here for dessert, then didn't watch it close enough and it is a bit over baked. Mark liked it though and ate a pretty big piece after dinner.
This evening Joan, Faith, Diane, mom and I drove over to Ruth's house to join her for game night. Tonight Diane won and I came in dead last. My brain was just too tired to think. Mark is out putting together a new tiller but I'm not waiting up for him that bed is calling my name.
Posted by Judy Sceggel at 9:19 PM