We awoke to almost 4 inches of new fallen heavy wet snow. The Galesburg schools were called off so Karin spent the day helping here. My first job was to shop, first at Big R's for 12 bags of grain and then to Aldi where I spent $106.00 proving we really were out of most everything. Do you know how hard it is to spend over a hundred dollars at ALDI?
As soon as Karin got here we took Evan to the pond pasture and let him run in the snow. We were hoping he would head across the dam but he was too busy showing off for the mares and didn't want to get too far away.


We took a few still shots then Karin took him into the round pen for a refresher. The snow kept falling making white pok-a-dots on the black horses. 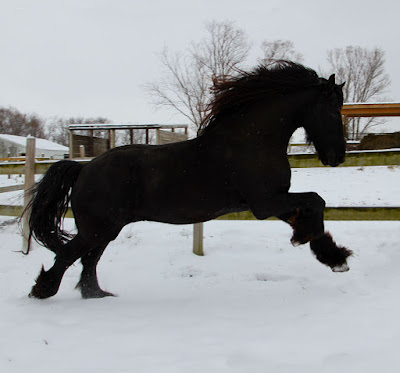 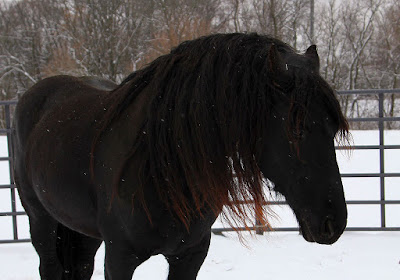 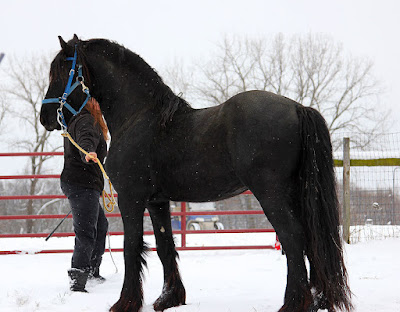 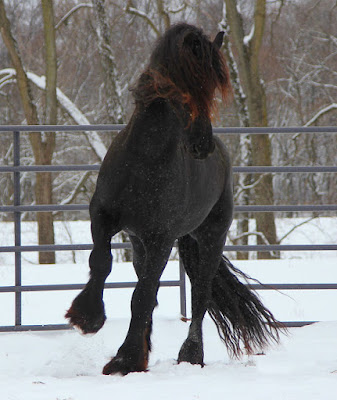 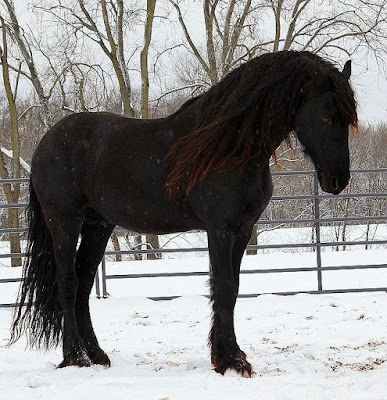 He was very well behaved. Next out was Tory. 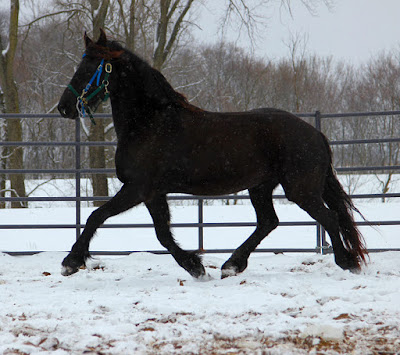 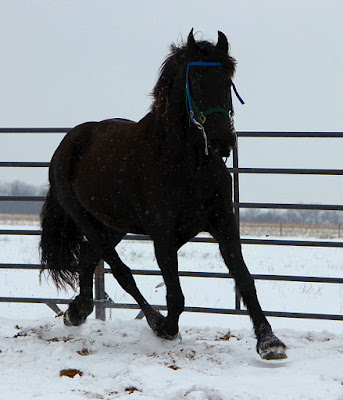 Tory is also doing extremely well. Both Karin and Rhoda remarked, "she is like her mom, Anna, a smart mare." She will be ready for undersaddle work when Rhoda gets here. Valiant was the last horse worked for the day. Karin worked him in the round pen while I cleaned the stall barn. Three of the stalls needed to be stripped. I'll let them set a few days then add fresh bedding and get the straw ready for when Anna goes into labor. Karin reported Valiant was sweet and reminded her of his mom Jenis, he really does want to please. I'm thrilled we have 2 stallions that are manageable. Our next job was to move a couple round bales in the middle paddock and one for Evan's paddock.
Flurries of snow continued most of the day. The driveway was shoveled off because I didn't want it to turn to ice tonight.
Tonight was game night at Ruth's Joan got there a little after 7:00 pm and was apologetic at being a half hour late. Ruth looked at her clock and chuckled asking Joan, "when did you think it was suppose to start?" When Joan replied 6:30 pm Ruth looked at her clock that was reading 6:00 pm and exclaimed,  you are early. How funny that she forgot to change that clock 2 days after the time change. Mom and I also showed up a bit late but we had 7 players tonight. Anni had an exceptional game and won by almost a hundred points.
Posted by Judy Sceggel at 9:43 PM