Joan was a little late for the walk this morning. Today is Faith's birthday and in Joan's house they have a tradition of breakfast in bed for the birthday girl. Faith picked out her menu the night before, writing down she wanted french toast, bacon and hot tea with fruit optional. Joan, Berlica, and Mackenson all snuck into her room bringing the breakfast, woke her up with the birthday song. Faith was sleeping on the edge, rolled over the wrong direction and promptly fell out of bed. Below she is praying before she digs in on this her 10th birthday. 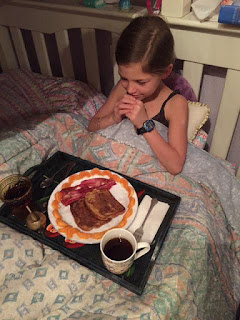 It was easy again to clean up the arena but tomorrow morning won't be quite as easy. We now have 3 mares all with big udders spending the night in the indoor. Anna is now 4 days over due, Zalena who isn't due until April 23rd actually has a bigger udder than Anna and just today Hadassah's udder swelled. She is due April 5th but went 3 weeks early with her first foal. None of the mares are waxing but I would rather do a little more labor than take a chance on a mare delivering outside in this cold with this mud around.
Cindy Endress and I typed in all the Bible requests at the Berean office while Mary Ginzel and Carol Rieker folded studies. 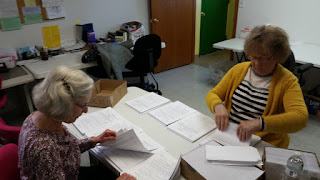 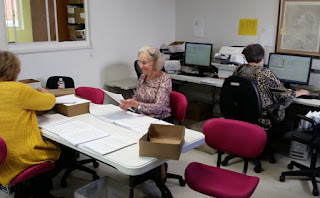 The day was sunny and if one just looked outside would think we had a beautiful spring day except it was COLD. The temperature was hovering at 37 degrees when I got home this afternoon and the house was cold. A fire was started and of course by the time that heated up and lunch was done there was no way I wanted to go outside to work. A little later when I finally did go outside it was to discover the tire on my car quickly going flat. When Mark got home the car was moved into the back garage so he can change the tire out of the wind tomorrow morning. If it isn't done in time I can just take his car to work tomorrow. We had a very nice email come in last night which I posted below:

Hello, my daughter & I saw your beautiful horses at the Horse Show in Springfield Illinois at the beginning of March, and was smitten from that moment. I am hoping to get a chance to speak with you about your magnificent horses. I know from volunteering at the Midwest Equine Horse Rescue, that finding a spare moment isn't always easy.  If you could let me know when would be the most convenient to call. I look forward to speaking with you. The horses are extremely beautiful. I love the pictures on your blog of the horses kicking it up. Then I got to the one where it is sitting down and laughed out loud. Not something you see a lot of horses do.  I look forward to speaking with you tomorrow.

He did call and is coming to see the horses on Friday. We were suppose to have 30 square bales delivered on Friday and he even offered to help unload and stack but the hay guy just sent a message that he would like to bring the bales on Monday instead so no free labor.  Oh well it is only 30 bales.