Sissy was teased and still in so covered this morning. When we were putting her back in the stall Emily remarked she hadn't eaten much hay last night and didn't touch her grain. She didn't seem to be in distress but needed to be watched. She has lost some weight nursing her big filly so we started giving her the 4th cutting fine stemmed hay and my first thought was maybe it was too rich. I had to leave to run down to the shop and load boxes of Bibles and all the supplies for wrapping into the car and drive them to Ruth's as she was hosting the young group to get them wrapped.
When I arrived home Emily and Rhoda had pulled Holly out to take her trail riding at Sandridge and discovered that Holly somehow got a huge gash on her shoulder that would have to be stitched. Dr. Hoerr was called and he promised to be out in a couple of hours. The girls loaded up Anna and Indy for the ride and left. While I was waiting for him Dan showed up with his 5 month old Great Dane puppy Diesel. He played so cute with Emma's last puppy which  was scheduled to be picked up today by her owner. 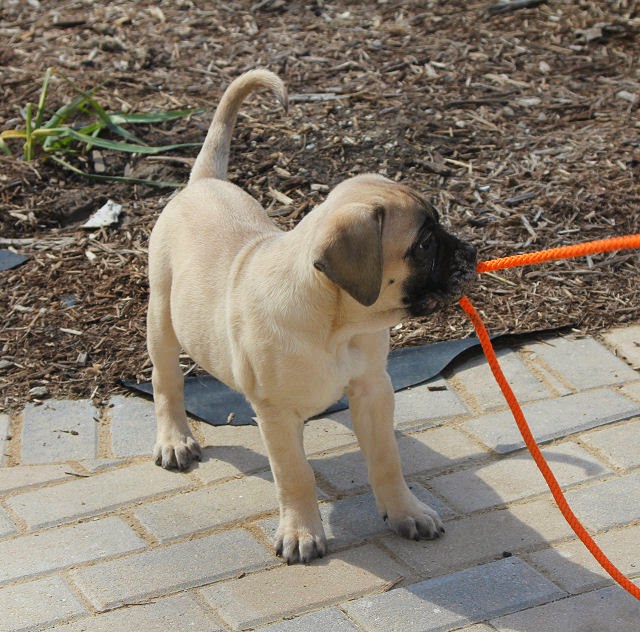 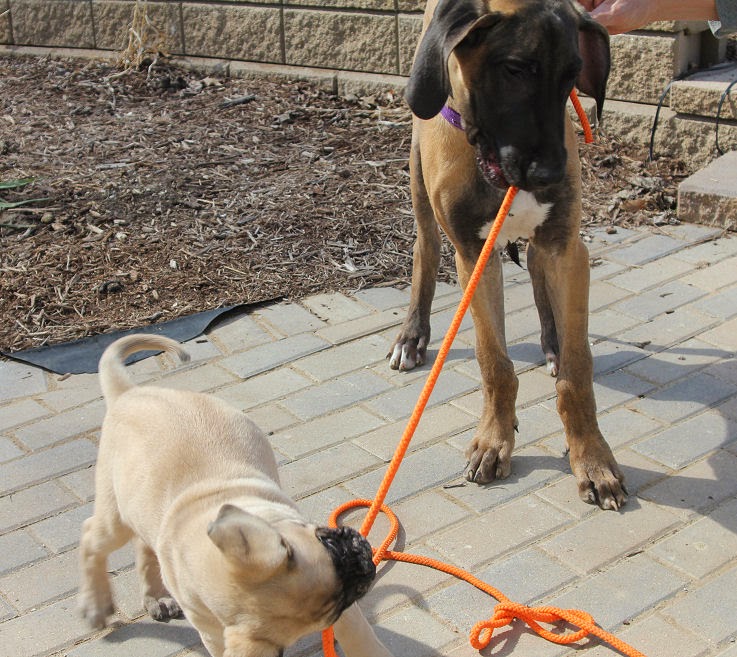 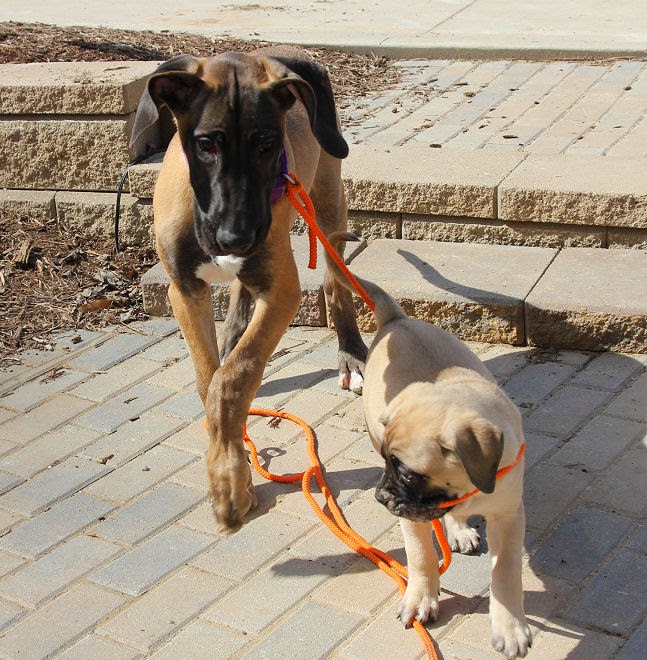 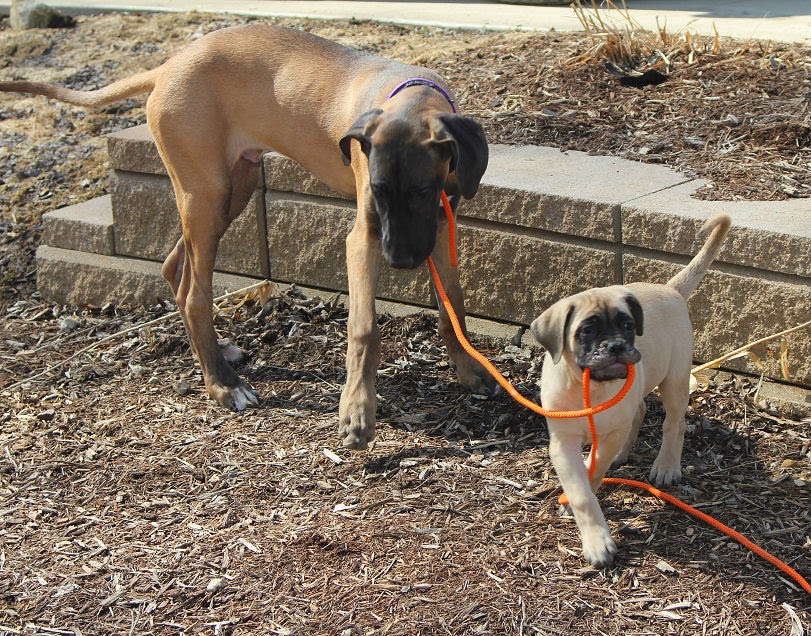 She is such a bossy thing! Dragging poor Diesel all over.
Dr. Hoerr arrived shortly after 1:00 pm. Sissy still wasn't feeling well so I asked him to check her out too after he stitched up poor Holly. Now for the record we don't think it was a big cat attack but sure looks like the result of one. We couldn't find anything in the paddock that would have caused this. 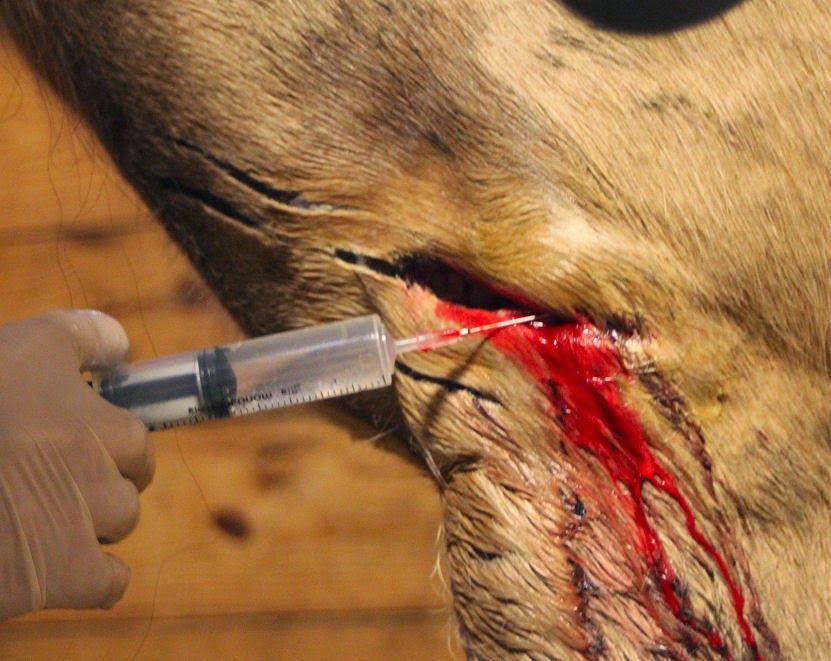 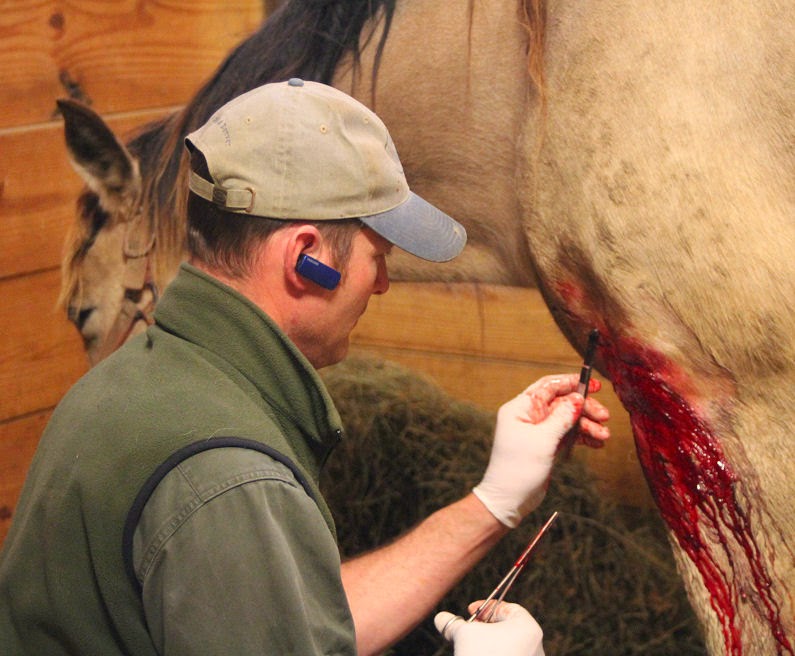 Diana, the last puppy's owner arrived as he was working on her so got to watch first that and then watch Dr. Hoerr stick his arm in where the sun doesn't shine all the way up to his shoulder checking for a twisted colon. Sissy was given a shot of banimine then tubed through her nose into her stomach then pumped full of his magic solution. She was very well behaved for both procedures.
The girls made it back from Sandridge with some funny stories. This is Anna getting out of the trailer. 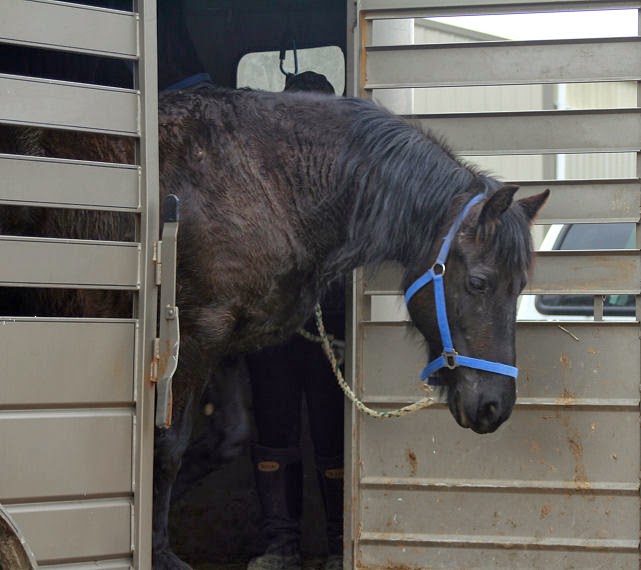 She looks like that because after they rode the 5 mile trail they let both mares have a good roll. There were other riders there, when Emily brought Indy up she asked her to bow first, then lay down and just shocked the other riders. I guess you don't see that very often on the trails.
After the mares were unloaded Emily looked over and noticed Promise stuck under the fence. 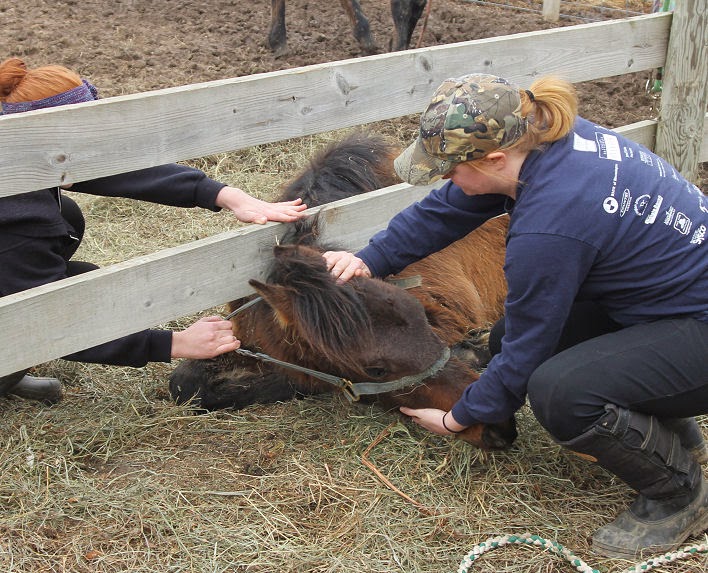 I guess the grass or hay is always greener on the other side of the fence. 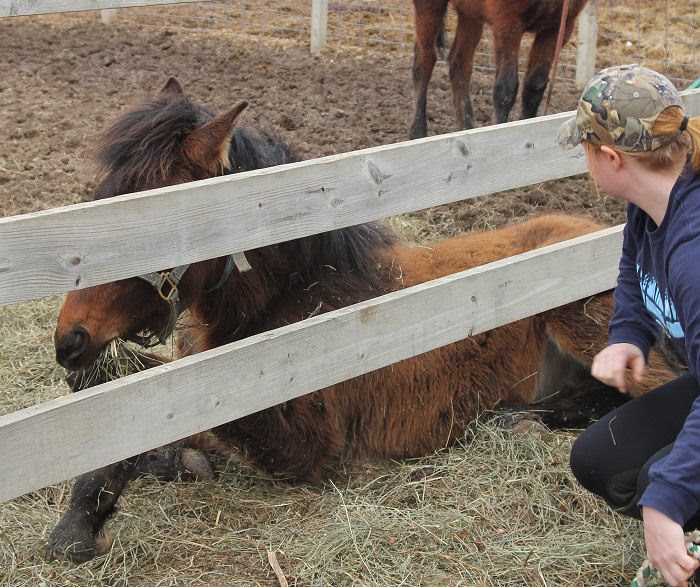 Notice she kept eating the entire time they were putting her back under the fence.
Emily then work with Rhiannon in that paddock while Rhoda took Promise to the indoor arena. Both girls got round penned then tied. 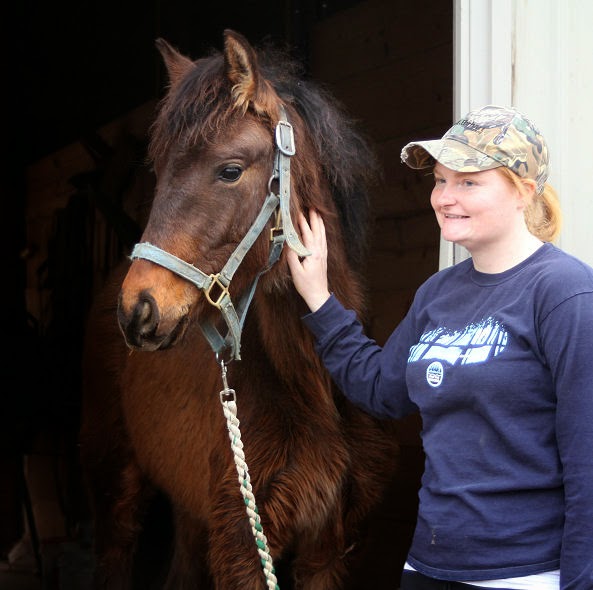 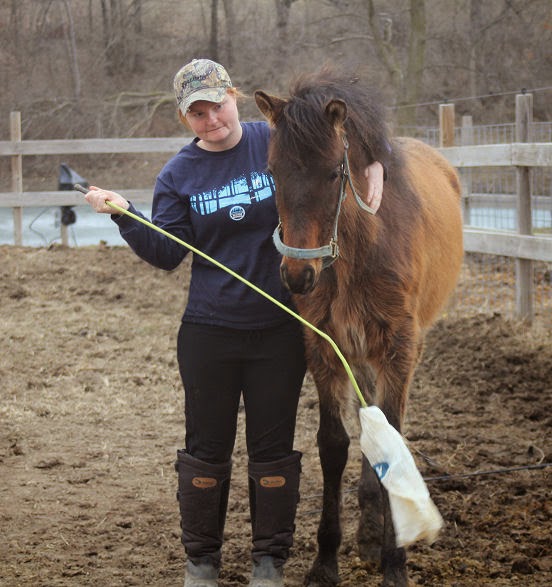 Above is Promise, below is Rhiannon 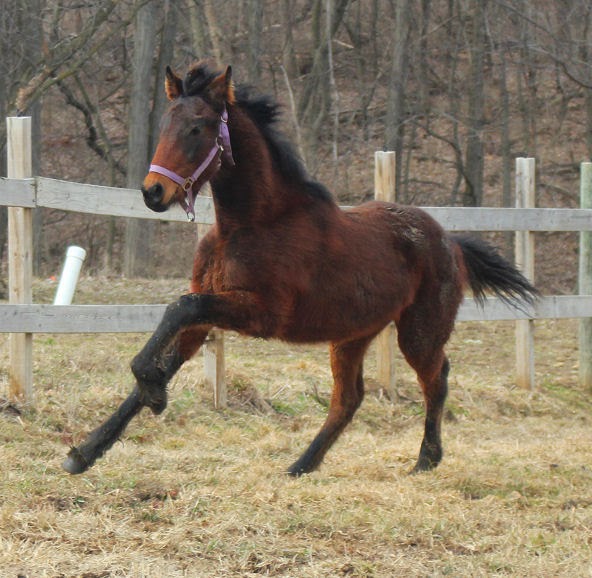 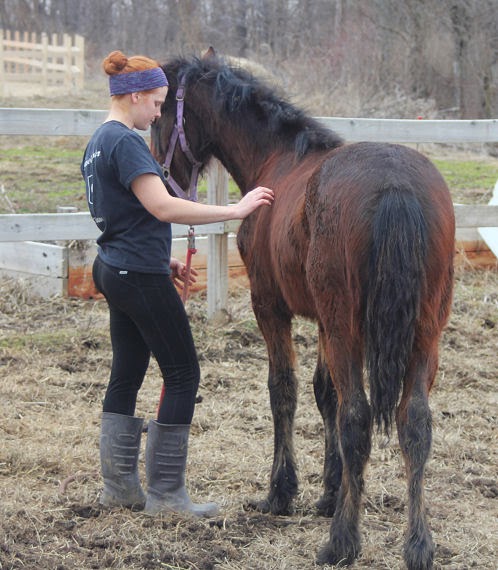 Both fillies have a very thick winter coat and it was really needed this winter. They both did very well. Rhonda and Tara showed up with 3 of Tara's girls and they wanted to go see the babies. Dancing Ember, Sissy's filly was glad for the attention. 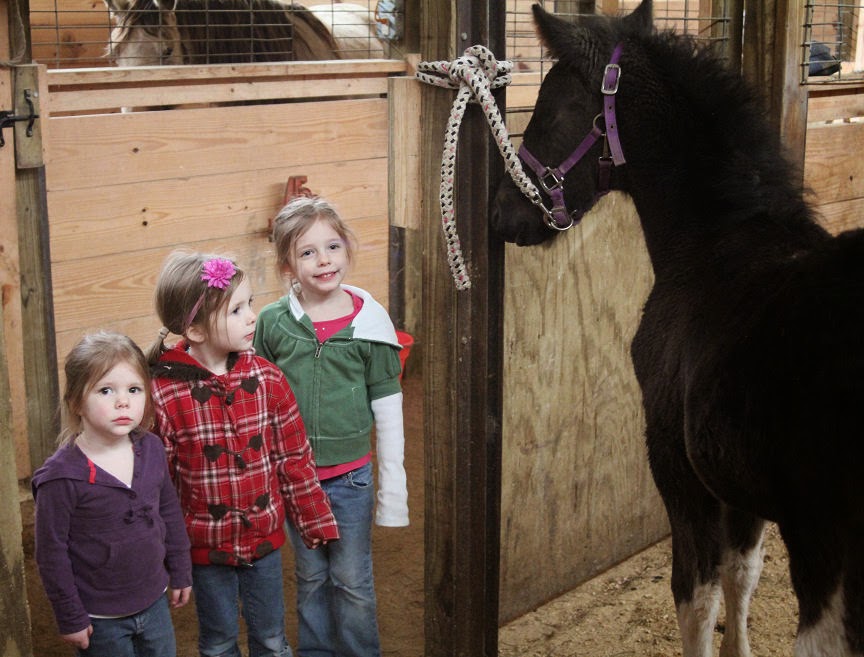 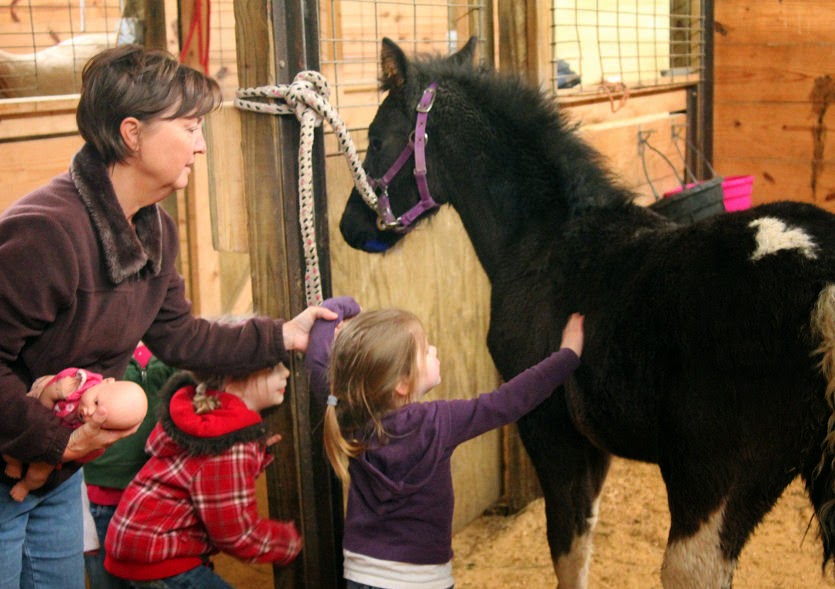 Notice that white spot on her rump? Rhoda pointed out that it is shaped like a heart. 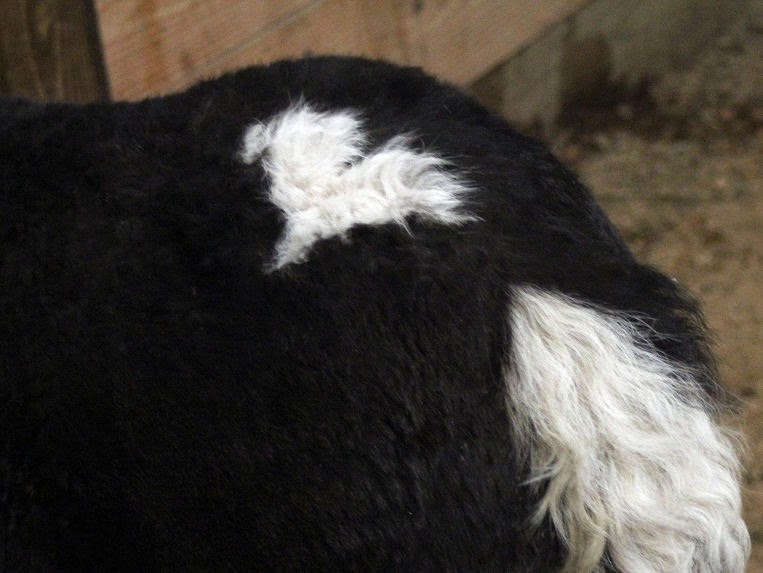 Holly wanted to meet the girls too. When the stall door was opened she came right up to them. 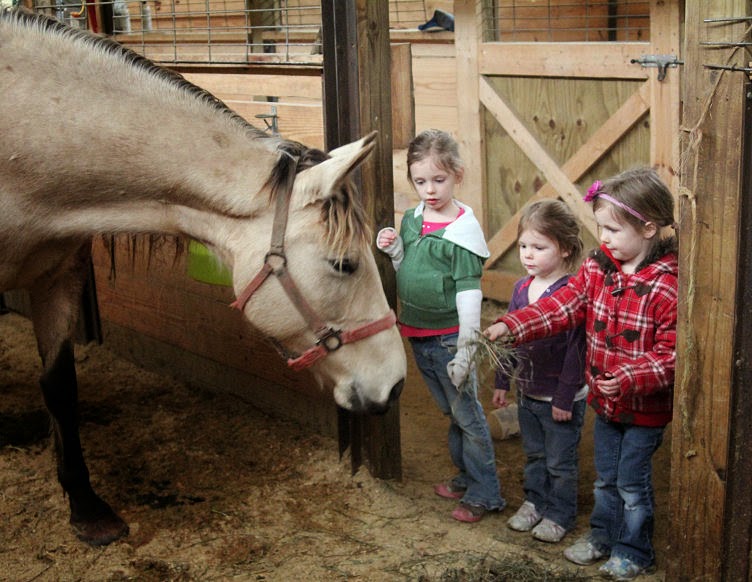 Emily and Rhoda just got back from Ruth's house where they were wrapping Bibles. They had a good sized group there and were just about able to finish all the boxes until they ran out of the letters and lessons we stuff inside. My bad, I should have made sure there was enough. Anni Davidovic said she would finish wrapping them later. Emily checked on Sissy and reported she doesn't seem to be in distress, there was one pile of manure in the stall and it was obvious she had eaten some hay. Sure hope she is on the mend.