Lilly, the 5 month old Shih Tzu puppy is now sold. She will stay with Rhoda until Thanksgiving then be picked up. 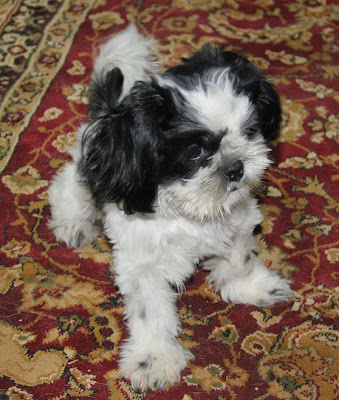 She is getting a wonderful home. We had a very cold start to the day and snow was spitting at us on our frozen walk. Thankfully Mark had the wood burner going full blast and the living room is nice and toasty. Killian is now locked up in his paddock and the 3 mares, Missy, Cookie and Katy were put in the pasture next to Valiant's so they all had access to an automatic heated waterer. Tomorrow we will be taking those three mares out to Middle Grove and bringing back a couple foals for weaning along with Soul who will taken to Hoerr Vet clinic for an ultrasound to make sure she is still pregnant.
Check out the hair on the stallion below: 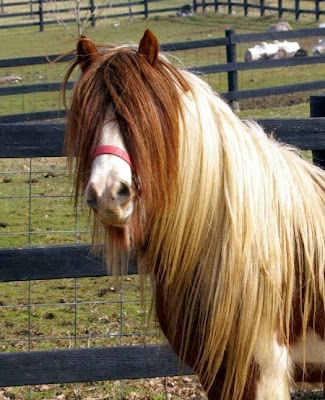 This is Katy's sire Lively Leo. He is a 14 hand purebred Gypsy stallion standing at stud at Guardian Spirit Farms. He has amazing feather and it looks like Katy is going to look very much like her dad. 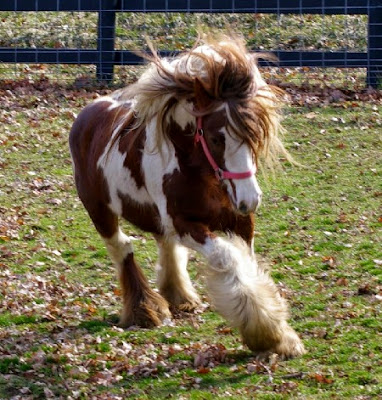 Amy Koch stopped in with her new puppy Hank. Hank is an English Shepherd dog who will be standing at stud in Tremont, IL. English Shepherds are smart herding dogs and are very loyal. Amy is going to be raising them.
We were almost late for church tonight, in fact it was a miracle when we made it with 10 minutes to spare. We left a few minutes early because of needing to stop at Diane's to pick up the prisoner studies to take to church for grading. They were in the back of her van. I couldn't figure out how to open her back and had to climb over a second and third bench seat to get them. Then we got to mom's and she was late coming back from Spark and Rhonda's, but at least she wasn't outside waiting for us in the cold. Plus the car was completely out of gas, barely had enough to get us to Hanna City for a fill up. It is just so cold outside there wasn't much traffic. Church was terrific. Tim Funk had the message of putting off the corrupt and putting on the new. What a wonderful way to spend the evening, worshiping with like minded believers.
Posted by Judy Sceggel at 9:33 PM